Before writing the narrative for these website pages about convict ships from Britain to Australia, I normally research the various topics in order of their appearance on the page.

Asia was no exception, and thus I was aware that five convicts died on that voyage.  Every source I routinely consulted for Asia’s numbers of convicts boarding and landing stated 230 and 225 respectively; five died.

A few more topics along, I reach the ship’s journal.  The first thing I check is the Nosological Abstract (or Synopsis as it was termed after 1838). This is a statement of the number of passengers listed in the Sick Book, divided into four disease classifications with up to eight subgroupings.  Superintendent Surgeon Thomas Galloway RN, had clearly written 10 in the ‘died on board’ column; of course, I was expecting only 5.

This led me to check the names of those in the Sick Book who had been recorded as ‘died’.  They were all convicts and their names were clearly written with the date of first entry in the book, the date they died, and the cause.  My next step was to cross-reference the detailed case notes written by the Surgeon about each patient – all were present and matched the names and particulars in the Sick Book.  And here they are:

The Surgeon’s general remarks from his Journal include the following comment about the cholera cases:

On the first night after embarkation several men were found with Diarhoa (sic), which, from the stock of bread, butter, sugar etc brought in their little bundles from Justitia, I was led to treat lightly, supposing it the effect of over indulgence in eating as many of the Prisoners had been for sometime previous on very meagre diet. More especially, as on enquiry both of the Surgeon and Assistant Surgeon of the Hulk, I was assured there had not been for a long time, any bowel complaints amongst the convicts.  When the first case of Cholera took place, finding it had followed overeating, and further that all the members of that sleeping berth had been washed in cold water the morning of their embarkation and subsequently stood for some hours in an open shed in Woolwich Warren until the remainder of the draft had completed their ablutions and inspected, I considered it as an accidental resemblance of disease without any specific characters, but on arrival at Sheerness when this patient who had been convalescing for three days suffered a relapse, followed by other cases of Cholera, and Diarhoa (sic) appearing the same evening, I felt convinced of its being in every respect the prevailing epidemic although I had failed to trace its origin, and instantly adopted every measure in my power to arrest its progress.

The Surgeon recorded 24 cases of cholera and 19 recovered in his Nosological Abstract. One of them was Corporal Julius Delmage who later served in Western Australia before leaving for India with the 21st Regiment on 23rd July 1840.

I then returned to the online sources of the boarded and landed numbers. Except for the Dead Persons Society, I don’t know from whence the online sources derive their numbers, but they would certainly all lead back to the NSW Convict Indents, perhaps supplemented by the British Home Office Transportation Registers and even Prison Hulk Registers if anomalies occurred or data was unclear.  And here they are: 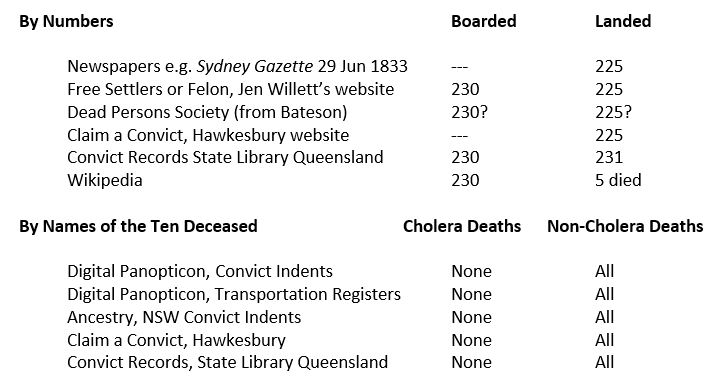 I cannot explain the State Library Queensland ‘By Numbers’ record above. It not only records that as many convicts landed as boarded, but actually finds an extra one. However, this site accepts contributions from its readers which may explain the discrepancy.

I dabbled in the online original records of the Home Office Transportation Registers offered by the National Archives, Kew.  HO11-9 had been filmed and then digitised and offered as a download.  I found Asia’s sailing date immediately and just as quickly identified the non-cholera deaths on the voyage, but none of the cholera victims was recorded.

The question, of course is, were these deaths expunged from the Australian records?  Was this an orchestrated cover-up of cholera deaths on board.  Why were records of these men extant prior to boarding but not after landing?  And does it really matter?

These five cholera victims were once someone’s son, perhaps husband and father. The chances of them ever again connecting with their families may have been remote, although not impossible.  But what of those who seek their origins by way of our 21st century love affair with genealogy and family history, using the tools of records 200 years old or more? Working backwards from what one knows may well hit a brick wall when five men disappear between England and Australia!

Postscript
It was not until after the terrible outbreak of cholera in 1854 that Dr John Snow was finally able to convince his own profession and the government of the origins of cholera. His discovery of a pathogen at the Broad Street water pump and his evidence thereafter, was certainly not in existence at the time of the Asia’s voyage of 1833. A second pandemic had reached London in 1832, ultimately causing around 55,000 death in Britain. Thus, Surgeon Galloway would have known of a cholera epidemic around the Thames, but nothing of the origins of the disease.