In January, I continued to research and write about a convict ship which brought the 99th Regiment convict guards to Australia. I posted a page for Isabella 1842 which brought WA settler Private Michael Golden to Van Diemen’s Land with the convicts, then on to New South Wales to join his regiment, and eventually Western Australia where he took his discharge and became a settler. Isabella was a difficult ship to research – as many other researchers have discovered to their peril. The reason? She is not to be confused with a Whitby-built ship of the same name transporting convicts to NSW in 1840. In any one year, Lloyds Register lists up to 20 different ships sailing with the name Isabella.

Another new page was posted for the Kelmscott/Canning Military Post. The Barracks was built by a handful of 63rd Regiment soldiers in 1830/31. It garrisoned an average of five to six soldiers throughout its life as an outpost, accommodating troops from the 63rd, 21st and 51st Regiments. The last soldier at the Barracks was Corporal Thomas Suxspeach of the 51st who remained on the post until March 1843.

During February, I will be posting a page for another 99th Regiment convict ship to VDL and NSW … Navarino 1843/43. She brought eight soldiers to eastern Australia who would eventually serve in the West, two of them settling here.


For the first meeting of 2023, we welcome Rob Endersbee, one of the founders of the Merredin Military Museum.  The Museum houses an incredible range of personal stories and items as well as WA’s largest collection of restored military vehicles and equipment.  Rob has devoted his life to preserving Australia’s military service and has a wealth of knowledge to share.  In his talk to the Military Interest Group, Rob will cover the Wheatbelt’s important role during WWII and talk about the museum, how it formed, special items of interest and some of the research he has done and where it’s led!  Registration is via the Family History WA website – members and affiliate members free to attend, non-members $5.

Straight off the Press 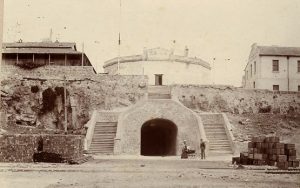 The roundish stone building which appeared on Arthur Head at the western end of High Street, Fremantle in 1830, still puzzles visitors to the port.  It might look like a fort but for the 25 years after it opened in January 1831 it was Western Australia’s most important gaol. Words from the inside cover of a new book about the early years of WA’s oldest building – and how it survived. From Hesperian Press we have ‘The Round House 1831 to 1856′ by Steve Errington, 2022.  On sale now http://www.hesperianpress.com/.

God and the soldier we both adore
When at the brink of ruin, not before
The danger over, both are alike requited,
God is forgiven, and the soldier slighted.
[A rhyme popular in the days of Marlborough]

The first British Redcoats to garrison in Australia wore red tunics and white trousers, but these were not the Army but the Marines who arrived with the First Fleet in 1788. The first red-coated soldiers to arrive, in 1790, were in the New South Wales Corps, formed in Britain, very soon after to be known as the Rum Corps. The first line regiment to arrive in Australia was the 73rd Regiment of Foot (1810) and, of course, its soldiers wore redcoats. However, this website is dedicated to Redcoats in Western Australia and the first of these came not from Britain, but from New South Wales.

Due to the presence of French survey ships in the seas around the Colony of New South Wales, it was feared France may lay claim and settle the deserted West Coast of New Holland, motivating the British Government to consider establishing a settlement there to protect its interests. In a letter dated 11th March 1826 Earl Bathurst instructed Governor Darling that if found suitable, a settlement should be established at King George’s Sound as it was located on the shipping route between Britain and Port Jackson. Despite his reluctance Darling complied with Britain’s wishes and ordered an expedition to be dispatched. 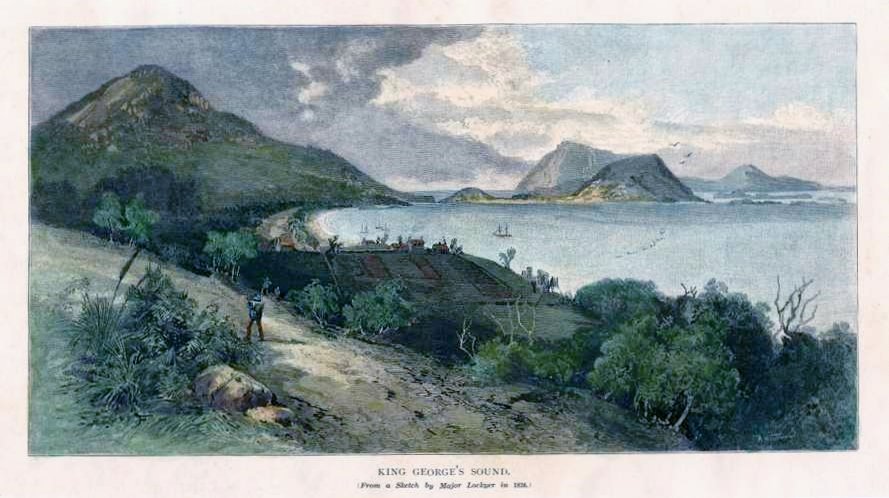 Major Edmund Lockyer, 57th Regiment of Foot arrived in King George’s Sound on Christmas Day 1826 on the brig Amity. The original military post comprised Captain Joseph Wakefield, one sergeant, two corporals and 16 privates of the 39th (Dorsetshire) Regiment; Ensign Edmund Morris Lockyer, 57th Regiment on detachment to 39th (Storekeeper); William and Thomas Wood, Royal Veterans Corps (Convict Overseers). A surgeon, a gardener and 23 convicts made up the balance of that first settlement. Major Lockyer was appointed Commandant. Over the next four years or so, there would be three other Commandants, all of the 39th Regiment: Captain Joseph Wakefield, Lieutenant George Sleeman and Captain Collet Barker. During their term in ‘Frederickstown’ (the name of the settlement declared by Lockyer on 21st January 1827), other Redcoats and civilians came and went; more convicts arrived from NSW and some escaped.

Not only did the settlers of Swan River object to the presence of convicts within the Colony, but Captain James Stirling was unhappy about having a military outpost in the West under the command of the Governor of New South Wales. It is likely that even had the KGS settlement been successful, Stirling would have intervened.

A new detachment of Redcoats of the 63rd Regiment had arrived in Frederickstown on Isabella on 19th March 1831. It was this ship that took the 39th Regiment detachment back to Sydney, along with the civilians and convicts who had settled there over the previous four years. The region was now declared to be under the control of the Swan River Colony. One convict was officially allowed to remain at his own request; others had escaped and not been captured; none of the 39th Regiment of soldiers took a discharge from the Army in the new Colony. But at least one of the original complement was left permanently on Frederickstown soil: Private William Banks who had died and was buried on 8th March 1827. On 1st January 1832, Frederickstown was renamed Albany.

Thus we begin the story of the Redcoats whom, after serving in many parts of Western
Australia, discharged from their various regiments and settled in this Colony/State.

For further information about the scope of the Project and how the website works,
click this link to About.