Nowadays, military establishments are usually termed ‘bases’ – perhaps the American influence. In the past many terms have been used – with not a little confusion: military posts, cantonments, outposts, outstations, garrisons, depots, barracks.

Upon arrival, the Redcoats of the various detachments were almost immediately despatched to the Colony’s military posts. Over the period of their service in Western Australia, over thirty locations were established. I hope to be able to provide information on the most significant of these.

There has been a better survival rate of ‘convict places’ and indeed the archaeologists and academic historians have given much attention to those structures. The Redcoat Military Posts may prove a more difficult subject on or under the ground!

This is a work in progress – and my future research may prove me wrong – but I understand that Kojonup Barracks may be the only structure standing of the military posts in Western Australia. The Barracks, in this case using the term specifically for soldiers’ accommodation, has no doubt been changed slightly, but basically remains the design built by and for the 51st detachment in 1845. 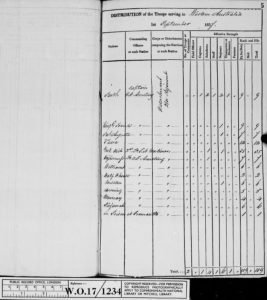 The National Library of Australia is well advanced in its programme of digitising the microfilm of the Australian Joint Copying Project (AJCP).

This includes the WO17 Monthly Returns from 1837 to 1865; troop distribution figures are part of this return. The names of the men are not present and unfortunately the timing and distance involved in the recording of the numbers of men, often do not necessarily reconcile with those to be found in the WO12 Musters and Pay Lists mentioned below. The WO17 Returns are also not early enough to cover the distribution around the Colony of the troops of the 63rd and some of the 21st detachments. These may be found in the Colonial Secretary’s Office (CSO) records in the State Library.

The WO12 Quarterly Musters and Pay Lists provide the names of the troops, and in most cases where they were deployed each month. The earliest records I have found for the postings of individual soldiers in the Colony, is in WO12-7262 folios 242-260, 25th March to 24th December 1830, where 63rd troops posted to Port Leschenault, the Interior, Murray River, Port Augusta, Upper Swan and Kelmscott/Canning are mentioned. Click here for more information about War Office records.

In the example above, the 21st Regiment’s troop distribution at military posts for the month of September 1837 is shown. York scores one lieutenant, one sergeant and 35 rank and file; Kojonup one lieutenant but only seven rank and file.

As research progresses, more information will be available on the Redcoat military posts in Western Australia.