The major military posts in the Swan River Colony were established early in the Colony’s history and were populated by a number of men from different regiments. This was not the case with Champion Bay and Sharks Bay. The 99th was the only regiment deployed at these two stations.

To be precise, Champion and Shark(s) Bays were, and still are, a body of water; thus obviously a military post was not located thereon. ‘Champion Bay’ military post covered the town sites of Geraldton, Port Gregory and the Geraldine Minesite. ‘Shark(s) Bay’ military post (sometimes called Irwin Station) covered Dirk Hartog Island comprising Quoin Bluff and Guano Rock, and Eggshell Island. However, the Musters and Pay Lists describe the deployment of 99th Regiment troops at either Chamption Bay or Sharks Bay, thus recording that Her Majesty’s Army did indeed walk on water!

Arrival in the Colony of the 99th Detachment

The main force of the 99th Regiment detachment to the Colony arrived on 7th April 1849 on board Radcliffe (aka Ratcliffe) from Hobart, Van Diemen’s Land via South Australia. The 99th’s total strength landed on that day was 106 men; the Assistant Surgeon, George T Galbraith remained on board for a further four weeks. The detachment upon arrival comprised two officers, Captain George Marmaduke Reeves, Lieutenant L R Elliot, Ensign William H D R Welman, five sergeants, a drummer and 97 rank and file soldiers and the Assistant Surgeon already mentioned. Eighteen men from the 96th Regiment joined the 99th, most of whom were remaining in the Colony pending approval of their discharge from the Army. Three other men of the 99th arrived in the Colony later – two soldiers and Assistant Surgeon H H Jones, the latter to replace Galbraith when he was re-assigned in 1851.

Within six months, it was apparent that some of the 99th would be required to set up a military post in the midwest of the Colony in the area known as Champion Bay. The troops were to protect and assist with the mining operations at the Geraldine Mine. On board was John Purkis, Commissariat Officer, who would be in charge of the considerable amount of stores and equpment required for this venture.
Click here for the names who embarked on the Colonial Schooner Champion on 18th November 1849 and disembarked ten days later on the remote coastline known as Champion Bay. 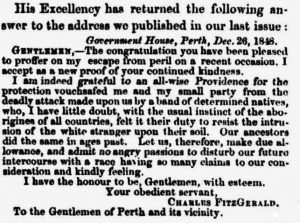 The ‘protection’ required by the 99th troops was about ensuring that the workforce of the Geraldine lead mine, the mining equipment and settlers in the disrict would not run into problems from the local aborigines. The incident encountered 12 months earlier by A C Gregory and Governor Fitzgerald’s expedition was still fresh in the minds of those pursuing interests on ‘pre-owned’ land in the Colony … hence the ‘softly, softly’ approach expressed in Fitzgerald’s open letter.

The ‘assistance’ required by the 99th troops commenced In early December 1849 as soldiers began working alongside miners. The work, was presumably organised by the mine superintendent, pastoralist Lockier Burges. A mine shaft was excavated on the (then) dry bed of the Murchison River. This positioning was to cause problems with future flooding. However, mining the first five tons of lead ore augured well for a successful venture. 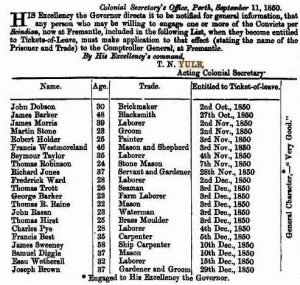 The presence of the soldiers and the miners at the Geraldine lead mine in late 1849 pre-dated the arrival of the first convicts to the Colony; it would be another 12 months before any ticket-of-leave men from the Scindian would become part of the workforce at the minesite.

Scindian arrived at Fremantle on 1st June 1850 with 75 convicts on board. The first convicts at the minesite may well have been some of those whose tickets-of-leave were imminent. Fifteen of the men on the list (left) were not on a similar list the following month. All of them had useful trade backgrounds and it could be they were picked to join the party leaving on Evergreen on 16th October 1850.

The Geraldine Mine had, from its inception, employed ticket-of-leave men; the first was ‘JB’, a blacksmith taken on at 20s. per week as early as 1850. By the end of 1852, there were 25 ticket-of-leave men working at the minesite and living in a ‘rough but capacious’ hammock shed that they had built for themselves [Campbell:42]. 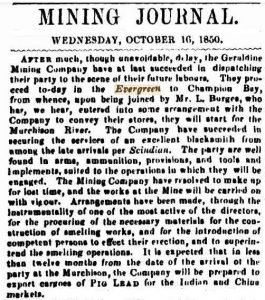 From newspaper references and the above source it is clear that a blacksmith was working at the Geraldine Mine by October 1850; this would have been convict #48 James Baker (incorrectly spelt on the TOL list). On 23rd February 1847, he had been convicted at Devon County Sessions on two charges of stealing fowls and was sentenced to fourteen years transportation. He had been incarcerated in Exeter and Wakefield Houses of Corrections followed by Millbank and Portland Prisons before leaving Portsmouth on 4th March for Fremantle. Baker was born c. 1802 and was married with two children when convicted.

Certainly the workforce of soldiers and convicts was busy building at the minesite. In its Assessment Documentation, the Heritage Council indicated that the place is composed of a number of structures … identified on the site include: the Engine House (c.1851), Mine Manager’s House (c.1851), Ore breaking floor (c.1851), Cemetery (c.1854), Mine Shafts (1849), and the Ore processing site (c.1860s).

The War Office Monthly Returns for January 1850 show that Champion Bay had exactly the same number of men on duty as had been present in 1849: Lieutenant L R Elliot, Sergeant #1470 Henry Thackery and 29 rank and file. However, on 8th February 1850 the complement of troops was reduced by General Order #2 by Commandant F C Irwin. Owing to the suspension of operations of the Geraldine Mine, from 1st March the rank and file at Champion Bay was reduced to 15 men. And in August this fell to 14 with the death of Private #2278 Andrew Murphy; he died on 8th August 1850, cause unknown. By September the Champion Bay complement was back up to 15 rank and file. However during September 1850, more men were sent to Sharks Bay and another military post, 500 miles from Perth, was established. But why was this new establishment needed?  Read on …

Seabird guano (excrement), produced by cormorants, boobies, and pelicans on the three tiny Chincha Islands off the coast of Peru, had a remarkably high nitrogen content that promoted plant growth – a natural manure. From the early 1840s, it was commercially mined, transported, and sold in Germany, France, England, and the United States. In fact the government of Peru had a monopoly on the ‘stuff’. The trick with Peruvian guano was that as it rained very little on these islands (less than one millimeter annually), the lack of precipitation meant no leaching out of the nitrogen. Later in the century, wars would be fought by protaganists Spain and the United States over the Peruvian ‘white gold’. 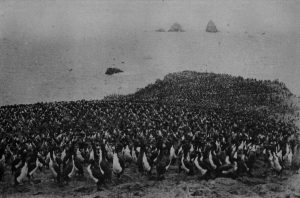 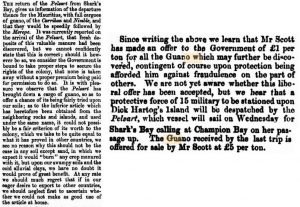 In December 1849, the most westerly region of the Colony of Western Australia would be the scene of further guano wars (or maybe ‘squabbles’ would be a better word). Daniel Scott, Fremantle Harbour Master and entrepreneur, identified good deposits of guano in the Shark Bay area while on an expedition on the ship Pelsart. Scott set up his mining venture quickly and by mid-1850 had ships exporting guano to Mauritius. It didn’t take long for word to get out, even as far as Britain, when it was rumoured a ship from Younghusband & Co. of Liverpool was on its way to plunder the guano after dropping off immigrants in Sydney. Of course the pastoralists and farmers among the colonists naturally felt that the guano stocks should be available for their crops, and called upon the government to ‘do something’ (nothing changes). Governor Fitzgerald would have been torn between supporting enterprise and/or the colonists, but at the same time filling the Treasury’s coffers with tax revenue. And all the while as Governor of a British Colony, he was at the mercy of the Secretary of State for War and the Colonies, 3rd Earl Grey back in Britain (whose merchants also had an interest!).

Lieutenant Elliot and his troops of the 99th Regiment were already at the Champion Bay military post but 11 additional men were sent from Perth to protect the guano deposits from force or ‘fraudulence’ of others. Click here for the names of the privates who are recorded in Sharks Bay in September 1850; Lieutenant Elliot joined them in October. It is surprising that no General Orders about all this from Commandant Irwin are extant between 31st August to 1st November 1850. This could mean that the documents did not survive or that Irwin was understandably distracted by the military and administrative matters asssociated with the arrival of the convicts and their 55 pensioner guards, as well as Captain E W Y Henderson and the first small (5) contingent of Royal Sappers and Miners in June of that year.

The number of troops at Champion Bay and Sharks Bay flunctuated up and down, back and forth, throughout 1851 until November of that year, when Sharks Bay military post recorded no troops present, and Champion Bay was reduced to 13 rank and file; Lieutenant Elliot and Sergeant Thackery were no longer on strength in this region.

Click here for a more detailed narrative about the emergence of the guano industry in the Colony. 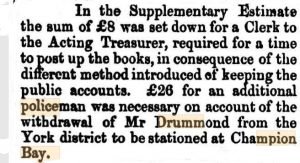 Another addition to the Champion Bay area occurred in November 1850 when John Nicol Drummond was appointed Senior Native Constable. The Monthly Returns show that from June 1852, the 99th may have provided troops to assist in policing. Mr J James, the Geraldine Mine Captain, mentions Drummond’s difficult role in his Report to Directors in December 1850, published in the Perth Gazette of 27th December 1850.

Furthermore, there are six 99th men at the military post who may have been on detachment at the early Champion Bay (Geraldton) lock-up as these names appear in David Barker’s Dictionary: James Fraser, Daniel Harrington, Alexander McGregor, Charles McLoughlin, Lawrence Schofield and Job Yardley.

The Beginning of the End

By 1853 the arrival of the convict ships was beginning to have a positive impact on the labour situation in the Colony. Captain Henry Ayshford Sanford, previously of Toodyay, purchased land at Port Gregory – adjacent to the area planned for a convict depot. The new town would be called Lynton after the Sanford family home in England. In May the ship Leander left Fremantle for Port Gregory with a sergeant and five enrolled pensioners, two sappers and miners and 30 ticket-of- leave men to provide the supervision and labour required for the depot. Charles Gregory (a brother of Augustus) newly appointed Senior Asssistant Superintendent in charge of the convict party at the depot, and Captain Sanford with more workers were also on board Leander bound for Lynton.

On 23rd April 1853 Commandant Irwin signed General Order No. 2 stating that when the enrolled pensioners arrived in Champion Bay on the ship William Pope, it would return to HQ with the last of the 99th troops at the military post. The Musters and Pay Lists give a reliable accounting of the names of the last men in Champion Bay in April 1853. They were Sergeant John McGuire (who later took his Army discharge in the Colony), and Privates Thomas Coughlan, John Faulkner, William Masters, Peter Waddle and Job Yardley.

The convict depot at Lynton and the growing town of Geraldton would provide enough men about the place to take care of protection and labour for a few years to come in the Champion Bay region.