For many thousands of years before the arrival of European settlers in 1837, Noongar Aboriginal people were the traditional custodians of the land that is now referred to as Kojonup. They drank from the local freshwater spring and hunted game with the traditional Noongar ‘kodj’, or stone axe. Both Kojonup and The Kodja Place are named after the historically significant implement. Following the arrival of settlers in 1837, Kojonup became an English Military outpost and, over the next century, evolved into a contemporary farming community. [Kojonup Visitors Centre website] 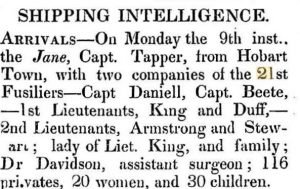 Arrival of the 21st Regiment at the Swan River Colony 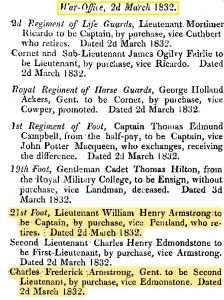 One of the most influential men of this detachment in respect to the formation of the military post at Kojonup was 2nd Lieutenant Charles Frederick Armstrong. Armstrong had been appointed 2nd Lieutenant in the 21st Regiment on 2 Mar 1832 – the same day as his brother was appointed Captain in the 21st (William Henry Armstrong arrived in the Colony in 1835 on Sir John Rae Reid). In October that same year at Deptford, London, C F Armstrong boarded Andromeda, a convict ship bound for NSW. The ship sailed from Portsmouth 17 Nov 1832 and Armstrong disembarked at Hobart, VDL on 11 Mar 1833 where his his regiment was based. Only a few months later he embarked on Jane for the Swan River Colony; his first posting was at the new HQ building in Perth which was completed in 1830 (on Barrack Street, of course).

In October 1834 ten men of the 21st Regiment were involved in what the newspaper termed ‘Encounter with the Natives in the Pinjarra District, on the Banks of the Murray’. There would be no military post at Pinjarra because of the disturbances – that was a political decision – but Governor Stirling decided to maintain an armed force at the Murray under the command of Lieutenant Armstrong. Thus from January 1835 the Monthly Returns show one officer and 15 other ranks for the Murray Military Post. According to the Musters and Pay Lists Armstrong was at the Murray until the end of September, followed by ‘on detachment’ until the end of that year. He returned to HQ in Perth and was there from January to March 1836. In July 1836 Armstrong was promoted by the War Office to full Lieutenant, but it took some time for the confirmation to filter back to the Colony where the promotion does not feature on the local Pay List until January 1837.

The Road from Perth to King George’s Sound

It had become a matter of urgency that a road from Albany (KGS) to Perth be continued from the start made by the 63rd Regiment in the early 1830’s. Another military outpost was required to see this work through at a spot about halfway between Albany and the Williams River at Warriup. Assistant Surveyor Alfred Hillman had already surveyed along this route and was familiar with Armstrong from their time in the Murray River region. Together they continued their exploration to Warriup about 75 miles from King George’s Sound from about October 1836. Armstrong’s record in the Pay List for this period records only that he was ‘on detachment’, but clearly not sitting about in HQ Perth. Hillman’s diaries may be more specific on this period. 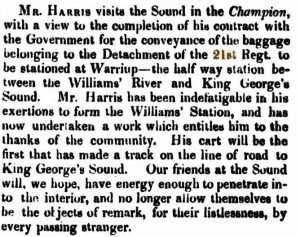 Into the story of how and why the Barracks was located in Kojonup … enter Dr Joseph Harris. Harris had arrived in the Colony with his family on Cygnet in January 1833. He was awarded a government contract to convey the baggage of the 21st Regiment troops who were intending to establish a military post at Warriup on the road from Albany to Perth, the area marked out by Hillman and Armstrong in the previous year. It had the reputation of being a hazardous journey in the dry season. Harris had farms in Upper Swan and Williams and planned to deliver the baggage to the troops, take a look at his Williams farm and then return to the Swan. Alfred Hillman volunteered his services as leader of the party and the government accepted. The contents of Harris’s journal will explain the journey and how and why Kojonup was selected as the site for the outstation instead of Warriup. It is disappointing that the 21st Pay List pages do not indicate the names of the eight soldiers in the party with Lieutenant Armstrong. The trip commenced on 21st February and reached Perth on 11th March and, according to Harris, easier going than expected.

Merle Bignell’s book title of the history of European settlement at Kojonup ‘First the Spring’ was very apt. It is within the Wagyl Kaip and Southern Noongar Region and is associated with the Kaneang cultural group. The reliable freshwater spring at Kojonup was almost certainly used by Aboriginal groups prior to the establishment of the Swan River Colony.

It is of interest that Harris records the moment at which Kojonup was chosen for that military post after encountering a party of friendly Aborigines on 28 Feb 1837: These mutual civilities put them into good humour and gave them confidence in us, and they led us about a couple of miles N.N.W., through a splendid country, to a permanent fresh-water spring … and the water is good. The natives call the place Kojocup. 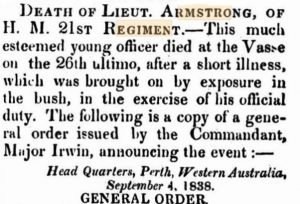 The Musters and Pay Lists show that Lieutenant Armstrong, Corporal James Clibborn and six privates of the 21st Regiment were on station in October 1837 [WO12-3806-194/201]. These rank and file troops may or may not have been among the eight men who accompanied Armstrong on the overland journey mentioned in Harris’s journal earlier in the year. Nor do we know if women and children were present.

The 21st soldiers built their first barracks approximately 90 metres to the south east from nearby trees of the later (surviving) Barracks. Their accommodation was most likely rough hewn timber and one assumes that during this first short period of occupation their rations were supplied either from KGS or Perth. The small group on station did, however, grow their own vegetables. Despite the fertility of the soil and plenty of fresh water that would have been attractive for farming, there appeared to be little interest in the area by settlers. Armstrong and seven troops remained on station until the Lieutenant left in April and the troops in May 1838 [WO17-1234-71]. Lieutenant Armstrong died not long after at the Vasse.

Arrival of the 51st Regiment and a New Barracks is Built 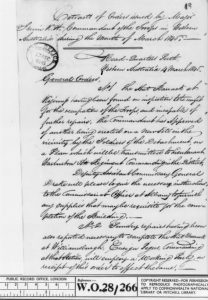 There was no military presence in Kojonup again until the 51st Regiment troops arrived at the Swan River in June 1840 on Runnymede. Within six months, Corporal Robert Chadwick arrived at Kojonup Military Post with six other troops [see table below of all regiments’ first deployment in Kojonup]. The 51st maintained a presence on the station – presumably in the first barracks built by their 21st Redcoat colleagues – of between five and nine men. From July 1842 Sergeant Robert Murphy regularly joined five to six rank and file troops at Kojonup, until in January 1843 the newly promoted Sergeant Joseph Davies took over. From May the number of privates increased to ten with Sergeant Davies in charge until December 1846, albeit occasionally serving in KGS for a month here and there. Davies was to be a settler in the Colony when he took his discharge in March 1847. Click here to read his profile.

It was on Joseph Davies’s watch that Commandant Frederick C Irwin issued a General Order from HQ in Perth, that the state of disrepair of the original barracks at Kojonup required new barracks to be built. The implementation of the plan and supplies of the build would reside in Albany with Lieutenant George G E Warburton and the Commissariat Officer. In the event Sergeant Davies and Warburton would have been well acquainted: they both arrived in Hobart from Britain in 1839 as guards on the convict ship Egyptian.

The location chosen for the new Barracks was on an elevated site overlooking the Perth to Albany Road. The soldiers stationed at the barracks were responsible for constructing the building from local granite blocks. It was roofed with timber shingles and had earthen floors.

Arrival of the 96th and 99th Regiment Detachments in the Colony

The 51st Regiment troops left the Colony in March 1847 and the eight remaining troops at Kojonup Military Post were relieved by eight men of the 96th Regiment. The 96th Regiment’s detachment in the Colony had arrived from Hobart on Java in February 1847 with four officers, five NCOs and 102 other ranks. The 96th served in the Colony for two years maintaining a steady complement of eight men at Kojonop.

In April 1849 the 96th was relieved by the 99th Regiment’s detachment which arrived on Radcliffe with three officers, five NCOs and 99 other ranks. The 99th supplied between six and eight troops at Kojonup until November 1851. Convicts had arrived in the Colony in June 1850 and by the end of the following year the Kojonup settlers were hiring convicts with tickets of leave as labour. The enrolled pensioner force which had acted as guards on the convict ships provided a law and order role in the Kojonup community; the first of these were Corporal James Hamilton a veteran of the 65th Regiment and five privates.

The enrolled pensioners and their families utilised the Barracks building until they built cottages on the land assigned to pensioners on the attached plan showing Barracks and Pensioner Lots, initially leased and then purchased. The Barracks continued to be used by the community as a meeting hall, dance and social centre, church, school, school-teacher’s residence and private residence.

In 1963 the building was purchased by the Kojonup Shire Council and given in trust to the Kojonup Historical Society as a museum.  It is on the State’s Heritage Council list as Place No. 01399. 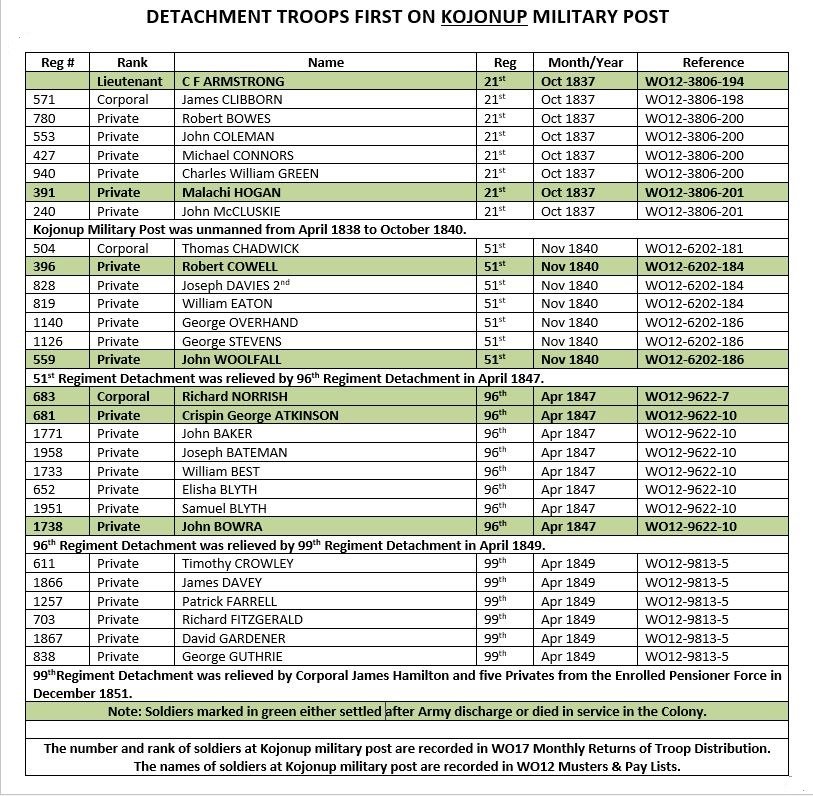 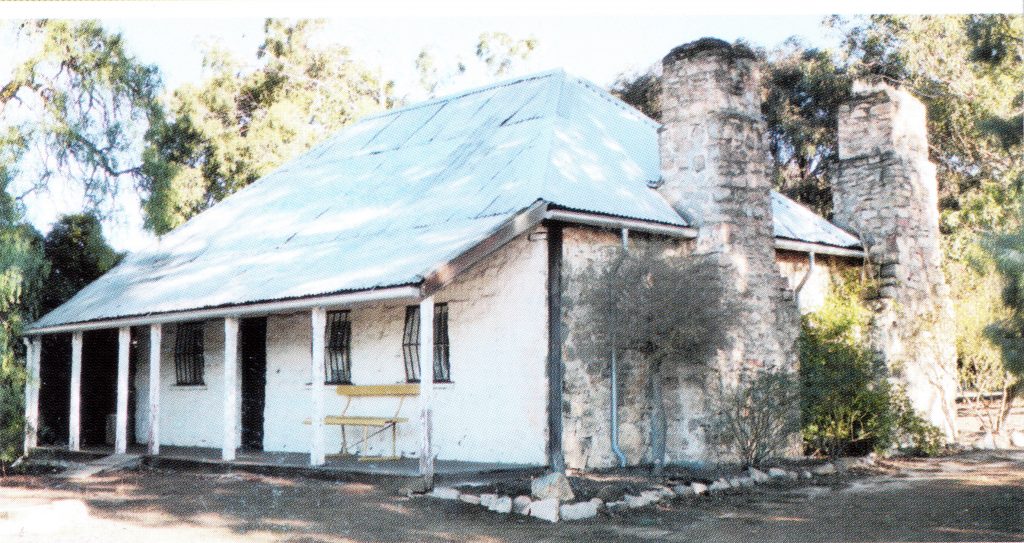