The most difficult thing about this ship is her name. ‘Our’ Asia had her first listing in Lloyds Register in the 1819 Supplement; that year she was one of ten ships with the same name. Jump forward to 1833, the year of her seventh convict voyage, and she was one of eleven in the Register. The year our Asia disappeared out of the records, there were six. It was predictable that I would find a muddle in the various sources. I discovered one resource that attributed three sailings from England in the same year – perhaps she passed herself on the way back!

I am confident I have identified the correct ship for the 1833 voyage from England to New South Wales. There were a total of 17 voyages by convict ships named Asia. The owners, captains and surgeons changed throughout the years the ‘Asias’ plied the oceans. In 1833 Asia brought convict guards from the 21st Regiment to NSW who trans-shipped to Van Diemen’s Land. The Table below shows the voyage to be the seventh of nine convict voyages for this 1818 built ship named Asia. 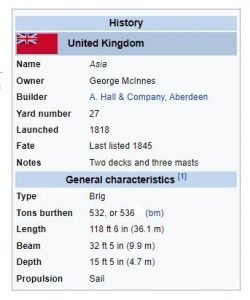 Asia made many long and dangerous voyages throughout her career, including at least two voyages for the East India Company – one of them a 14-month round trip to China and Quebec. She constantly rounded the Cape of Good Hope to deliver and pickup cargo in the far east as a trader and carried 260 government-assisted migrants from Cromarty, northern Scotland via Plymouth to Sydney in 1838 (T B Govey master, Joseph Somes owner).

The ship’s history is shown left [Wikipedia]. Another source [Aberdeen City Council] indicates that the original owner had a partner and also gives additional specifications: two decks, three masts, square rigged, square stern, standing bowsprit, carvel built (planks meeting flush at the seams), wood, sheathed in copper, quarter galleries, and a woman’s figurehead. The ship was registered in Aberdeen at a cost of £7,149.

The brig Asia was built in Aberdeen Shipyard No. 27 by Alexander Hall & Co. Alexander took over the business of Cochar and Gibbon in 1790 after learning his trade and getting business experience. The business was still active in 1957, but in Alexander’s day, it was all about timber and sail. He died in 1849 but the business continued to prosper with his sons James and William at the helm. The Halls were famous for the development of the 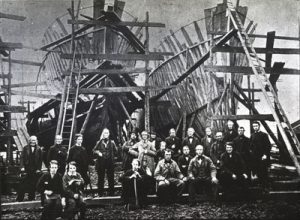 Aberdeen or clipper bow, giving their customers ships with the speed required in the opium and tea trades. The photograph of Alexander Hall’s shipyard  (right) features one of his grandsons.

In an unusual management style for the day, the Hall brothers introduced a dockyard sick and medical fund whereby a contribution each week enabled sick pay and medical attention for its workers; over 100 years before the National Health and Insurance service in Britain was introduced!

Later a large part of the company’s business became the construction of trawlers, coasters, tugs and dredgers, supplying the Admiralty with steam tugs during World War II. James and William Hall had gone into business with Thomas Russell, a Glasgow engineer, and soon merged into Hall, Russell & Co. Ltd. The Yard that had once produced at least one convict ship closed in 1992.

Not too much is currently known about George McInnes (McInnis) except that he and other shareholders contracted Alexander Hall & Co. to build Asia in 1818. Between 1819 and 1845, three different owners appear in Lloyds Registers: George McInnis (1819-1833), Heathorn & Co.(1835-1838) and Joseph Somes (1838-1845). The Lloyds Register seems to have suffered problems with listings in the 1833/34 era and this may be because of the reorganisation of the Register in 1834. As it happens, Somes is credited with this reorganisation.

Between 1814 and 1829 McInnis was shareholder in eight vessels. The convict voyage of 1833 seems to be McInnis’s last documented involvement with Asia. I cannot verify the details of his personal life, but he may have died by April 1832 – a reason for the abrupt end of involvement in his shipping interests. 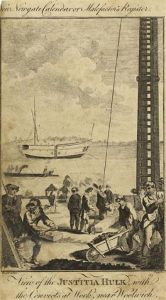 Shipping records indicate that Asia was one of 35 convict ships arriving in NSW and VDL in 1833. More than 230 male convicts were embarked from hulks on the Thames; Cumberland (Chatham),  Euryalus, Justitia and Retribution (Woolwich) were certainly among those that supplied Asia with its passengers. They were mainly sentenced for their crimes in the Quarter Sessions and Assizes Courts across the counties of England and Wales. The exceptions were six who had been court martialled and 25 who were sentenced in the Justiciary Courts of Scotland. Unusually, none came from sentencing at the Central Criminal Court of London (the Old Bailey). The average sentence was nine years, and 73 had been given life sentences. Ten would die on the journey.

If there were such a thing as ‘celebrity’ convicts, two on board would become infamous after their arrival in NSW. Thomas Tattersdale aka Tattersall had been sentenced at Lincoln to 14 years for theft and John Jenkins to seven years theft at Hereford. Both men were hanged in November 1834 for the murder of lawyer Robert Wardell of Petersham, NSW.

The men of the 21st (Royal North British Fuzileers) Regiment who came to Australia in 1833 as convict guards, embarked on 21 different ships to NSW that year. Embarkation returns show that on 24th December 1832, one sergeant and 24 rank and file troops and four women with children left Deptford and on Christmas Day embarked Asia. For the next three weeks they would assist in the boarding of the convicts from the hulks at Woolwich.

Sixteen soldiers and two of their wives were on the ship’s Sick List, but all returned to duty. All the soldiers on this Asia voyage would serve in the Swan River Colony within a few months of arrival in Australia. Among them were Privates Michael Condron and Patrick Larkin (present on the Sick List) who took their discharges in the Colony and would settle there. Master of the Asia was Thomas Fisher Stead and the Surgeon Superintendent Thomas Galloway.

On 9th July troops from several of the ships recently arrived in Sydney left for Hobart on Funchal. A total of three sergeants, three corporals, 80 privates, 16 women and 27 children made up the complement from the 21st and other regiments. Funchal arrived in Hobart on 20th July where all the troops joined the regiment at HQ. In a dramatic turn of events, Stilman White, a convict from the Georgiana‘s voyage of 1828, rescued a soldier with an infant child who fell overboard during the disembarkation of Funchal. The Port Officer recommended White be granted a ticket-of-leave. 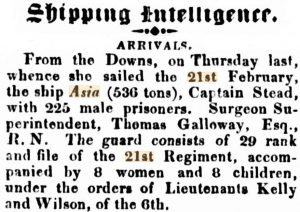 Twenty-five men of the 21st Regiment, some with families, left Deptford on 24th December 1832, arriving the next day at Gravesend where they embarked on Asia. The ship finally left Downs on 21st February 1833 for Sydney. Asia arrived at Port Jackson on 27th June 1833 after a passage of 126 days. As mentioned above, after dropping off the convicts, the men from Asia joined others from the convict ship Portland and trans-shipped on Funchal to Hobart, the final stage of their journey complete. 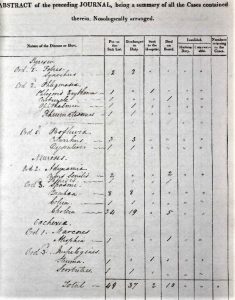 Thomas Galloway R.N. was appointed Royal Navy Surgeon on the 2nd September 1801. He maintained a journal of the Asia‘s voyage from 14th December 1832 to 19th July 1833. He was thus on board the convict ship ten days before the 21st Regiment troops had left Deptford.

The surgeon found the ship’s main prison in an extremely damp state from incessant rain. Only two stoves were supplied from the dockyard. He suggested, in the journal’s general remarks, that no ship over 500 tons sailing from England to NSW at the end of February to the end of July should have less than six stoves and a proportion of coke for their burning as coal caused too much smoke and soot in the damp environment.

Galloway was an experienced sailor-surgeon, having previously served on four convict voyages to NSW and one to VDL, as well as three migrant ships to Australia. Like many before him, he commented on the unsuitability of some convicts to make the voyage – on this journey he mentioned John Edgoose who was 76 years old and was so infirm that he required assistance to get on deck. Edgoose died on the voyage – cause of death, natural decay.

Predictably, scorbutus (scurvy) showed up on the Sick List towards the end of the voyage. From the 16th June to the 29th July 37 cases were reported. Earlier in the voyage the problem was diarrhoea – which turned out to be something else entirely, and is the subject of another story (click here).

Two convicts were admitted to Sydney General Hospital upon arrival – one with phlegmonous erysipelas, the other struma.

Joseph Somes appears in Lloyds Register as the owner of Asia from 1838 until 1845, after which the vessel drops out of the Register permanently. Somes died in June 1845, and the settling of his estate may have had some bearing on the fate of the Asia. She could have been sold and new owners elected not to have her surveyed, or changed her name. Of course, she could have been broken up. 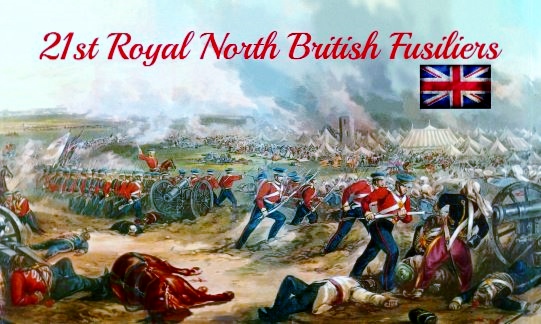