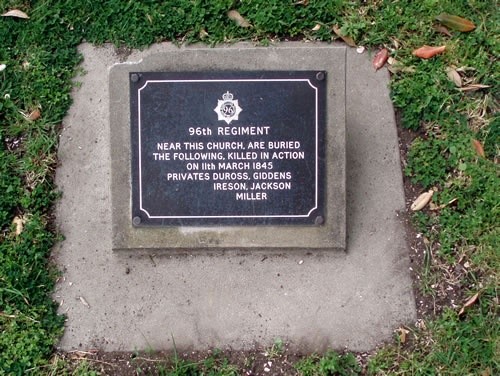 The 96th Regiment sent troops to New Zealand in 1843 and1844. They fought in the New Zealand Wars between 1845 and 1846 under the command of Lieutenant Colonel William Hulme. On 11 March 1845 the 96th Regiment played a significant role in the defence of the Bay of Islands township of Russell, then known as Kororāreka. Some survivors were awarded medals, and the deceased were memorialised by this plaque (left).

The Rolls for the New Zealand Medal awarded the 96th Regiment engaged in the First Maori War should appear on the National Archive War Office classification WO100-18, however the roll for the 96th seems not to have survived.

This fact appears as a note on the Northeast Medals website. It is also noted that the reverse of the medal was undated and that the number awarded was estimated at 27, of which only three medals have survived.

William Spencer’s book Medals: The Researcher’s Guide p.66 mentions the regiments recorded in WO100-18 but does not list 96th Regiment, nor that the roll for this regiment did not survive.

Awarded in 1869 to the survivors who fought in the Maori Wars.  Army and Navy personnel received the award as well as local militia troops.  Both campaigns were the result of Maori resistance to the continuing encroachment of settlers on their lands.
Description: Sterling silver 36mm diameter. The  suspension ornamented with New Zealand fern fronds. Obverse: the veiled head of Queen Victoria. Reverse: Date of service in a wreath, with NEW ZEALAND round the top and VIRTUTIS HONOR (honour of valour) round the foot. This example (left) is the undated medal awarded for the First Maori War.
Clasps or Bars:  None.
Naming:  The medal was almost always impressed in Roman capitals when awarded to Army and Navy personnel, although some awards to local militia are found engraved.
Ribbon:   Blue with central orange stripe.