The Ship’s Owner and/or Builder

Despite Waverley‘s career as a convict ship on four occasions: 1839 (NSW), 1841, 1842 and 1847 (VDL), she does not appear in the Lloyds Register of British and Foreign Shipping until 1845. Perhaps it is because she was classified as one of ‘Her Majesty’s Ships’ of the Royal Navy until that date.

A Waverley appeared in Lloyds from 1839 for some years as a 529 ton vessel built in Chatham in 1833; but there were no ships named Waverley listed in 1842 and 1843.  In Lloyds 1844 list, the 217 ton vessel Waverley built in Sunderland in 1839 turned up, as did the 148 ton Brig built in Pictou in 1844. Our convict ship appeared for the first time in Lloyds 1845 register as the only vessel named Waverley listed that year. She was originally built as a 363 ton Barque in Whitby in 1838, her owner recorded as ‘Chapman’. The Master of all four convict transport voyages was James Morgan, but each voyage was attended by a different Surgeon.

Waverley, the convict ship, was probably built by her owners, Chapman & Co. The ‘Co.’ could have been any of the Chapman family which had been well known in Whitby for more than two centuries as mariners, rope makers, merchants, ship builders, ship owners, bankers and ‘gentlemen’. It could have been Chapman & Campion, a company which had built as many as a dozen sailing ships in the early part of the 19th century in Whitby. The extensive ‘Chapman Family of Whitby Papers’ are presevered in the North Yorkshire County Record Office. 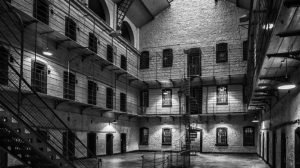 On all four voyages of Waverley she picked up prisoners from Dublin. The 1839 and 1841 voyages each departed with 176 male convicts; the 1842 and 1847 voyages transported female convicts. They had probably all been housed in Kilmainham Gaol awaiting the start of their sentences; the gaol catered for adults of both sexes and children. The women and children would have been housed in the West Wing of the gaol where in 1840 an additional thirty cells had been added to alleviate the overcrowding. Within a few years the consequences of the potato famine would see the conditions worsen considerably. But in 1839, the 176 all-male ‘passengers’ boarded Waverley, survived the relatively fast passage and made landfall. There were no deaths at sea, but four convicts were hospitalised on arrival.

In 1839, eleven ships transporting over 1450 convicts, male and female, left Britain for New South Wales; almost half the voyages received the prisoners in Dublin. Unfortunately the War Office Pay Lists did not always record the names of the ships, but analysis of the army records can identify the relevant ship on which NCOs and other ranks embarked, but not necessarily the officers. The number of ships coming and going became so commonplace, that even the press barely mentioned any detail other than the sailing and arrival dates. There were no 51st Officers on board, but Lieutenants Stirling and Jones from other regiments were on the voyage. Sergeant George Crawford, acting as schoolmaster, and 28 other ranks from the 51st Chatham HQ embarked on Waverley on 14th January, their pay made up to 23rd May 1839. Private Joseph Fermaner was the only soldier on the voyage who later became part of the Swan River Colony detachment, took his army discharge in Perth and settled in the Colony – at least for a time. The Master of the vessel was James Morgan, and the Surgeon Superintendent James Barr, R.N.

Army Musters & Pay Lists record Passage Money paid on 7 Jan 1839 for the 51st Regiment troops who would embark on Waverley.

This was Waverley’s first and only convict voyage to New South Wales; the later three went to Van Diemens Land. 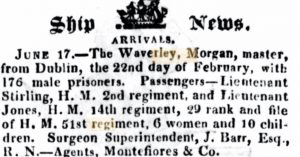 On this occasion Waverley sailed from London at the end of January and arrived in Kingstown, Dublin on 6th February 1839. Fortunately for those on board Waverley, she missed a historic event by a month. Oíche na Gaoithe Móire (the Night of the Big Wind) was reckoned to be the most severe storm to affect Ireland for many centuries. It is estimated that between 250 and 300 people lost their lives in the storm of 6th January 1839. Waverley left Dublin on 22nd February and arrived in Port Jackson, NSW on 17th June (115 days passage). 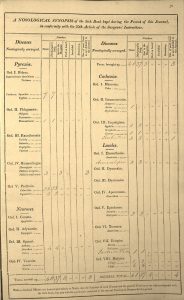 Barr was Surgeon Superintendent on two convict ships: Waverley to NSW in 1839 and Mary Anne to VDL in 1841. After the completion of his second voyage, he returned to Britain via Sydney in May 1841. He died in Scotland in 1867.

Barr maintained a Surgeon’s Journal from 14th January to the 22nd June 1839. His general remarks in the Journal indicate his level of concern for the four men who were hospitalised upon arrival in Sydney, and the cases of scurvy among two soldiers and Catherine Crawford, daughter of the 51st Regiment Sergeant. He also had some practical solutions for keeping the men on board healthy. The Nosological Synopsis (left) indicates that apart from those who came on board in a poor condition and were sent to hospital, all others were treated and discharged from the Sick Bay reasonably quickly.  Here is a summary of Surgeon Barr’s General Remarks about the voyage. 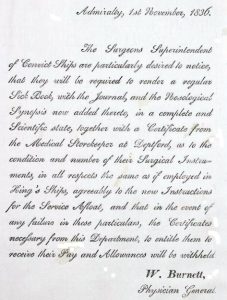