The shipbuilding concern Hilhouse and Company was first established in 1772.  The Bristol shipping business working out of Hotwells Drydock, had an impressive array of naval warships to its name during the latter part of the 18th century, but by the turn of the 19th century, it had moved into building and owning merchantmen. In 1803 the business became Hilhouse & Sons and Company and in 1814 built the first steamboat in Bristol.  George Hilhouse (a son) built Waterloo, launched in July 1815; she was sold to Henry J Moore & Co. three years later. In 1824 the company became George Hilhouse & Company and in the same year Waterloo was sold by Moore to Brocklebank & Co. She continued to be owned by Brocklebank until her demise in August 1842. The Hilhouse family prospered with the addition of a partner, Charles Hill.  Throughout the early 19th century the Hilhouse owners and builders developed a dock area opposite the original Hotwells site. It became Albion Yard and has continued in Bristol until this day, currently as Abels Shipbuilders. 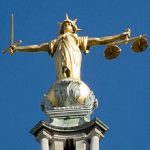 The 224 male convicts who embarked on Waterloo had been sentenced to an average of nine years and included 75 ‘Lifers’.  They had been tried in an assortment of courtrooms in England and Scotland, including 43 who were ‘sent down’ at the Old Bailey (Central Criminal Court in London).  Three men were sentenced in Bermuda and 21 in Canada.

Between August and December 1837, seven ships transporting over 1400 convicts, male and female, left Britain for New South Wales, along with their guards from the 51st Regiment. Unfortunately the War Office did not always record the names of the ships, but analysis of the Pay Lists can identify the relevant ship on which NCOs and other ranks embarked, but not necessarily the officers. The number of ships coming and going became so commonplace, that even the press barely mentioned any detail other than the departure and arrival dates. Nonetheless, Lieutenant W H Hare, Sergeant Thomas Norton, Corporal William Dennett and 19 ORs embarked on Waterloo on 20th September 1837, their pay made up to 27th January 1838. Corporal Dennett was the only soldier on this voyage who later became part of the Swan River Colony detachment, took his Army discharge in Perth and settled in the Colony. The Master of the vessel was John Cow, the Surgeon Superintendent James Ellis, R.N.

On this occasion Waterloo sailed from Sheerness on 4th October 1837 and arrived in Port Jackson, NSW on 8th February 1838 (127 days passage).

James Ellis R.N. made four voyages on convict ships as Surgeon, three to NSW and one to VDL prior to his duty on Waterloo. These were Houghly (1831), Diana (1833), Bengal Merchant (1835) and Westmoreland (1836). Ellis had married his second wife in Sydney in February 1835, thus he made Waterloo his last voyage on a convict ship and settled in Australia. He registered as a surgeon in NSW and served as the Yass Police Surgeon until 1843.  He sold his Yass Town Allotments and returned to England in June 1845.  He died in London in 1863. 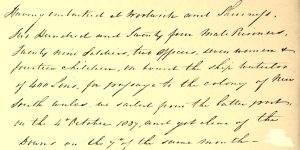 Ellis maintained his Surgeon’s Journal from 10th September 1837 to 21st February 1838.  He notes that 224 male prisoners, 29 soldiers, two officers, seven women and fourteen children embarked at Woolwich and Sheerness.  Although upon arrival the newspapers reported that these were with the 51st Regiment, nine of the soldiers were not recorded anywhere on the 51st Regiment Pay Lists and it is possible that they were men joining detachments of the 50th and 80th regiments, both in NSW at that time.  The 51st were destined for Hobart Town and took up duty there within a few weeks of arrival in Australia. 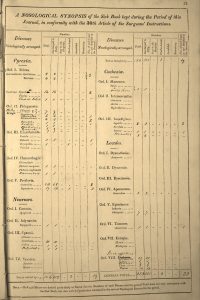 In his Journal Ellis remarked, on 7th October [1837] two cases of measles made their appearance with two children belonging to the guard and soon after putting to sea three more occurred all of which were of a mild type and were easily treated. The prisoners were generally healthy although they looked as if they had been for some time rather scantily fed. The voyage was long and tedious being ten weeks at sea before the ship got into the Cape of Good Hope, which as a result the prisoners as well as the guard were afflicted with dysentery, inflammatory fever and some symptoms of scurvy.

There was an unusually high number of visits to the sick bay with a total of 223 cases from which two soldiers’ children died. Out of the 22 soldiers from the 51st Regiment, 16 reported sick.  Corporal Dennett, our Swan River Colony settler, was one of 12 cases of Psora (an itchy skin condition which can include psoriasis, scabies, or mange). 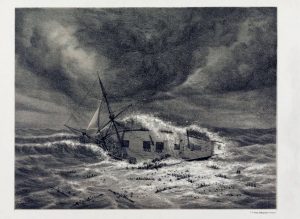 Cape Town, August 31 1842 (excerpt from South African Commercial Advertiser) …
On the forenoon of Sunday last [28th August] two large vessels, the Abercrombie Robinson [no lives lost] and the Waterloo went on shore on the South Eastern beach at the bottom of Table Bay. Both vessels were engaged as Transports by the British Government.

Waterloo, a Ship of 414 tons, bound to Van Diemen’s Land, had on board, besides her crew, two hundred and nineteen male convicts, Dr. Hesell in charge, Lt. Hext, Ensign Leigh, thirty men of HM 99th Regiment, five women and thirteen children. She took the ground between eleven and twelve o’clock in the forenoon and in fifteen or twenty minutes became a mass of rubbish. And now ensued a most piteous massacre. In about two hours and a half, amidst the crumbling heaps of their perfidious prison – of men, women and children, one hundred and ninety four were crushed, disabled and drowned. There was no preparation for saving life made on board or on shore. No life buoys, no coils of ropes lashed to casks, nor any apparatus for establishing a communication with the shore from the Ship.

One hundred and eighty nine people drowned: 143 convicts, 15 men of the 99th Regiment, together with 17 wives and children, the boatswain, the sailmaker, the carpenter, and 11 of the crew. The remaining convicts were taken to Hobart by Cape Packet which arrived on 23rd November.