Tortoise started life as a ship named Sir Edward Hughes. The ship was built by the East India Company in Bombay and launched in 1784, the year Admiral Hughes, Commander in Chief of the Royal Navy’s India Station, retired. Her career with the EIC was as a local trader initially. However from 1788 she made a number of voyages that took her further afield, including China and other parts of India and even Britain. On her final voyage with EIC in 1804, she captured a French Slaver.

In 1805 the ship was acquired by the Royal Navy. She was immediately put to work as a convoy escort until 1807 when she put into Woolwich on reserve.The Navy renamed her Tortoise in 1807 and converted her to a storeship in 1808. After the end of the Napoleonic Wars she became variously a coal depot, a hulk, and then a convict transport.

Tortoise was a large ship for her time and always carried armament. It was said that because she was built with her water storage tanks integral to the ship’s design, thus saving stowage and handling, that ‘the shipwrights did not prioritize sailing speed in their designs’; and maybe this is why she was named Tortoise by the Royal Navy. Nonetheless by the time she sailed as a convict transport, her size, crew and passenger load of convicts, guards, women and children – over 650 souls – did not impede her sailing time.

Four hundred male convicts were embarked on the ship from hulks and gaols in the London ports and Portsmouth. One hundred embarked at Woolwich from the hulk Warrior, a vessel in the Thames only opened for business the year before Tortoise sailed. The prisoners were sentenced to an average of 11 years, with 52 ‘lifers’. The Central Criminal Court (Old Bailey) accounted for 72 of those sentenced; 39 soldiers court martialled by the Army outside Britain in Gibraltar, Malta, Corfu, Bermuda, Jamaica, and stationed in Toronto, Montreal, Quebec, Nova Scotia, Chambley and Drummondville, Canada. The remainder were sentenced at the Assizes and Quarter Sessions in counties all over England.

Of the 400 convicts boarded, 394 were landed in Hobart, VDL. One of them, George Reading, wrote a letter to his brother on the voyage; it was sent to London from the Cape. In the fullness of time I hope to get permission to publish this gem on this website.

From April 1841 to May 1842 sixteen convict ships plied the ocean routes from ports in England and Ireland to Van Diemen’s Land transporting convicts from the hulks and gaols of Britain. Tortoise was but one of them, the only voyage she made to Australian waters as a convict transport.

The 96th Regiment guards for Tortoise’s voyage comprised three officers, five sergeants. four corporals, two drummers and 120 Privates. Sixteen of the soldiers served in Western Australia and five of them were discharged in the Colony and became settlers: Privates Edmund Ashworth, Michael Ford, Nathaniel Newstead, James Rock and William Rummer. During the voyage 35 soldiers were on the sick list with various ailments (see left).

Master of Tortoise was Captain J Hood RN who had at his disposal around 100 crew. The Surgeon Superintendent was Thomas Brownrigg RN, assisted by Henry Jones Domville RN.

Private Richard Trayhorne who was on board Tortoise, did not make his way to Western Australia, and served out his time in Australia in VDL. However, he did make his way to WA in 1850, when once again he was a convict guard … but this time in his retirement! He was an enrolled pensioner guard on Hashemy, one of the the first ships from Britain to bring convicts to the previously ‘free’ Colony.

The 96th Regiment guards embarked on Tortoise at Sheerness or Chatham in mid August 1841; the Musters and Pay Lists are somewhat confusing on this point. But NSW is definitely recorded as the destination. This must have been a clerical error (or perhaps the Army Orders changed) because all other accounts of the voyage indicate the destination to be Van Diemen’s Land.

The first stop on 27th August was Portsmouth where the the ship remained until 11th September. During this time, some of the prisoners were sent to a convict hospital ship in Portsmouth harbour. Tortoise then sailed to Plymouth where she remained until 13th October, attempting in bad weather to start the journey to Australia. Within a few days the weather drove them to return to Plymouth where repairs were made in the Dockyard. Finally on 26th October she set sail for VDL via Cape of Good Hope. Three of the prisoners died during the voyage: John Barber, John Reid and Thomas Finch.

The ship arrived in Hobart on 19th February 1842. While Tortoise was in port, HMS Beagle arrived with Charles Darwin on board. On 21st February a sad incident occurred on board Tortoise when Private #555 Thomas Watson committed suicide. The inquest in Hobart took place the following evening.

After disembarking the convicts and the guards, Tortoise sailed on 9th March to New Zealand to gather Kauri wood for spars for the Navy. Between March and June, the crew of the Tortoise succeeded in gathering 103 masts along New Zealand’s Coromandel Coast. 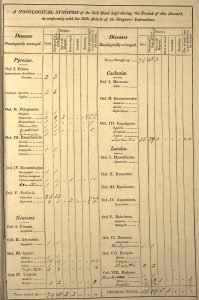 Thomas Brownrigg RN became Assistant Surgeon in the Royal Navy in 1814 and appointed Surgeon in 1824. His Naval career included service in the Baltic, North America, West Indies, East Indies, China, Australia, and the Pacific. For several years he held an appointment as surgeon to the convict establishment at Bermuda. The voyage on Tortoise appears to have been the only convict ship on which Brownrigg served as Surgeon.

The Surgeon maintained his journal from 21st August 1841 to 25th February 1842. He was understandably proud to say that statistically his ship with 651 souls on board had a low mortality rate. The Nosological Synopsis indicates that 115 people were admitted to the Sick Bay, 28 of them with the seaman’s old enemy scorbutus (scurvy). There were 11 cases of pneumonia, including some of the soldiers. Nine children were delivered on the voyage. The three convicts who died had succumbed to dysentery (2) and a case of phthisis (tuberculosis).

In his journal, Brownrigg made a suggestion regarding the defective air pumps on board, the action of which he anticipated would be too much confined to the space immediately near them [prisoners]. His opinion was that a simple and effectual plan of ventilating the prison deck, might be adapted on the principle of the common forcing pump used for water, and by means of sufficiently long and airtight hoses, a strong current of fresh air might be sent under the sleeping berths and into all the remote corners of the deck. 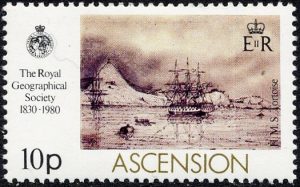 While in New Zealand in 1842, the crew of Tortoise gave some armament support to an expedition by the Army to sort out an intertribal problem between Maori tribes. In 1843 Tortoise returned to Britain to be refitted as a Stores’ Ship for the Ascension Island. She remained on Ascension from 1845 to 1859 and must have been a familiar sight in the area as more than a century later she was recognised with the isssue of a postage stamp to commemorate the Ascension Royal Geographical Society.

In October 1859 the Royal Navy gave the order to break her up. In 1979 the Navy, while searching for the wreck of William Dampier’s Roebuck, discovered a number of other wrecks. It was suggested that Tortoise may have been one of them. Graham Lockett on Wrecksite.eu records ‘All that remains of the wreck are many iron “knees” with 2 – 3 foot long, 1 1/4″ diameter brass keel pins attached. The wreck lies on the edge of the drop-off into deeper water (30m). It is very close to the wreck of the Sudon, both wrecks can be easily covered in the same dive, given the excellent viz.’