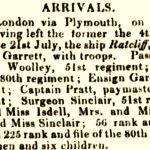 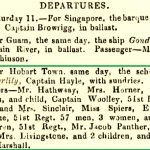 Assistant Surgeon George C Meikleham was attached to the 51st Regiment on the Hydrabad‘s voyage (leaving Gravesend the same day as Ratcliffe), He rejoined the regiment in Hobart on 17th November 1843. He served in VDL for a year and then left for the Swan River Colony on Champion to serve in the 51st Detachment in Perth until the Regiment left for India in March 1847.