Frindsbury, sometimes called Frinsbury, is part of the Medway Towns’ conurbation in Kent, England. It lies on the opposite side of the River Medway to Rochester, and at various times in its history has been considered fully or partially part of the City of Rochester. The towns are about one and a half miles apart. Its location puts Frindsbury on the opposite bank to Chatham Dockyard where, during a period of four hundred years, more than 500 ships were built for the Royal Navy.

I have not discovered who built Prince Regent but one of the well-known Royal Navy shipbuilders may have built this trader/convict ship: Josiah & Thomas Brindley, John Pelham or John King. It is even possible that she was built for the Royal Navy, sold to a private owner and renamed.

The Ship’s Owners and Agents 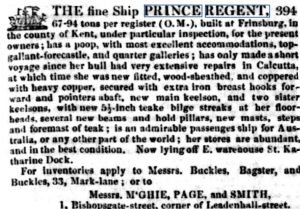 Despite the newspaper advertisement (right) placed on behalf of agents Buckles, Bagster, and Buckles [previously Buchanan], indicating that Prince Regent was “built at Frinsburg [sic] in the county of Kent”, she is listed in Lloyds Register (Licensed & Country Ships) in 1818 as being built in Rochester. She is recorded with Buckles as “husband” [owner’s representative] bound for Bombay on 23rd April 1817. She does not appear in Lloyds prior to 1817. Prince Regent can be found in Lloyds undertaking at least four voyages to Bombay or Bengal in 1818-1823. At first glance it may seem that she was a trader enroute to India for all of these voyages. However, the sailing on 9th July 1820, recording her bound for Bombay, in reality was Prince Regent’s first convict voyage to NSW. She left Deptford with military guards from 1st (Royal Scots) Regiment, picked up convicts in Dublin and arrived in Port Jackson on 9th January 1821. A further point of interest is that the Buckles’ consortium was agent for the ship Rockingham when she arrived in the Swan River Colony in 1830.

Lloyds Register entries for 1841 show that Buckles, Bagster and Buckles were not only her agents but also her owners; however, probably during that year ownership transferred to Joseph Somes. After his father’s death, Joseph and his elder brother took over an already prosperous business which included sail making, a chandler business and chartering for the East India Company. Later, after the EIC broke up its fleet, Joseph acquired a number of its ships. He became sole owner of the company and by the time of his death in 1845, he owned up to forty ships making him one of the largest private shipowners in the world.

Prince Regent, built in Rochester (382 tons), is not to be confused with the convict ship of the same name built in Shields (sometimes recorded as Jarrow) in 1810/11 (527 tons). The Tyneside built Prince Regent was built by Francis Hurry & Co. and made four convict voyages to Australia, arriving in NSW in 1820, 1824, and 1827 and  VDL in 1830. A number of sources has confused these two distinctly different ships.

Fifteen convict ships left England for Van Diemen’s Land in 1841; the tenth one to do so was Prince Regent. However, she did not receive her human cargo until almost a month after the ship left Gravesend. In August 1841, Prince Regent sailed from Kingstown Harbour, Dublin with 181 male convicts on board. She would pick up four military prisoners from the Cape of Good Hope, making a total of 185 for the voyage. Four people died on the journey – two elderly convicts whom the Surgeon Superintendent thought unfit to travel in the first place: they were aged 58 and 64 years and in poor health from the outset. An 18-year-old convict died a week after sailing. A nine-year-old child ‘belonging to one of the convicts’ [the phrase used by the Surgeon] died of hydrocephalus – he was described as a ‘free settler’ on the Sick List. There were two passengers named Thomas Kane, so I assume they were father and son.

The 96th Regiment guards for Prince Regent’s voyage comprised one officer, two sergeants, and 37 rank and file. Fifteen of the soldiers later served in Western Australia and five of them were discharged in the Colony and became settlers: Privates John Boag, James Doyle, John Dreury, William King and Richard Norrish. During the voyage four soldiers were on the sick list with various ailments.

Master of Prince Regent was Captain RN, and the Surgeon Superintendent was Philip Toms RN.

The 96th detachment embarked on Prince Regent at Gravesend, on the River Thames, on 1st July 1841. The detachment was bound for Kingstown, Dublin where 181 convicts boarded. The ship sailed for the Cape on 7th August, arriving at Simons Bay on the eastern side of South Africa’s Cape Peninsula, situated about 25 land miles from Capetown, on 10th November. Water and fresh foodstuffs would have been loaded for the ship’s passengers along with other commodities required in Hobart Town. The ship sailed on 21st November and arrived in Hobart on 3rd January 1842 where the troops disembarked three days later. The ship’s passage from Dublin to Hobart was 149 days. 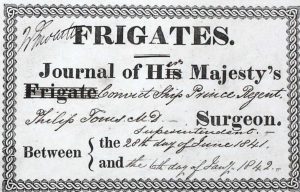 Philip Toms* RN was educated at London hospitals Guy’s and St Thomas’s then joined the Navy as an Assistant Surgeon and promoted to Surgeon in January 1834. He made three voyages on convict ships to Australia in 1840, 1842 and 1847.
* In many resources he is named Jones.

Toms maintained his journal from 28th June 1841 to 6th January 1842. This journal is somewhat ‘leaner’ than most – mainly because his Sick List and Cases were not high and Toms, in his general remarks, indicated that the health of the prisoners when they came on board was generally good. The exceptions were those of advanced years whom, in his opinion, should not have made the voyage. The Nosological Synopsis indicates that only 26 passengers were on the Sick List – including Josiah Barlow aged 22 who suffered the indignity of hernia humoralis [inflammation of the testicles]. Barlow later served in Western Australia. The most common ailment was scurvy which Toms discussed at some length in his journal. Hereunder is a short excerpt [folio 27]:

There is a report (Wrecksite) that the Shields-built ship was wrecked on a voyage from Sydney to Calcutta on 30th December 1827 – but this does not reconcile with her arrival in Van Diemen’s Land as a convict ship in January 1830.

The fate of the Rochester-built ship Prince Regent is not known.