The shipbuilding concern Hilhouse and Company was first established in 1772. The Bristol shipping business, working out of Hotwells Drydock, had an impressive array of naval warships to its name during the latter part of the 18th century. However, by the turn of the 19th century, it had moved into building and owning merchantmen. In 1803 the business became Hilhouse & Sons and Company and in 1814 built the first steamboat in Bristol. The Hilhouse family prospered with the addition of a partner, Charles Hill. Throughout the early 19th century the Hilhouse owners and builders developed a dock area opposite the original Hotwells site. It became Albion Yard and has continued in Bristol until this day, currently as Abels Shipbuilders.

The first owner was the Hilhouse family – James Martin, George and Robert. It then had a rapid turnover of ownership in early 1823, firstly to a Bristol merchant and then immediately back to George Hilhouse (suggesting a deal fell through). Hilhouse was listed as owner in the 1823 Lloyds Register and during the year made two voyages to Jamaica. In September 1823 she was sold to John Anderson and James Wyld of Leith. In March 1824 Portland was re-registered in Leith and I assume this was under the ownership of the Australian Company of Edinburgh and Leith (Anderson, Wyld and others), at which point she became a well known trader to New South Wales. By 1831 ownership was in the hands of her master, William Ascough, for her first convict voyage to NSW, leaving in November that year. She had undergone some repairs in 1826 and 1831 and surveyed in 1831 as a second class vessel with first quality materials. She is again listed with Ascough as master and owner for her second voyage to NSW in 1833 with convicts and their 21st Regiment guards on board.

Shipping records indicate that Portland was one of 35 convict ships arriving in NSW and VDL in 1833. Portland, after sailing from various Thames ports, arrived at the Cove of Cork on 11th January 1833. By this time she had the ship’s surgeon, several civilian passengers and over 30 soldiers, plus some wives and children on board. After six weeks of administrative chores in relation to the prisoners, with 192 men boarded between the 2nd and 9th February, Portland finally sailed for NSW on 21st February. One prisoner (Rudolphus Fahy) had been re-landed and returned to the hulks owing to his case of Phthisis (tuberculosis).

The surgeon observed early in the voyage that the prisoners from Ireland were less healthy, and had a poorer dietary scale and clothing compared to their English counterparts. He remarked, On the prisoners’ first coming on board, I was struck with their general aspect as being much inferior in point of health and vigour to that which the convicts in England usually present on such an occasion. The day was indeed cold and stormy, their clothing generally bad, almost all more or less worn and thin, very inferior in warmth and quality to that given to convicts in England on the day of embarkation for a voyage to New South Wales.

It was clear that the prevailing cholera pandemic was not only on the mind of the surgeon, but many of the prisoners as well. In Ireland around 40% of those who contracted cholera between 1832 and 1833 would die as a consequence and in some areas mortality rates were as high as 76%. The first cholera death on board, Michael Keogh, occurred after a week at sea, the next two, John Freny and Mrs Lynch, a soldier’s wife, died a week later. In all, there were seven cases of cholera and three deaths; a further six deaths from other causes occurred among the convicts, for a total of nine deaths during the 125-day passage. The surgeon and the ship’s captain and crew did well to contain the outbreak of cholera.

The men of the 21st (Royal North British Fuzileers) Regiment who came to Australia in 1833 as convict guards, embarked on 21 different ships to NSW that year. Embarkation returns show that on 28th December 1832, a colour sergeant, a corporal. 27 privates, five women and 11 children left Deptford, and on New Year’s Day 1833 then sailed from Gravesend to Cork, Ireland. The 21st troops would guard 192 convicts that would embark on Portland and finally leave for New South Wales on 21st February.

Twenty-three of the soldiers on this Portland voyage would serve in the Swan River Colony within a few months of arrival in Australia. Among them were Privates James Blyth, John Smith, James Sommerville and John Thompson who took their discharges in the Colony and settled there.

Seven of the soldiers along with three of their wives were on the ship’s Sick List and regrettably Mrs Lynch, wife of Private William Lynch, mentioned above, died of cholera on 4th March. She was 30 years old and possibly had children on board. At left is an extract (about 1/3rd) of the surgeon’s case notes on Mrs Lynch.

On 9th July troops from several of the ships recently arrived in Sydney left for Hobart on Funchal. A total of three sergeants, three corporals, 80 privates, 16 women and 27 children made up the complement from the 21st and other regiments. Funchal arrived in Hobart on 20th July where all the troops joined the regiment at HQ. In a dramatic turn of events, Stilman White, a convict from the Georgiana’s voyage of 1828, rescued a soldier with an infant child who fell overboard during the disembarkation of Funchal. The Port Officer recommended White be granted a ticket-of-leave.

Master and Owner of the Portland was William Ascough and the Surgeon Superintendent Charles Inches MD, RN. 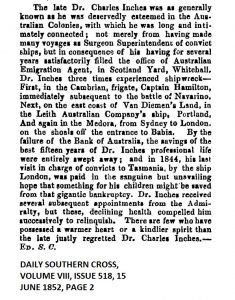 Charles Inches MD, RN was appointed Surgeon by the Royal Navy in December 1821. His brother John was also a Royal Navy Surgeon. Charles Inches maintained a journal of the Portland‘s voyage from 18th December 1832 to 13th July 1833. It was his second voyage out of five voyages on convict ships to Australia. He was also involved in emigrant voyages and the obituary right, gives an accounting of his varied career.

The Surgeon’s journal indicates that there were 98 entries on the Sick List; 30 Case Notes written; nine deaths; five convicts were admitted to Sydney General Hospital upon arrival with febris, pneumonia, phthisis, scrofula (2).

The general remarks in Surgeon Inches’ journal were quite lengthy and were very much taken up with observations about the cholera cases on board, as well as lengthy case notes on those who contracted the disease on the voyage (if not before).

It was not until after the terrible outbreak of cholera in 1854 that Dr John Snow was finally able to convince his own profession and the government of the origins of cholera. His discovery of a pathogen at the Broad Street water pump and his evidence thereafter, was certainly not in existence at the time of the Portland’s voyage of 1833. A second pandemic had reached London in 1832, ultimately causing around 55,000 deaths in Britain. Surgeon Inches knew of the cholera pandemic as his general remarks made abundantly clear, but he would have known nothing of the origins of the disease.

The ship Portland sailed from Sydney for Launceston on 17 September 1833, under the command of Captain D. Coghill, with a valuable cargo consigned mostly to passenger James Cox. While approaching the Tamar Heads on the morning of the 27th, the coastline surrounding Fourteen Mile Bluff was mistaken for Low Head. When this was eventually recognised, an attempt to put about resulted in the vessel missing stays and drifting inshore. The anchors were dropped but they dragged, and the Portland went onto a reef about 100 yards offshore. The Captain was unable to maintain control over his crew and confusion reigned. The ship’s carpenter drowned while trying to swim ashore with fifty sovereigns in his pockets, and Cox’s infant daughter was washed overboard and saved but later died from exposure. The remainder of the crew and sixteen passengers managed to land safely, although all the livestock on board were drowned. The wreck was auctioned by J.C. Underwood at Launceston for £145, but little was salvaged.

Portland continued to be listed in Lloyds Register under the ownership of Captain William Ascough from 1833 to 1836, when she is officially recorded as ‘lost’.