The Ship, Owner and Builder 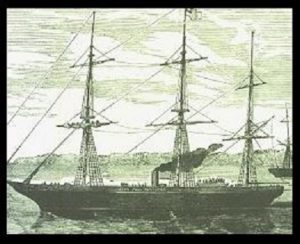 North Briton was built in 1822/23 at Chepstow, Monmouthshire. She was a 402 ton barque, sheathed with copper, ironed standards and proved iron cables with a draft of 17 feet. She first appeared in Lloyds Register Supplement in 1823 showing the Master to be Morrison and her Owner G. Young. But who built her remains a mystery. Grahame E Farr the maritime historian confirms North Briton’s build year, yet he does not record the name of her builder [Farr:181]. Much has been written about the Chepstow shipyards, but in the context of Britain’s National Shipyard, an initiative to expand merchant ship production during the First World War. Little is known about the thriving industry on the River Wye one hundred years prior to Chepstow’s resurrection in 1916.

North Briton spent her first five years sailing variously to North America/Canada and India. In 1828, she began her many journeys to Van Diemen’s Land and New South Wales – continuing to be owned by G. Young. In 1836 Thomas Fyall took over as Master, and with a port registration in Leith and the owner now Young and Company, the ship continued an annual trip to NSW as a trading or emigrant ship until 1842 when she was contracted (for one voyage only) as a convict ship.

The 99th Regiment soldiers and the ship’s surgeon left London in mid-November bound for Kingston, Dublin where they took on board 179 male convicts. Details of the convicts names from Australian sources are scarce. Thus, it is not possible to summarise their place of trial or sentences. Nonetheless, the National Archives, Kew has transcribed online the sick book where many of the names may be found [ADM 101/57/6 pages 1-4]. There were six prisoners’ children on board.

During the trip an unusually high number of convicts, soldiers and crew were noted in the surgeon’s sick book. Michael McDaniel, a convict aged 54, died of phthisis confirmata (consumption or tuberculosis). He was recorded in the sick book on 22 Jan and died on 15 Feb 1843 and had copious case notes in the surgeon’s journal. Three other convicts were sent to the hospital in Hobart upon arrival: John Campbell (26) with diarrhoea; Jeremiah Ennis (30) with sarcoma on the neck; Andrew Dwyer (27) with scrofula.

A detachment comprising Colour Sergeant John McCullough and 28 rank and file from the 99th Regiment left Deptford in November 1842 to form the guard for convicts embarking at Dublin. They were accompanied by Lieutenant E Beatty, the regiment’s Assistant Surgeon G R Smith and Surgeon Superintendent for the voyage James Leathem Clarke, RN.

Of these soldiers, half of them were mentioned in the sick book during the voyage – all were returned to duty. Among them was George Innes who had been promoted during the voyage (10 Dec 1842) from Private to Corporal. Innes was the only soldier from this detachment to take his Army discharge in Western Australia. 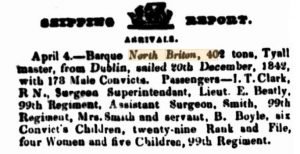 Surgeon Clarke maintained his journal from 10 Nov 1842 to 10 Apr 1843. As can be seen from the Nosological Synopsis above, he attended to a great many patients with a variety of conditions. Scurvy was once again the plague of those at sea (34 cases). Judging by the swift passage of this ship from London to Hobart, it probably did not stop anywhere to take on fresh foodstuffs which may have exacerbated the problem. Clarke in his journal remarks that diet was more beneficial in preventing scurvy than any medicine. A great many passengers also had psoriasis (25 cases). And the twin ‘opposites’ diarrhoea and obstipation presented in 11 cases each.

After the 1842/43 convict voyage, Thomas Fyall took North Briton, under the ownership of Young and Co. from London to Calcutta on three journeys in 1844 to 1846. In 1847 the ship had a change of ownership to Clark and Co., changed its port of registration to Plymouth, and made a voyage with G Dix as master to Quebec. Thereafter, there are no listings in Lloyds Register. Her fate is unknown to me.