When Mellish was built, her description was 423 tons, length 112 ft. 3 ins. (34.2 m), beam 29 ft. 9 ins. (9.1 m), rigged as a three-masted ship. She was surveyed in London prior to her first convict voyage in October 1828 and recorded as a first class vessel with first quality materials with proved iron cables. It was noted in Lloyds Register that in 1827 she had been sheathed with copper, with boards of patent felt, and was at that time 425 tons with an 18 ft. draft when loaded.

Her career included trading between London and India, two convict voyages – New South Wales (1828-9) and Van Diemen’s Land (1830) – and as a Southsea whaler. Arguably her most eventful trip was made in 1840 from London to Melbourne with cargo on board. Captain J Jones made record time to Port Phillip of 92 days, but had a gruelling time of it as reported in the Port Phillip Gazette between 1st and 16th July 1840: the loss overboard of a boy during the passage from England; running aground on a sandbank in the south channel (blamed on the lack of pilots available); and assaulted by one of his seamen who was fined five pounds.

Mellish was built by James Kyd of Kyd Company in Kidderpore, Calcutta, Bengal. Kyd, although born in India (1786), returned to Britain to learn his shipbuilding trade. Back in India he became a master ship builder for the East India Company and built vessels as small as 187 tons (a yacht), to ships of over 1200 tons. 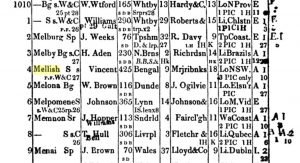 Mellish was purchased in 1819 by Stewart Marjoribanks and renamed. She was subsequently listed in Lloyds Register Supplement for the first time in 1821 at 450 tons on a voyage from London to India. Stewart Marjoribanks started out as a wine merchant with the Paxton family and its East India Company agency. His first purchase was Duke of York in 1817. By 1820 Marjoribanks was the Member of Parliament for Hythe (1820-37 and 1841-47). In 1825, he became a director of the New Zealand Company whose aim was to colonise New Zealand after buying land from the Maori people. He extended his ship ownership and traded under licence for the East India Company. He was the owner of Mellish when she made both her convict voyages to Australia. Marjoribanks sold Mellish in 1839 to G Bishop, thus avoiding the Port Phillip voyage mentioned above. He died in Hertfordshire in August 1863 with assets of over £33,000.

One hundred and seventy male convicts embarked on Mellish on the Thames at the end of October and beginning of November. Two of these did not make the journey – Ralph Richardson aged 13 was sent to the hulk Retribution‘s hospital at Sheerness with dysentery, and James Hawkins who escaped and was later declared drowned (see below).

No convicts died on the voyage and discounting Richardson and Hawkins, 168 convicts were landed in New South Wales in a general state of good health. Of these the average sentence was ten years and there were 64 ‘lifers’. These men had been tried in 110 Assizes and Quarter Sessions counties in England, 27 Justiciary Courts of Scotland and 11 Great Sessions of Wales; another 20 came from Gaol Deliveries in Bristol, Isle of Man, London, Middlesex and Nottingham.

True Love and the Doting Husband!

ESCAPE OF A CONVICT. – A convict named James Hawkins, succeeded in escaping from the Mellish convict ship on the 8th instant. In 1821, Hawkins was transported for life, and arrived at Sydney in December of that year [Prince of Orange]; he escaped in 1824, and arrived in England in the following year. In 1826, he was apprehended, tried, and again sent to New South Wales [Marquis of Huntley], and again escaped. In October 1827, he was again apprehended in London, tried, and convicted, and a third time sentenced to transportation, but contrived to escape from the caravan which was conveying him from Newgate to the hulks. He was retaken in August last, and again sentenced to transportation, and sent on board the Retribution hulk. On the 21st of November, he was embarked in the Mellish upon the voyage to Sydney. The Mellish sailed, and about dusk on the evening of the 8th inst., as the vessel was sailing through the Needles, he slipped his irons, and lowering himself from a port-hole, cut away the hawser of a small boat, and rowed ashore to the Isle of Wight. The boat and himself were soon missed, and an immediate search was made through the Isle of Wight, but he was not found. He ascribed his repeated and daring escapes to a doating [sic] fondness for his wife [Inverness Courier 31 Dec 1828]. Finally, this snippet appeared in the Exeter and Plymouth Gazette 3 Jan 1829.

The men embarking on Mellish (24 Oct 1828) were Captain Pery Baylee, Colour Sergeant John Mason and 28 rank and file. During the voyage only one soldier was recorded on the sick list. Corporal W (sic) Langton (Case No. 3) suffered from dysentery before Mellish left England’s shores; he reported sick on 28th November at Sheerness but was back on duty by 1st December. Sergeant John Mason was the only man from this voyage who went on to serve in Western Australia – initially at King Georges Sound. He took his discharge in the Colony and settled with his wife and children. 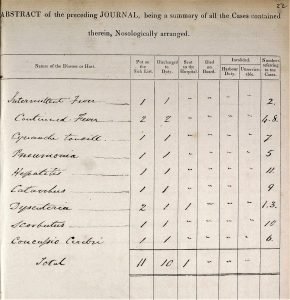 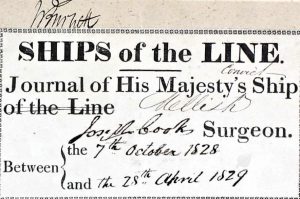 Joseph Cook R.N. was appointed Assistant Survey in the Royal Navy in 1809 and Surgeon in 1814. He was a seasoned Surgeon Superintendent on convict ships, having made six voyages to NSW and one to VDL between 1822 and 1832. He maintained a journal for his voyage on Mellish from 7th October 1828 to 28th April 1829 – an unusually long relationship with his convict charges of almost seven months’ duration. Another feature which sets this voyage apart is that only 11 passengers were reported on the sick list and all had individual case notes recorded. All were returned to duty except the lad sent to the hulk hospital in Sheerness, and there were no deaths. This begs the question: were these passengers unusually healthy on embarking, or was this experienced surgeon on his fifth convict voyage, very competent and caring? To report only one case of scurvy during such a long voyage is also extraordinary. Or maybe Cook’s success is due to this final remark in his journal: In the treatment of the convicts to preserve health, they were daily examined by mustering, made to wash clothes, twice a week, then between decks kept as dry as possible by dry holy-stoning and scraping the deck and airing with the stoves in wet or ? weather – when within the tropics their woollen clothing was taken from them and returned as the ship advanced to the southward and an additional pair of flannel drawers issued. Signed Joseph Cook Surgeon. 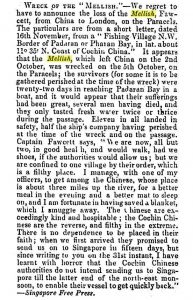 Mellish was wrecked in the Paracel Islands in the South China Sea on 5th October 1844.  She was three days into a voyage from China to London when a storm drove her onto a reef. There were ultimately eleven survivors, including Captain Fawcett. Some crewmen drowned and three men died of starvation after the survivors took to her boat. Her cargo was worth £100,000. 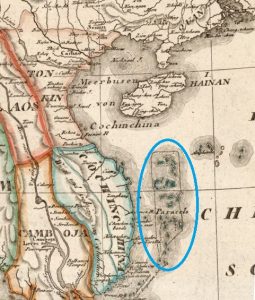