Marquis of Hastings was built in 1819 but by the time of the 1839 convict voyage she was owned by Joseph Somes. Somes (born 1787, Stepney, London) began his maritime career as an apprenticed lighterman to his father Samuel, a ship owner, and at age 21 Joseph was captain of one of his father’s ships. After his father’s death, he and his elder brother took over an already prosperous business which included sailmaking, a chandler business and chartering for the East India Company; later, after the EIC broke up its fleet, Joseph acquired a number of its ships. He became sole owner of the company and by 1830 was the largest ship owner in Britain. By the time of his death in 1845, he was the owner of up to forty ships making him one of the largest private ship owners in the world. In 1844 he became Member of Parliament for Dartmouth. He had been one of the founders of the Lloyds Register of British and Foreign Shipping (1834) and chartered ships to the government for the transport of convicts, troops and cargo to India, Australasia, Africa and The Americas. He left a personal wealth of about £434,000.

Marquis of Hastings was only one of many convict ships purchased by Somes; one of these days I may even try to index them all! Between 1839 and 1846 , Somes’ companies owned about twenty convict ships, all brokered by Lachlans & Co. Somes & Co. also owned the Parmelia, the ship that brought Captain James Stirling to the Swan River Colony.

I have not been able to discover the name of the builder, but ‘Marquis’ was owned in her first decade by either John Lyall or his son George, merchants and ship owners; their company may have built the ship. She appears in Lloyds 1820 Register as built at ‘River’ as a 451 ton two-deck Ship, sheathed with copper with iron standards and knees. She was surveyed as A1 in London, February 1819. Lloyds does not explain the location ‘River’ but the ship is later described as a Barque built in London, so I assume that ‘River’ means a shipyard on the Thames.

On board were 240 male convicts with an average sentence of 13 years and included 74 life sentences. Seven men died at sea and four were sent to hospital upon arrival.

On this website we have already explored the story of 58 French Canadians tried in Lower Canada for their part in ‘Les Patriotes’ insurrection at Napierville, Montreal; they were sent to New South Wales on Buffalo in September 1839. Members of the Patriot Forces, who were captured at the Short Hills incursion in the Niagara Region, were tried and convicted at Niagara on 18th July 1838. After these proceedings ended, 13 were returned to England, sentenced to life transportation to Van Diemen’s Land. Nine of these men embarked on board the Marquis of Hastings from one of the prison Hulks (probably York at Gosport, near Portsmouth) on 14th March 1839. They were among 43 soldiers on board the convict ship bound for VDL as a result of courts martial.

Guarding the convicts on board were Sergeant Stephen Sealey and 28 rank and file of the 51st Regiment of Foot, some with wives and children. These troops embarked on 28th February and were paid until 7th July 1839. Two of the soldiers on board, Privates Michael Hornby and Thomas Prendaville later became part of the Swan River Colony detachment, took their Army discharges in Perth and settled in the Colony; Michael Hornby transferring to the relieving 96th Regiment detachment before doing so. Private Iden Allard also served in the Swan River Colony detachment, but was transported back to Port Arthur, VDL in 1841 to serve a sentence handed down at his court martial.

Newspaper accounts in England and VDL indicate that a Liutenant Frazer and Ensigns Hollingsworth and Jeffery were on board commanding the Guards. However, no Lieutenant or Ensigns of those names are listed on 51st Regiment records, but it is possible, of course, that these officers embarked at Portsmouth and were not recorded on the Chatham Pay List, or perhaps they served with a different regiment. The Master of the vessel was Henry I Naylor, the Surgeon Superintendent Edward Jeffery R.N.

Marquis of Hastings made at least four other voyages before her trip in 1839, on three occasions when owned by George Lyall in 1825, 1827 and 1828 to New South Wales. She made a second voyage to Van Diemens Land in 1842.

On this, her fourth voyage, after embarking 100 prisoners at Woolwich on 4th March, she sailed to Portsmouth on 6th March. At Portsmouth she emarked a further 140 prisoners and set sail on 17th March. After 128 days at sea she arrived in Hobart on 23rd July 1839. 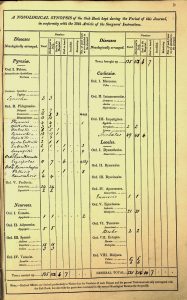 Edward Jeffery R.N. was appointed Assistant Surgeon in the Royal Navy in 1811 and Surgeon in 1825. He maintained Marquis of Hasting’s medical journal from 19th February to 30th July 1839. Jeffery served on two other convict ships to VDL: Recovery 1837 and David Clark 1841. 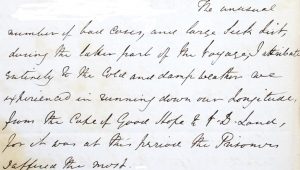 There was an unusually large number of sick cases on this voyage. Jeffery’s case notes naturally concentrated on those who had died during the voyage and those sent to hospital. There were eleven cases of erysipelas of whom four died. Jeffery noted that these deaths were men with broken down constitutions and also exhibited scurvy. The remaining deaths were caused by enteritis, laryngitis and phthisis. The hospitalisations were mainly due to scurvy and pneumonia. Eleven soldiers were on the Sick List and one of them (Private John Sharples) was hospitalised with pneumonia, as were John McNulty and Alexander McLeod, two of the nine ‘Patriots’. Jeffery attributed the bad cases and large sick list to the weather experienced from the Cape of Good Hope to VDL.

In his General Remarks Surgeon Jeffery recorded, A school was established in the prison [ship] and about 40 of the prisoners, who at the time of coming aboard merely knew their letters, can read and write tolerably well on the Ship’s arrival in the Colony. Divine service was performed every Sunday and every means used to promote a religious and moral disposition in the convicts. The greatest attention was paid to their cleanliness.

On 1st April 1855 the vessel was wrecked on the Coloradoes, off the coast of Cuba. She was on a voyage from British Honduras to Queenstown, County Cork while carrying a cargo of mahogany. Her crew were rescued but Marquis of Hastings was a total loss.