Several ships were named after Lord William Bentinck. Two of them were launched in 1828, and the coincidence of name and year of launch, and both having carried convicts to Van Diemens Land, has resulted in some sources confusing the two vessels.  The voyage of convict guards from the 51st Regiment in 1838 was undertaken by the ship built, launched and registered by Hilhouse & Sons in Bristol.

The shipbuilding concern Hilhouse and Company was first established in 1772. The Bristol shipping business working out of Hotwells Drydock, had an impressive array of naval warships to its name during the latter part of the 18th century, but by the the turn of the 19th century, it had moved into building and owning merchantmen. In 1803 the business became Hilhouse & Sons and in 1814 it built the first steamboat in Bristol. While the company Hilhouse & Sons was the builder in 1828, George, one of the ‘sons’, was briefly the official owner of Lord William Bentinck.

George Hilhouse sold the Bristol-built ship to London-based owners (possibly E. Read) during her first voyage to China, while on charter to the East India Company. In February 1830 she was sold to Master Mariner Henry Hutchinson, who for six years sailed her mainly from England to Madras and Bengal. In fact in 1832, Hutchinson left England bound for India in the same month that the other Yarmouth-built Lord William Bentinck arrived in VDL with her cargo of convicts (August)! In 1836 Hutchinson sold his ship to Mangles & Co. of London. Mangles was were the owners at the time of the 1838 voyage to VDL.

The 320 male convicts who embarked on Lord William Bentinck had been sentenced to an average of nine years and included 69 ‘Lifers’. They had been tried in an assortment of county courtrooms in England, and 75 were ‘sent down’ at the Old Bailey (Central Criminal Court in London).

Between April and August 1838, five ships transporting over 1100 convicts, male and female, left Britain for Van Diemens Land, along with their guards from the 51st Regiment. Unfortunately the War Office did not always record the names of the ships, but analysis of the Pay Lists can identify the relevant ship on which NCOs and other ranks embarked, but not necessarily the officers. The number of ships coming and going became so commonplace, that even the press barely mentioned any detail other than the departure and arrival dates. Captain Seth Nuttall Fisher, Colour Sergeant Thomas Newall, and 23 ORs embarked on Lord William Bentinck on 29th March, their pay made up to 5th August 1838. Two soldiers on this voyage – Privates Thomas Longworth and John Williams – later became part of the Swan River Colony detachment, took their Army discharges in Perth and settled in the Colony. The Master of the vessel was William S Stockley, the Surgeon Superintendent John Rankine, R.N.

This was Lord William Bentinck‘s only convict voyage to Australia. She sailed from Portsmouth on 4th April and arrived in Hobart on 26th August 1838 (134 days). 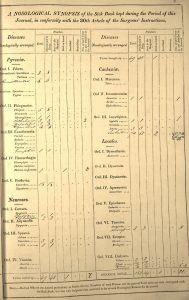 John Rankine was appointed Royal Navy Surgeon 23rd April 1814. He made one other voyage on a convict ship as Surgeon Superintendant on Sarah and Elizabeth, sailing from London on 1st January 1837 to New South Wales.

Rankine maintained his Surgeon’s Journal from 16th March to 3rd September. In it he remarked, on 6th April [1838] received 320 prisoners, all were in apparently good health, although some of them were well advanced in age and two or three were cripples. After crossing the Bay of Biscay the ship encountered heavy weather and the scorbutic symptoms soon appeared in several of the prisoners. In one or two cases diarrhoea and dysentery symptoms were present. The three cases which terminated fatally, the first was a man advanced in years with a broken down constitution and had a severe injury previous to his conviction. The second laboured under considerable mental depression from his embarkation. The third was a young man who suffered from phthisis from his infancy. In all these three cases scorbutic symptoms were more or less present.

Of the 152 passengers recorded on the Sick List, three were Guards: James Dunn with syphilis, William Fox with scorbutus (scurvey); John Williams with hepatitis. The most frequently diagnosed medical condition was scurvey, 70 cases being treated throughout the voyage. Another 15 passengers were recorded with catarrh. Surgeon Rankine wrote detailed case notes on 21 of his charges. Three convicts died on the voyage [see right].

Lord William Bentinck wrecked in 1840. As she was approaching Bombay on 17th June she overshot the port in a gale. She attempted to turn south but wrecked on a reef. She hoisted distress signals but quickly came apart. She had on board passengers, European recruits for the Indian army, and a valuable cargo. Twenty-eight crew, seven passengers and 65 soldiers were lost. A later accounting gave her master’s name as Ord, and reported that she had 150 recruits, 11 passengers, and 39 crew on board.

Worse yet, Lord Castlereagh mistook Lord William Bentinck‘s lights for those of a ship safely at anchor, and steered on to the same reef, also wrecking. Castlereagh had on board 200 people, only 70 of whom were saved. This ‘awful shipwreck off Bombay‘ created quite an amount of newsprint – as such a disaster should have done.