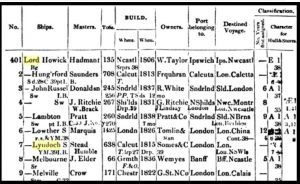 Lord Lyndoch was built in 1814, her first owner Goldie & Co. Joseph Somes purchased the ship sometime prior to her first voyage as a convict ship (1831) and continued to own her throughout all five of her voyages as a convict ship. Somes (born 1787, Stepney, London) began his maritime career as an apprenticed lighter man to his father Samuel, a ship owner, and at age 21 Joseph was captain of one of his father’s ships. After his father’s death, he and his elder brother took over an already prosperous business which included sail making, a chandler business and chartering for the East India Company. Later, after the EIC broke up its fleet, Joseph acquired a number of its ships. He became sole owner of the company and by 1830 was the largest ship owner in Britain. By the time of his death in 1845, he was the owner of up to forty ships making him one of the largest private ship owners in the world. Somes & Co. also owned Parmelia, the ship that brought Captain James Stirling to the Swan River Colony. In 1844, he became Member of Parliament for Dartmouth. He had been one of the founders of the Lloyds Register of British and Foreign Shipping (1834) and chartered ships to the government for the transport of convicts, troops and cargo to India, Australasia, Africa and The Americas. He left a personal wealth of about £434,000. 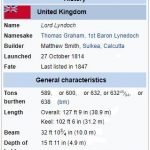 Initially, when I researched a detachment of the 51st Regiment’s voyage on Lord Lyndoch, I was unable to discover the name of the builder, but the ship was among a great many built in Calcutta in 1814 chartered by the East India Company on its trade routes, and later contracted as a convict ship. Builders of that era included: Anthony Blackmore, J Gilmore & Co, J Kyd & Co, Kyd & Richards, Matthew and Michael Smith and S Teague. More recently, when researching the 96th Regiment’s arrival in Australia, I discovered that Matthew Smith was the builder at his Sulkea enterprise in Calcutta. 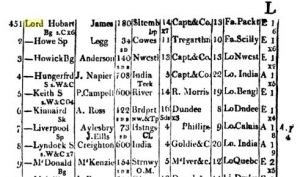 I was not able to find a listing in Lloyd’s Register for Lord Lyndoch until 1818. She was then recorded as Lord Lyndock a ship of 600 tons with two decks, built in India and last surveyed in London in September 1817. At that time she was sheathed with copper over boards (s.w&c); her draft of water when loaded was 20 ft. The condition of her hull was A1. After 25 years of service, on her fifth convict voyage, this time to VDL, her classification was reduced to AE1. Classifications by Lloyds were graded by a lettered scale (A, E, I, O, U), and ships’ fittings (masts, rigging, and other equipment) were graded by number (1 being the best). Thus, the best classification ‘A1’ first appeared in the 1775–76 edition of the Lloyds Register.

The Surgeon on board Lord Lyndoch recorded that 240 prisoners were boarded from Portsmouth on 25th August 1840 and a further 80 at Plymouth a week later, for a total of 320. Other sources differ on this number – but I am quoting the surgeon (see left). These male convicts had an average sentence of 12 years and included 75 with life sentences. The Central Criminal Courts (The Old Bailey) accounted for 72 convicted men; another 33 were soldiers sentenced at courts martial overseas; the balance were sentenced in the Assizes and Quarter Sessions of counties all over England. Six died on the voyage (see the ship’s journal below) thus 314 were landed in Hobart.

During 1841 Lord Lyndoch was one of sixteen convict ships arriving in Van Diemen’s Land from British ports and this was her fifth and last convict voyage. Guarding the convicts on board from the 96th Regiment were Captain C V Butler, Ensign J Purslow, a sergeant and 29 rank and file. Six of these soldiers later made their way to Western Australia and four of them, Privates Crispin George Atkinson, William Brayzley, Andrew Scott and Leonard Teazicker, took their Army discharges and settled in the Colony.

The Master of the vessel was John Humble and Thomas W McDonald was the Surgeon Superintendent on the voyage. 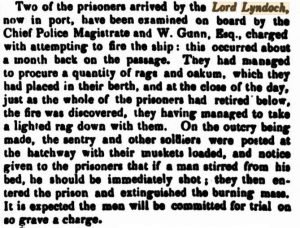 Lord Lyndoch made four other voyages as a convict ship as well as her journey in 1840. In 1831, she transported 266 convicts to VDL; in 1833, 330 (NSW); in 1836, 330 (VDL); and in 1838, 330 (VDL).
The ship sailed from Gravesend on 19th August 1840 and arrived at Portsmouth by 25th August to embark prisoners. She then made for Plymouth, embarking further prisoners on 1st September. She finally left England’s shore on 11th September. She then made for the Cape of Good Hope in order to take on fresh food – mainly to combat the high number of scurvy patients. Lord Lyndoch arrived in Hobart on 5th February 1841.

At some point in the journey two of the prisoners tried to fire the ship. Their plot was discovered and after a voyage of 147 days, Lord Lyndoch arrived at Hobart Town where the prisoners were charged by the Chief Police Magistrate and committed for trial. 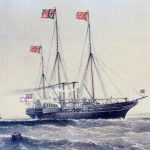 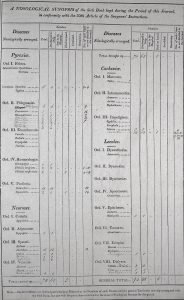 Surgeon Thomas Wallace (Wallis) McDonald made two voyages on convict ships to Australia – Hindostan in 1839 and Lord Lyndoch in 1840. He was accompanied on these voyages to Van Diemen’s Land by convict guards of the 51st and 96th Regiments of Foot respectively. For more than 30 years McDonald made steady promotions in the Royal Navy including the appointment as Surgeon on the Royal Yacht Victoria and Albert, Deputy Inspector General of Hospitals and Fleets and Chief of Royal Hospital Yarmouth.  McDonald maintained a medical journal of the voyage from 25th August 1840 to 11th February 1841.

The Nosological Synopsis (left) in the journal shows that there were 94 attendances at the Sick Bay. We do not know how many prisoners made their way to the Sick Bay on Surgeon McDonald’s only other convict voyage on Hindostan – his unwilling passengers on that journey were female prisoners and no journal has been archived. He made the point in comments about embarkation that 14 cases of scurvy were presented early in the voyage – one of the reasons for stopping at the Cape.

An analysis of cases indicates that five soldiers reported sick from various ailments: palpitations, catarrh, jaundice, bronchitis and a contusion. The six deaths of prisoners were from phthisis (TB), febris (fever), scurvy, pneumonia and dysentery, sometimes a combination of more than one condition.

In January 1844, Lord Lyndoch, with Master John Humble in charge and still owned by Joseph Somes & Co, was sailing from Singapore to Madras when a fire broke out in the Spirits Room and burnt for three to four hours. No details of loss of life can be found. Oddly, she is recorded in Lloyds Register of Shipping from 1845 to 1847, but some details in these listings are missing. Lord Lyndoch does not appear again in the Register after 1847. 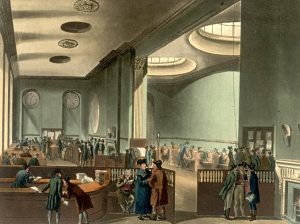