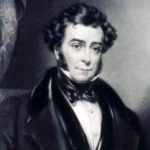 Lord Lyndoch was built in 1814, her first owner Goldie & Co. Joseph Somes purchased the ship sometime prior to her first voyage as a convict ship (1831) and continued to own her throughout all five of her voyages as a convict transport. Somes (born 1787, Stepney, London) began his maritime career as an apprenticed lighterman to his father Samuel, a ship owner, and at age 21 Joseph was captain of one of his father’s ships. After his father’s death, he and his elder brother took over an already prosperous business which included sailmaking, a chandler business and chartering for the East India Company; later, after the EIC broke up its fleet, Joseph acquired a number of its ships. He became sole owner of the company and by 1830 was the largest ship owner in Britain. By the time of his death in 1845, he was the owner of up to forty ships making him one of the largest private ship owners in the world. Somes & Co. also owned the Parmelia, the ship that brought Captain James Stirling to the Swan River Colony. In 1844 he became Member of Parliament for Dartmouth. He had been one of the founders of the Lloyds Register of British and Foreign Shipping (1834) and chartered ships to the government for the transport of convicts, troops and cargo to India, Australasia, Africa and The Americas. He left a personal wealth of about £434,000.

Initially, I was unable to discover the name of Lord Lyndoch’s builder, but the ship was among a great many built in Calcutta in 1814 chartered by the East India Company on its trade routes, and later contracted as a convict ship. Builders of that era included: Anthony Blackmore, J Gilmore & Co, J Kyd & Co, Kyd & Richards, Matthew and Michael Smith and S Teague. More recently I have discovered that Matthew Smith was the builder at his Sulkea enterprise in Calcutta.

I was not able to find a listing in Lloyd’s Register for Lord Lyndoch until 1818. She was then recorded as Lord Lyndock a ship of 600 tons with two decks, built in India and last surveyed in London in September 1817. At that time she was sheathed with copper over boards (s.w&c); her draft of water when loaded was 20 ft. The condition of her hull was A1. On the 1818 voyage to India, her Master was Creighton and her owner Goldie & Co. After 20 years of service, her fourth convict voyage, this time to NSW, her classification was reduced to AE1. Classifications by Lloyds were graded by a lettered scale (A, E, I, O, U), and ships’ fittings (masts, rigging, and other equipment) were graded by number (1 being the best). Thus the best classification ‘A1’ first appeared in the 1775–76 edition of the Lloyds Register.

On board Lord Lyndoch in 1838 were 330 male convicts with an average sentence of 10 years and included 49 with life sentences. The men were sentenced in the Assizes and Quarter Sessions of counties all over England as well as courts in Scotland. The Old Bailey Central Criminal Court had its fair share too. Thirteen had come from further afield: Lower Canada and Trinidad.

Nineteen men died at sea and 112 were sent to hospital upon arrival. These were horrendous and unusual statistics and will be mentioned in more detail below under the heading of the surgeon’s journal. 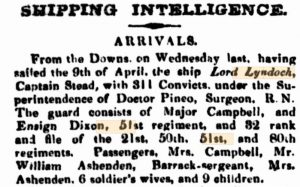 Guarding the convicts on board from the 51st Regiment were Brevet Major James Campbell and Ensign Dickson, two NCOs and and 44 rank and file. Other soldiers from 21st, 50th and 80th Regiments made up the military presence on board. The 48 troops from the 51st embarked at Deptford on 24th March and were paid until 31st July 1838. Three of the soldiers on board, Privates Samuel Mottram, Thomas Swift and Henry Woods later became part of the Swan River Colony detachment, took their Army discharges in Perth and settled in the Colony; Henry Woods transferring to the relieving 96th Regiment detachment before doing so. Swift died a few months after his provisional discharge from the Army, but before he could collect the pension awarded him. The Master of the vessel was William Stead, the Surgeon Superintendent Obediah Pineo, R.N.

Details of her departure are sketchy. The ship sailed on 4th April 1838 and arrived in Deal, Kent on 6th April. After leaving England’s shores, the ship sailed the direct route without putting in at the Cape of Good Hope; something the surgeon later regretted. The ship arrived at Port Jackson on 8th August 1838 (126 days passage).

Obediah Pineo R.N. was appointed Surgeon in the Royal Navy in 1805. In 1806 he was the Surgeon on board Porpoise, the ship which brought Governor William Bligh to Australia. Pineo maintained the Lord Lyndoch‘s medical journal from 14th March to 6th September 1838. Pineo served on two other convict ships to NSW: England 1835 and Pyramus 1836. In 1844 he and his family immigrated to Australia, arriving in Hobart on Marion. He worked in Launceston and Deloraine before returning to England in 1847. 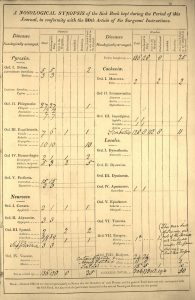 An immediate impression of the 1838 voyage was that Lord Lyndoch‘s tonnage at 638 tons was in the top of the range for its time, and so too were the number of convicts on board. Surgeon Pineo treated 304 men who were on the Sick List and wrote up a staggering 58 sets of case notes. Nineteen men died – prisoners only, no crew nor guards.

An outbreak of smallpox occurred almost as soon as the ship sailed; seven men were treated and one died. Those on board who reported that they had never had the disease were vaccinated – eight prisoners and two children of guards. Another early death was that of a convict with Phthisis; a second case died later in the voyage. An accident occured on 20th May when 16 men were scalded by boiling tea; one of them died. But the most disastrous condition on board – which got completely out of control after passing the Cape – was scurvy. Pineo’s Nosological Synopsis records 128 cases, of whom eleven were admitted to hospital and eight died. These statistics are in stark contrast to Pineo’s previous experience on prison ships where he had no cases of scurvy on one voyage and no deaths of prisoners of any cause on either voyage.

Of course there had to be an enquiry into the number of deaths, as well as the high number of hospitalisations. In a letter written to the Physician General to the Admiralty, Pineo defended his decision to support the ship’s Master and crew in by-passing the Cape. Pineo, in his Journal, wrote that scurvy had appeared in a very aggravated form among the male convicts on the Lord Lyndoch after the ship had rounded the southern tip of Africa. He described how scurvy had concealed itself behind the convicts’ appearance of wellbeing. Even when the disease was most general, you could not perceive any symptoms of ill health. Pineo went on to say, he had gone two preceding voyages without calling anywhere & without the loss of a person, of any discomfiture whatever. I had hoped to have been equally fortunate in this, but in that I was deceived. It has been a source of much regret ever since.

The voyage on Lord Lyndoch probably damaged Pineo’s thirty-five year career as a Royal Navy Surgeon and he was never assigned the role on a convict ship again; but perhaps that was his choice. He did, however, accompany the immigrant ship Brothers from Liverpool to Sydney as Surgeon in 1840/41.

Meanwhile, just as Surgeon Pineo probably felt overwhelmed by his duties, so did a number of the crew on board this large ship. Lord Lyndoch was due to sail during the week beginning 16th September for Java, on her way back to England. The ship was detained by a number of the crew refusing to weigh anchor. They were subsequently charged and faced the Bench on 18th September 1838.  Click here for the story in the Sydney Gazette.

In January 1844, Lord Lyndoch, with Master John Humble in charge and still owned by Joseph Somes & Co, was sailing from Singapore to Madras when a fire broke out in the Spirits Room and burnt for three to four hours. No details of loss of life can be found. Oddly, she is recorded in Lloyds Register of Shipping from 1845 to 1847 but some of the details in these listings are missing. Lord Lyndoch does not appear again in the Register after 1847.