John Renwick was launched in September 1826 and first listed in Lloyds Supplement in that year, registered in Newcastle upon Tyne, until September 1836 when her registration was changed to London. Her maiden voyage was from London to Jamaica with Master H Turner. She was a wooden, single deck, three-masted fully rigged ship of 406 tons with dimensions of 110.7 ft. length and 28.7 ft. breadth with a 17 ft. draft when fully loaded. Other enhancements were copper sheathing [s.C], iron standards and knees [ISK] and proven iron cables [PIC]. She would later be described as a barque. Throughout her career from 1826 to 1848, she was mainly a trader – from London to Jamaica and to Australia – but her last three voyages were from Bristol and Liverpool to South American ports on the east and west coasts. She made two emigrant voyages: In 1836/37 taking emigrants from London to South Australia under charter with the South Australian Company, and in 1841 she took bounty emigrants from Plymouth to New South Wales. Her two convict voyages were in 1838 to New South Wales and 1842/43 to Van Diemen’s Land.

The ship was built by William Smith & Co. at its St Peter’s Yard, Newcastle (right). In 1810 the yard was acquired by Alderman and Mayor Thomas Smith, proprietor of St. Lawrence Ropery, Newcastle. He and his sons William and Thomas traded as a family business. On the Alderman’s death in 1836, the name changed to T & W Smith. From 1811 to 1861 the companies built over fifty vessels – more than one of them would be utilised as transport for convicts, e.g. Circassion built 1822 and Robert Small built 1835. The Smith family also had another shipyard in North Shields, where it built iron vessels.

There were few sole proprietors in the 19th century shipping business. Money was to be made – especially from government charters for convict and emigrant voyages – but just as much could be lost. Shipping was all about sharing the profits and losses by way of investors. Shipping ‘owners’ recorded in Lloyds Registers were usually the major shareholders with a great many minor investors behind them. The investors were often Masters of the ships they partly owned as we will see in the case of the ship John Renwick. It would be impossible for me to explore the financial affairs of these shipping companies, thus I have used the names of owners appearing in Lloyds Registers as my guide.

I first found the partnership of Henry Morgan Godwin and Charles Lee in connection with the acquisition in May 1836 of 32 shares in the ship Spartan sold by Joseph Somes. The ship was built in Chepstow in 1825. Spartan remained in the ownership of Godwin and Lee until 1843 [Farr:119]. You could say my last acquaintance with Godwin and Lee was this bankruptcy notice of July 1843. Is it possible that Captain John Byron, an investor and Master of John Renwick, may have been partly responsible for the partnership’s financial problems?

John Renwick finally sailed from Spithead with 160 prisoners on board – 80 from Sheerness and 80 from Portsmouth. These men and boys were sentenced in the Assizes and Quarter Session courts of England and the Isle of Man, the Justiciary courts of Scotland, and 26 of them in the Central Criminal Court at the Old Bailey in London. The average sentence was ten years, with 15 ‘lifers’.

One boy convict – Thomas Webster – was sent, before sailing, to the hospital on the prison hulk York. At only 16 years of age, he had been diagnosed with Phthisis (Tuberculosis). One prisoner was added to the voyage at Cape Town: John Agnew had been charged with mutiny at sea on the ship Somersetshire and had been sentenced to life. 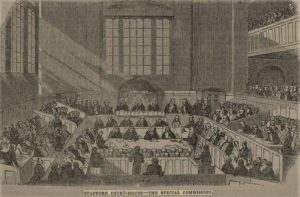 Many of the prisoners on John Renwick had been engaged in the Staffordshire Pottery Riots of 1842. That summer was a period of widespread colliery strikes across the north and midlands, including north Staffordshire. The strikes had affected the pottery factories, which were dependent on coal to fire their wares, and many pottery workers had their hours of work reduced, leading to great hardship. The pottery riots led to a Special Commission in October 1842.

In 1843, John Renwick was one of eighteen convict ships arriving in Van Diemen’s Land from British ports – it was her second convict voyage to Australia. The troops were ultimately bound for New South Wales where the majority of 99th Regiment troops in Australia were then garrisoned. Guarding the convicts to Hobart were Captain E M O’Connell, two sergeants, a drummer, and 27 rank and file troops, four women and two children. They would join other 99th troops in Hobart to board North Briton and arrive at Port Jackson, NSW on 21st April 1843.

More than half the soldiers on board John Renwick were recorded on the surgeon’s sick list and four of these were sufficiently serious to have case notes recorded, but all were soon returned to duty. Private #1643 James Fattis [sic], was treated by the surgeon for catarrh which developed early in the voyage in the English Channel. He was treated between 16th November and 2nd December. This soldier was the only one on board who discharged from the Army (in June 1852) and settled in Western Australia.

The Master for this voyage was Captain William Morgan and the Surgeon Superintendent Thomas Edward Ring. 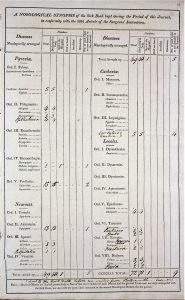 Thomas E Ring RN was appointed Naval Surgeon on 20th July 1820. After serving on John Renwick, he returned to England in June 1843 and the following year was surgeon on Angelina, his only other convict voyage, again to VDL. He maintained his journal from 4th November 1842 to 15th April 1843. The journal entries were very specific about the dates and numbers of those embarking, giving us a good reckoning of all passengers. One of them, James Ebenezer Bicheno, was the new Colonial Secretary of NSW and it seems he was supportive of Ring’s capabilities on board. In a letter Bicheno wrote to Ring in May 1843, he said, I am directed by the Lieutenant Governor to acknowledge the receipt of your letter of the 10th ultimo, reporting the measures adopted by you for securing proper discipline amongst the Convicts on board the “John Renwick” during the recent voyage of that vessel to this Colony, and to inform you that the perusal of your Report has afforded His Excellency much gratification. It is in fact a new course of proceeding, which His Excellency is desrious of seeing adopted by the Surgeons Superintendent in future … .

There were no deaths during the passage (124 days) and Ring reported that there was a high ratio of health enjoyed by those on board, taking into consideration the number of people (of all ages), their limited accommodation and the extensive range of temperature to which they were of necessity subjected, as well as their diet, diversity of employment and previous habits of life. The greatest number of cases was for indigestion (13) and catarrh (15) with scurvy (5).

After setting out from Liverpool via Ascension to Valparaiso, it was reported on 29th August 1848 that the barque John Renwick from Ascension was wrecked on 5th July on a reef lat. 36 deg. 59 min. 30 sec. S., long. 73 deg. 45 min. 30 sec. W. situated W.S.W. 3/4 W. of a small island called Farallon, lying N.W. of Santa Maria Island, at the south extremity of Aranco Bay, and at about 46 miles from the port of Talcahuano. The crew were saved.

Acknowledgement
Thank you, Dave Waller for encouraging me to use the Shipping and Ship Building Research Trust website as the one-stop shop for researching ships built Clyde-side, Tees-side, Tyne-side, and Wear-side and more. I have been using these as individual websites for some years now, without realising I only need the one address! It will certainly free-up some space on my desktop wallpaper.