Everything about this ship was a mystery – at least initially. Ultimately I discovered that the ship had been built in Sunderland. I headed immediately to The Sunderland Site. Its researcher/writer Peter Searle and I have been in contact since I first started researching convict ships some years ago. But much to my consternation, Java was not listed; this surprised me because I had come to rely on Peter’s expertise about Sunderland-built ships. An enquiry very swiftly brought this response from him …the task is truly endless. 10,214 Sunderland built vessels are now site listed. Of I think about 12,700, I have two build lists which I’ll check. But I do not have any other data sources re 1833 and following years other than Lloyd’s Register, until 1848/9. It looks like you have found vessel #10,215. I then crossed my fingers. Peter has now posted on his website exhaustive information about this ship and I see no reason to rephrase his description of it. Thank you, Peter Searle for what follows: 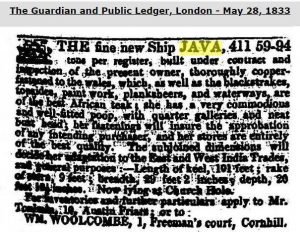 The webmaster has two Sunderland build lists available to him – Java appears in one of them but not in the other, compiled, I believe, from the registry records at Sunderland. It seems likely that the vessel was first registered at a port other than Sunderland. Maybe London? I say that, having found a newspaper report that offered for sale at London, on May 28, 1833 (left), what is stated to be a new ship named Java, of a little over 411 tons. Was the vessel offered for sale ‘our’ Java? The words do not permit proper identification, but it does seem, to the webmaster at least, to have likely been ‘our’ Java. The purchaser of the vessel, in or about May 1833, may well have been H. Mitcalf of Newcastle as LR indicates, or another today unknown, Newcastle owner.

So far as the webmaster can see, the vessel made a great many voyages to the Indian Ocean (to India and Ceylon, now Sri Lanka, and to Mauritius) in the years thru to Nov. 1838 – always with ‘Todd’ in command – but just one voyage to Australia. Java arrived at Cork, Ireland, ex London, on Jul. 13, 1833, under the command of John Todd. And left Cork on Jul. 24 or 25, 1833 for Sydney, New South Wales, Australia, arriving there on Nov. 18, 1833. With 202 male prisoners, under the care of Surgeon-Superintendent Robert Dixon (per Diane Oldman correctly ‘Dickson’), and under guard by 29 rank and file members of the 4th, 7th and 21st regiments under the command of Lieut. Wrixon. 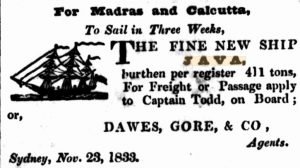 The vessel did not stay long at Sydney. On Dec. 25, 1833, she left Sydney in ballast for Calcutta (now Kolkata), India, arriving there on Mar. 13, 1834. Java’s return voyage to London was not completed until May 9, 1835, the vessel having made, in the interval, a number of voyages from Calcutta to Mauritius and back, likely returning with sugar. From 1835 thru 1838, the vessel made three voyages from London to either Bombay (now Mumbai), India, or to Mauritius, leaving London on Aug. 4, 1835, Sep. 29, 1836 and Jan. 8, 1838. In the last of such voyages, the vessel arrived back at Gravesend, London, on Nov. 5, 1838. The final voyage I have spotted with ‘Todd’ in command. LRs of 1839/40 thru 1843/44 advise that H. Mitcalf, of Newcastle, was the vessel’s owner for service from Newcastle to London thru 1842/43 and from London to Quebec in 1843/44, with R. Young consistently recorded as her captain. The name H. Mitcalf is referred to elsewhere on site and may mean H. Metcalfe of Tynemouth and W. Metcalfe of London.

Now what seemed to happen at Lloyd’s in such times, was that without new data, LR would each year repeat what it had reported in the prior year. Hence, I presume, her reported service of Newcastle to London for 4 years. The first Java voyage that the webmaster has spotted with ‘Young’ in command was not from Newcastle to London but rather from London to Quebec, Canada, in ballast, leaving Deal on Mar. 30, 1840 and arriving at Quebec on May 11, 1840. It returned to Bristol on Jul. 18, 1840. In the following years Java regularly served Quebec ex Bristol. With damage on one voyage in 1841 which necessitated the vessel to put into Plymouth both leaky and damaged. Soon thereafter it continued its voyage and arrived at Hull a little later – on Dec. 25, 1841. On what would seem to have been its final voyage, the vessel arrived at Quebec, ex London, on Sep. 24, 1843. 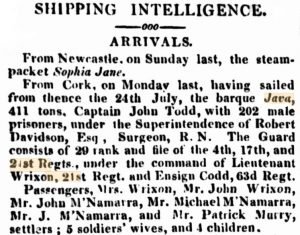 Shipping records indicate that Java was one of 35 convict ships arriving in NSW and VDL in 1833.

Java left Deptford on 24th June 1833 with the ship’s surgeon, a number of soldiers, and some wives and children on board. It is not known whether the civilian passengers embarked at the start of her voyage, or boarded when she reached Cork. On 22nd July 206 convicts – including six military convicts – boarded Java. The ship arrived in Sydney on 18th November 1833 after a passage of 117 days.

The surgeon had doubts about three of the convicts boarded at the Cove of Cork. He recorded, Daniel Sheehan, Patrick Burke and John Sullivan, did not appear in health – Sheehan landed at Sydney – Sullivan the only person (a boy of 13 years) – whom I objected to – after several Physical attacks – rallied, and landed in good health – but of exceedingly delicate habit – Burke Died.

The embarkation of those convicts, was more hurried, than I could have wished, or shall ever again submit to.
Sheehan, it will be seen, was on my List all the passage, and the latter three months, in Hospital.

The Surgeon further commented, It will be remembered, that, cholera, having seized some of the Guard, and Crew; I postponed the embarkation of the Convicts, until the Java should appear free from that dreadful malady.

It is clear that cholera was discovered on board early in the voyage; the first case was Michael Cunningham, a Seaman, put on the Sick List on 2nd July 1833. His was the only death from the disease. Five convicts died on the journey and five were sent to hospital upon arrival in Sydney. None of the convict deaths was related to cholera.

About a dozen of the Java’s prisoners had been charged and sentenced in Kilkenny for being ‘Whiteboys’. Whiteboyism, began in the mid 1700s, and became a general term for members of secret agrarian societies fighting the land enclosures, evictions, high rents, tithes and other perceived injustices against tenants of land in Ireland. Over the years the rural violence carried the penalty of transportation to Australia – possibly as high as 1,000 convicts. Other terms for those engaged in rural activism were Whitefeet, Rockites, Ribbonmen, Levellers, Terry Alts, Lady Clares etc. 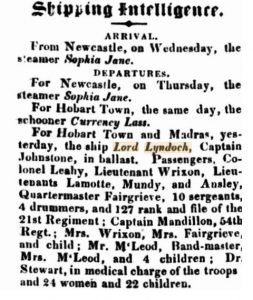 The men of the 21st (Royal North British Fuzileers) Regiment who came to Australia in 1833 as convict guards, embarked on 21 different ships to NSW that year. Embarkation returns show that on 24th June, Lieutenant Wrixon, two sergeants, 21 privates, four women and two children left Deptford, bound for Cork, Ireland. The 21st troops would guard 206 prisoners, six of them military men, that would embark on Java and finally disembark in Sydney, NSW. A further eight soldiers from the 4th and 17th Regiments were also on board Java.

Many of the troops from the 21st Regiment who had arrived in Sydney in recent months, trans-shipped to Lord Lyndoch (another convict transport) on 6th December and arrived in Hobart within the week.

Thirteen of the 21st Regiment soldiers on board Java were on the ship’s Sick List. One of them, Sergeant Phillip Baker, was the only man on board Java who would serve in the Swan River Colony. Sergeant Baker would arrive in the Colony 17 months after the main detachment arrived, but he was among those who discharged from the Army in Perth, married, and settled in the Colony.

Master of Java was Captain John Todd. Robert Dickson RN was the Surgeon Superintendent. The ships passage was 117 days.

Robert Dickson RN was appointed Surgeon with the Royal Navy in 1815. He was employed as Surgeon-Superintendent on the convict ship Java in 1833. He maintained a Medical Journal from 24th June to 3rd December 1833. Dickson returned to England on Royal Admiral in January 1834 with invalids from the 21st Regiment. I can find no other convict voyages on which Robert Dickson was surgeon.

A note on the front of the Journal states: This is a very ill writt

en Journal and by no means creditable in any respect to Mr. Dickson. [Initialled WB].

William Burnett’s (WB) name appears on the front cover of most of the convict ship journals in the mid-19th century. The overview of RN Surgeons’ journals would have been part of his duties as Chief Medical Officer and then Physician General in the Royal Navy. Clearly his comment on the Java’s front cover would relate to this observation in Surgeon Dickson’s journal: Several Naval Surgeons have boasted of their great success in taking out convicts without losing a man; nay they have printed it – I shall not shrink from comparing [my]Professional testimonials (now in my possession) with the vainest of these Gentlemen, yet, I lost four men, on the passage, and one the Day after the ship arrived at Sydney. Had this fifth man been sent to Hospital and died in the dockyard, or died in a cart, going up to the hospital – as too many have done; I should have gained the sum of 10s 6d, further I was advised to send this man to Hospital instantly but I am not yet so poor as to sell my humanity for 10s 6d. To prevent a recurrence of this indecent, unprofessional, inhumane, unchristian like practice, would it not be well to pay surgeons for all those whom they brought into Sydney, or Hobart Town? 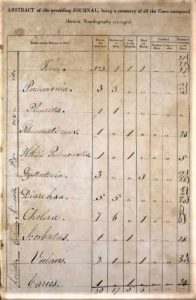 Dickson recorded 238 persons entered on the Sick List (excluding women and children). This was a very high number of entries, albeit there were those with more than one visit, and it included soldiers and convicts. Statistically more passengers were on the sick list than the number of convicts on the voyage!

The Nosological Abstract (right) shows the breakdown of ‘cases’ which in 1833 did not include the number of persons on the Sick List as it did in Burnett’s rules after 1836. It does indicate the number of cholera cases including one death on which I will comment below.

On the topic of cholera Surgeon Dickson writes, I humbly observe, that my chief reliance, should be on ventilation, early in the disease – when that could be practical. Case No 5 was an astonishing recovery – Graves [or Groves], four months after weighed 13 stone – having gained 2 stone.

James Graves/Groves was a 26-year-old Seaman diagnosed at sea off the Isle of Wight on 5th July. He was among the seven cases contracted almost three weeks before the ship arrived at Cork to embark the convicts.

It was not until after the terrible outbreak of cholera in 1854 that Dr John Snow was finally able to convince his own profession and the government of the origins of cholera. His discovery of a pathogen at the Broad Street water pump and his evidence thereafter, was certainly not in existence at the time of Java’s voyage of 1833. A second pandemic had reached London in 1832, ultimately causing around 55,000 death in Britain. Surgeon Dickson knew of the cholera pandemic as his general remarks made abundantly clear, but he would have known nothing of the origins of the disease. 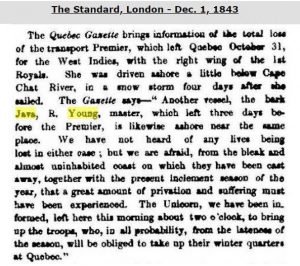 LR of 1843/44 notes that the vessel had been ‘Lost’. Per the Lloyd’s List report, the vessel left Quebec for Chatham on Oct. 29, 1843. And went on shore near Chat River – likely in very early Nov. 1843. The Chatham in question is, I believe, located in New Brunswick, Canada, now part of Miramichi. The Chat River (Rivière-Cap-Chat) is on the S. bank of the St. Lawrence River in Gaspe, Quebec, about 280 miles E. of Quebec City. I have now found further references to the vessel’s loss, which tell us that Java was carrying both troops and a cargo of timber at the time of her loss and that her crew and the troops were saved ‘by the boats’. Likely lost in bad weather, maybe during a snow-storm.