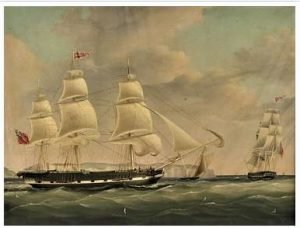 Isabella was a three-masted sailing ship of c. 580 tons, built on the River Thames at Rotherhithe by John Warwick and launched in 1818. The owner appears consistently as ‘Chalmers’, probably in partnership with other investors, including some of her captains, until 1834 when she was purchased by Duncan Dunbar.

Isabella transported convicts to Australia in 1818 – her maiden voyage to New South Wales – with subsequent voyages in 1822, 1823, and 1832. In 1833 and 1842 she made convict voyages to Van Diemen’s Land. She is not to be confused with a Whitby-built ship of the same name transporting convicts to NSW in 1840. In any one year, Lloyds Register lists up to 20 ships sailing with the name Isabella.

On various convict voyages there had been plots to mutiny; a convict was shot by a soldier; seamen refused to work; she had a colourful career. In one source I found a report that she was boarded by pirates (July 1838) but this was found to be erroneous and related to yet another ship named Isabella.

She was also a busy cargo ship making journeys to Australia, Bombay, Calcutta and Madras, including a contract in 1826/27 to China for the East India Company.

In 1825 Duncan Dunbar (the Second) and his brother John inherited a Thameside wine and spirit business from their father; but shipping was to become Duncan’s primary occupation, at first as owner and then builder. He was arguably the 19th century’s biggest shipowner in the world, managing at one time or another 73 clipper ships. His vessels were employed as Army troopships, including during the Crimean War; convict transports to Australia; emigrant ships to Australia and New Zealand; cargo ships carrying tea and spices from China and India.

Dunbar had Isabella surveyed in June 1834 after large repairs including new wales (the planks around the outside of the ship) and new topsides (the visible part of the hull between the waterline and the deck). She was rated a first class vessel of oak and teak ‘in a condition for the safe conveyance of dry and perishable cargoes’. Dunbar’s first voyage as owner was from Liverpool to Calcutta in 1835.

Dunbar owned Isabella from 1834 to 1846, employing Captains D Brown, C Munro, George Sinclair and Johnson/Johnston. He was, of course, Isabella‘s owner for the convict voyage of 1842. The ship was spruced up prior to the voyage with the addition of yellow metal sheathing and felt, some damage repaired, and was re-surveyed in October 1841.

Isabella finally sailed in January 1842 with 267 male convicts on board – from three different hulks lying in Portsmouth Harbour. The prisoners had been sentenced in the Central Criminal Court (75); at courts martial in Canada, Gibraltar, Jamaica and at home (23), the balance in General, Assizes and Quarter Session courts all over England.

No deaths from disease occurred in the convict population, but one convict committed suicide ‘in a fit of despondency’ by drowning. Four convicts were sent to hospital in Hobart on 23rd May. 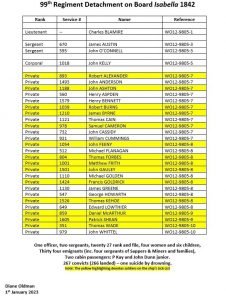 In 1842, Isabella was one of 23 convict ships arriving in Van Diemen’s Land from British ports – plus one wrecked on the journey. This was Isabella‘s last voyage to Australia. The troops were ultimately bound for New South Wales where the majority of 99th Regiment troops in Australia were then garrisoned. Guarding the convicts to Hobart are listed left: one officer, two sergeants, 27 rank and file troops, accompanied by four women and six children. A month later they would sail on Isabella to Port Jackson to join their regiment in NSW.

Half the rank and file of 99th soldiers on board Isabella were recorded on the surgeon’s Sick List and two of these – Thomas Forbes and John Ashton – were sufficiently serious to have case notes recorded, but all were soon returned to duty. Private #1110, Michael Golden was the only soldier on the voyage to serve in Western Australia. He discharged from the Army in June 1852 and settled in the Colony.

The Master for this voyage was Captain George Sinclair and the Surgeon Superintendent Campbell France.

Campbell France RN maintained his Surgeon Superintendent’s journal from 28th December 1841 to 21st June 1842 – thus he accompanied the guards to Sydney after disembarking the convicts in Hobart. France was a seasoned surgeon having a career with the Navy from his appointment as Assistant Surgeon in 1812 to his appointment as Surgeon in 1824. Ultimately he would serve on eight convict ships: four to New South Wales 1830/31, 1835, 1838/39 and 1840; four to Van Diemen’s Land 1827, 1829, 1837 and his last in 1842 on Isabella. He returned to England in August 1842 and died in November 1843 in Wester Lovat, Scotland.

The condition with the highest number of passengers on the Sick List was catarrh (76). Surgeon France must have been busy on this voyage with the extremely high number of persons recorded on the Sick List – a higher than usual attendance of 179. All were discharged from the ship’s hospital except for the four convicts admitted to hospital in Hobart.

A boy crew member was accidentally drowned – his name is not mentioned – which made the second drowning for the voyage, but no one died from sickness/disease, a point made by the Surgeon in his report on both occasions.

The last entry for Isabella in Lloyds Register with Duncan Dunbar as her owner is in 1846 where she is described as a barque, but with no record of a voyage. We can probably assume that Dunbar sold her in about 1847 to Smison & Co. which is first listed in 1848 along with the name A. Smison as master. She is again recorded as a barque with damage repairs and survey in that year, and a voyage from London to Quebec (left). Smison continues to be listed as owner and master in 1849 and 1850 but with no voyages recorded. No further Lloyds listings can be found after 1850.

There is a record of a British ship named Isabella destroyed by fire at Penang, Malaya on a voyage from Singapore to Penang in 1850 [Wikipedia]. With no details of tonnage or build-year on this record, it is impossible to validate.