In 1825 Duncan Dunbar (the Second) inherited a Thameside wine and spirit business from his father; but shipping was to become his primary occupation, at first as owner and then builder. He was arguably the 19th century’s biggest shipowner in the world, managing at one time or another 73 clipper ships. His vessels were employed as Army troopships, including in the Crimean War; convict transports to Australia; taking emigrants to Australia and New Zealand; taking tea to England from China; and spices and many other exotic commodities from India. 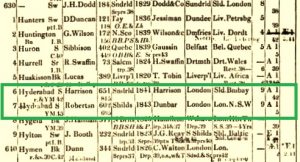 Hydrabad was built in 1843 by the Middle Dock Company of Holborn, South Shields on the Tyne. She should not be confused with another ship of similar tonnage with a similar name – Hyderabad – which had been built a few years earlier in Sunderland. This confusion can be seen – in some sources – when the two ships were deployed as convict ships to Norfolk Island, New South Wales and Van Diemen’s land between 1844 and 1850. 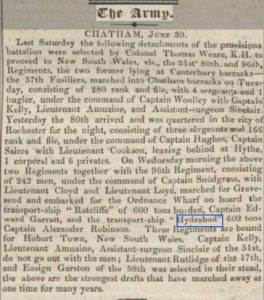 Two hundred and forty-six officers and men of the 96th Regiment were on the voyage that left Deal on 4th July and arrived in Sydney on 17th October 1843. Officers and men of the 17th, 51st and 99th were also on board. Hydrabad then sailed to Launceston arriving on 4th November 1843. The Master on the voyage was Alexander Robertson who was also Master of this ship when she arrived in Norfolk Island as a prison ship in February 1845.

It appears that Launceston was to become the headquarters in Van Diemen’s Land at this time, with most of the troops who arrived on Hydrabad being posted at HQ or to regional towns between Launceston and Hobart. However, many troops of the 96th were also serving in South Australia, New Zealand and Norfolk Island while being recorded on the Launceston Pay Lists. Indeed, it seems from a ‘Memoranda’ to be found at the beginning of the October to December 1843 quarter [WO12-9615-89] that some kind of confusion reigned with regard to Pay Lists for New Zealand and Adelaide.

Three officers of the 96th Regiment were on board: Captain J Snodgrass, Lieutenant James Clyde and Ensign J W Lloyd.  Of the 242 ‘other ranks’ who arrived at Launceston on Hydrabad (one soldier died on the voyage), 27 served in the Swan River Colony; among them were Privates Thomas Abcott, John Bowra, Thomas Briggs, John Brown, John Hammond and Henry Holte.

Assistant Surgeon George C Meikleham was attached to the 51st Regiment on the Hydrabad‘’s voyage, rejoining the regiment in Hobart on 17th November 1843. He served in VDL for a year and then left for the Swan River Colony on Champion to serve in the 51st Detachment in Perth until the Regiment left for India in March 1847.

On 25th May 1845, Hydrabad (Master Alexander Robertson) was on a voyage from Sydney to Calcutta with a cargo of live stock and 23 passengers, when she was wrecked off Cumberland Passage, Murray Island, Torres Strait. The crew and 23 passengers were saved. 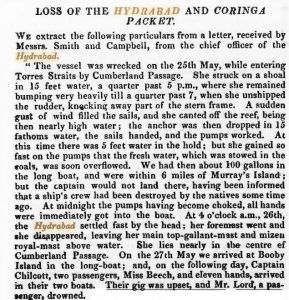 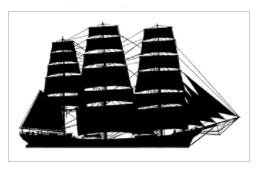