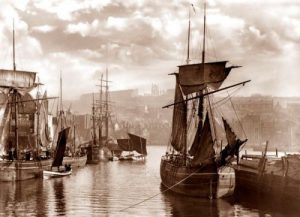 Lloyds of London Register 1840 lists ‘Richardson’ as the ship’s owner. Christian Richardson & Co. (shipowners) and Holt and Richardson (ship builders) were families intertwined in the shipping business as the Dock Company which established a dry dock and shipyard on the eastern bank of the River Esk. They also operated the ropery at Spital Bridge. Between 1804 and 1819 Holt and Richardson built 27 ships for a total of 7226 tons, perhaps the last of which was Hindostan launched at Whitby in 1819, at that time 424 tons.

By the time of Hindostan’s voyage in 1840, she had undergone thorough repairs in 1836 and further changes in 1839; she became a sailing ship of 544 tons. Her first convict voyage was to New South Wales in 1821, her second and third voyage were to Van Diemen’s Land arriving in 1839 and 1841 respectively. In between the convict voyages, she was a general trader across the Atlantic and to India. She is not to be confused with other ships of the same name built between 1798 and 1869, including a Royal Navy ship built in 1841.

The Surgeon’s Journal records 200 ‘boys’ and 10 adults bound for Van Diemen’s land – but most other resources do not make this distinction. The Surgeon had examined the prisoners on the prison hulk Euryalus over two days at the end of September. Euryalus was in service at the Battle of Trafalgar and decommissioned as a hulk in 1825. On 7th October 1840, 209 male convicts sailed from Sheerness to Hobart on Hindostan. An adult convict, Richard Blundell, was ordered to return to the hulk the day before sailing. The young prisoners were sentenced in the Central Criminal Court (Old Bailey), in the Scottish courts of Aberdeen, Edinburgh and Glasgow, the balance in County courts all over England. One prisoner was sent to Hobart hospital on arrival. Sixty convicts were landed in Hobart Town and a few days later the remaining prisoners sailed for Port Arthur arriving on 26th January 1841.

Ten ships transporting over 2200 convicts (male and female) left Britain for Van Diemen’s Land in 1840, along with their guards from the 96th Regiment. The number of ships coming and going became so common place, that even the press barely mentioned any detail other than the departure and arrival dates. Hindostan’s convict guards numbered one officer and 30 rank and file of the 96th who embarked at Deptford on 19th September 1840. Four guards were recorded on the Sick List and all but one returned to duty within a week. Five of the soldiers served in Western Australia with Privates Samuel Berry, Richard Buck, Edward Lavin and William Robinson receiving their Army discharges in Perth, then settling in the Colony. The Master of the vessel was George Lamb(e), the Surgeon Superintendent Andrew Henderson R.N.

Hindostan sailed from Sheerness on 7th October 1840 and arrived at Sullivan’s Cove, Hobart Town on 19th January 1841 – a fast passage of 104 days. 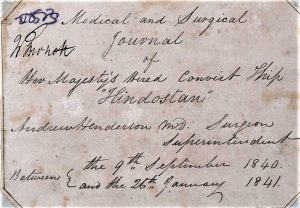 Surgeon Andrew Henderson RN, MD, FRCP, MRCS, began his medical career working with convicts in Portland Prison in 1811, the year he was appointed Assistant Surgeon in the Royal Navy. He went on to make an astounding nine voyages on convict ships to Australia from 1829 to 1842; allegedly only ten convicts out of over 1750 convicts died on his watch. In July 1839 Henderson published a paper on the prevention and treatment of scurvy in the Edinburgh Surgical Journal and in 1845 published ‘Scraps and Facts of Convict Ships’ in Devonport, Tasmania.

Surgeon Henderson boarded the ship on 9th September 1840 and maintained his Journal until disembarking in Port Arthur on 26th January 1841; thus he remained with his charges from when they boarded to their final incarceration at Point Puer, Tasmania.  This first British purpose-built reforming institution for criminal boys operated from 1834 to 1848 and predated Parkhurst Prison on the Isle of Wight by four years.

Henderson records 183 attendances on the Sick List (some men would have been listed more than once); all of them except the hospitalised man were discharged. Their conditions included syphilis and gonorrhoea, rheumatism, dysentery, scurvy, erysipelas and anthrax. The anthrax case was a convict, Matthew Bryan aged 18, described by Henderson as a poor wretch whose multiple crimes and punishments were the result of intemperance in drinking… he gave a great deal of trouble in the ship by his irregular conduct, but his worn out and haggard appearance got him off from corporal punishment. Henderson provided a detailed ‘Nosological Synopsis’ for the voyage, but in this instance it was very difficult to read and reproduce here.

Hindostan foundered in the Atlantic Ocean on 27th August 1851 on her way from Whitby to Quebec. Nine of her sixteen crew went down with the ship. The survivors took to a boat and were rescued by the schooner Martha Greenow.