Emma Eugenia was built in 1833 but no ownership details were available from Lloyds Shipping Register until 1836 when she was recorded as being owned by Joseph Somes. Somes (born 1787, Stepney, London) began his maritime career as an apprenticed lighterman to his father Samuel, a ship owner, and at age 21 Joseph was captain of one of his father’s ships. After his father’s death, he and his elder brother took over an already prosperous business which included sailmaking, a chandler business and chartering for the East India Company; later, after the EIC broke up its fleet, Joseph acquired a number of its ships. He became sole owner of the company and by the time of his death in 1845, he was the owner of up to forty ships making him one of the largest private ship owners in the world. He had been one of the founders of the Lloyds Register of British and Foreign Shipping (1834) and chartered ships to the government for the transport of convicts, troops and cargo to India, Australasia, Africa and The Americas.

Somes specialised in convict ship ownership. Between 1839 and 1846, Somes’s companies owned around 25 convict ships, all brokered by Lachlans & Co.  Somes & Co. also owned the Parmelia, the ship that brought Captain James Stirling to the Swan River Colony. Somes gave his name to one of his ships: Joseph Somes built in 1846; another, Maria Somes (1841), was named for his second wife. Although there are no details in Lloyds Register prior to 1836, we can assume by that year Somes owned Emma Eugenia and was utilising her as a trader between London and China.

Emma Eugenia was built in Whitby in 1833. She was a Barque of 383 tons built of teak with dimensions of 105 ft. x 29 ft. x 20.2 ft. I have been unable to establish the company that built her, but the most active ship builders in Whitby in that period were: Thomas Broderick, William Hobkirk and the Barrick family comprising Henry, George and George Junior. My money would be on the Barricks, building an impressive number of ships (60+) between 1828 and 1855. The Campions also loomed large in Whitby ship building, but somehow the dates of their operations don’t fit so well. 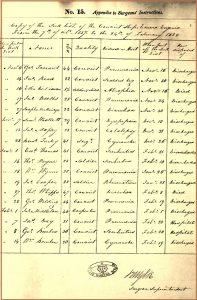 Emma Eugenia made this, her first convict transport voyage, destination New South Wales in 1838. All other voyages were made to Van Diemen’s Land arriving in 1842, 1844, 1846 and 1851. All told she embarked around 800 convicts. The VDL voyages accounted for 600 female convicts.

On 28th October 1837, two hundred male convicts with an average sentence of nine years embarked from the Portsmouth prison hulks. Sixty one were sentenced at the Old Bailey, London’s Central Criminal Court. Seven soldiers had been sentenced at courts martial, the balance came from courts in counties all over England.  Convict, Thomas Whipps, died on board (Diarrhoea), and on landing, two were sent to Sydney hospital where they subsequently died. 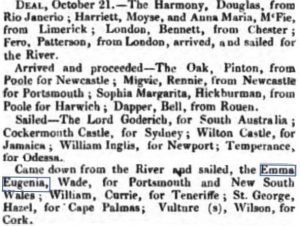 The Chatham Depot 51st Regiment Musters and Pay Lists indicate that Lieutenant A T Rice, Sergeant Bernard (Barny) Turley and 17 Privates embarked at Deptford on Emma Eugenia on 17th October 1837, all paid in advance to 23rd February 1838. This boarding was preceded by a nine day march from Chatham to Gravesend followed by a boat trip to Deptford. A newspaper bulletin suggests Emma Eugenia finally sailed from Deal, Kent on 11th October 1837 for Portsmouth. Privates William Quilch and William White later became part of the 51st Swan River Colony Detachment and settled there after taking their Army discharges in Perth on 31st March 1847.

Other Guards comprised officers and other ranks from the 28th, 50th, 52nd and 80th Regiments. The Master of the vessel was Giles Wade, the Surgeon Superintendent Robert Wylie.

Emma Eugenia sailed from Kent’s shores on 11th October for Portsmouth. She then left Portsmouth on 6th November 1837. The Surgeon, in his Journal, reported a fast and favourable passage to Port Jackson where she arrived on 9th February 1838 after a passage of 95 days.

Wylie maintained a Journal from 7th October 1837 to 4th February 1838. This voyage was remarkably speedy and trouble-free. The number of persons on the Sick List was quite low, but surprisingly Wylie maintained a high ratio of case notes (15) to persons on the list (18) – perhaps demonstrating scrupulous record-keeping for his charges. There were two deaths at sea: the convict Whipps mentioned above and the 15-month old child of 51st Regiment guard Thomas Dickinson. Three guards from the 51st Regiment were on the Sick List.

As usual on such a long voyage, Scorbutus (Scurvy) was present and treated with a solution of Nitre and vinegar as well as the more effective lemon juice and sugar. Pneumonia was the most common health problem on the voyage, with six cases documented, resulting in a death in hospital after landing.