The Ship’s Builder and Owners

Eden was built in 1826 and her first appearance in Lloyd’s Register is in 1827. Unfortunately the name of the builder is not present in the Register, but this 513 ton vessel was built at ‘River’ (meaning the River Thames) and owned by Colville & Co. From the outset the ship is listed on voyages from London to Jamaica in the West Indies with the same Master: P Slader (not Slater!). There were many shipyards on the Thames, but I have not yet been able to discover the builder of Eden, nor any information about her owners, Colville & Co.

In August 1836 Eden made her first voyage as a convict ship to New South Wales. This seems to have coincided with a change of ownership from Colville to Joseph Somes. Somes at that time was beginning to become heavily involved in the convict ship chartering business; between 1839 and the time of his death he owned around 25 convict ships. Eden made four voyages as a convict transport in 1836 and 1840 (NSW), 1842 and 1848 (VDL).

According to Lloyds Register, Joseph Somes and P Slader spent eight years together in an Owner/Master arrangement from 1836-1843. However, in 1840, the year of Eden’s voyage with the 96th detachment of convict guards, Somes remained owner, but the ship sailed with a different master. Sometimes I worry about the accuracy of Lloyds – but perhaps there was a change of plan after publication.

Seventeen convict ships left Britain for Australia in 1840. Eden was the seventh and last to set sail for New South Wales. Eden left Deptford for Woolwich with guards from the 96th Regiment and a ship’s surgeon on board. The Surgeon Superintendent recorded in his journal that the ship proceeded to Woolwich and received 150 convicts from two hulks; these would have been Justitia and Warrior. This was followed by a draught of 120 convicts from the hulks at Chatham: Euryalus and Fortitude.

Thus Eden left England at Sheerness with 270 convicts on board. The average sentence was 12 years, among them 50 ‘lifers’. Five of the convicts had been soldiers court martialled at Woolwich or Chatham; 28 were sentenced at the Central Criminal Court (Old Bailey); others were sentenced in Assizes and Quarter Sessions courts in counties throughout England. Prisoner Richard Gould was tried at the Old Bailey for burglary and theft and would continue to be troublesome even before the Eden set sail, when he attempted to escape.

The Master of the ship was Captain Henry J Naylor, and the Surgeon Superintendent George Ellery Forman, R.N.

Ensign Frederick Pearce (Pierce) with 29 rank and file of the 96th Regiment embarked Eden at Deptford on 27th June 1840. Only two of the guards ultimately served in the Swan River Colony. One of them, Private Robert Henderson took his Army discharge in Perth and became a settler.

Two corporals and 13 privates, convict guards from the 96th detachment, were recorded on the Sick List. Of these, 29-year-old Private Thomas Marshall died of a stroke (Apoplexia) on 7th August, one of three deaths recorded on the voyage. There were as many seamen on the Sick List as soldiers, leaving the convicts a healthier group by comparison. 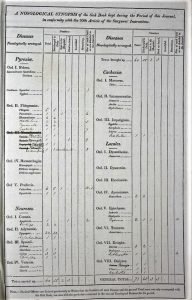 George Ellery Forman R.N. maintained the Eden’s surgeon’s journal from 16th June to 1st December 1840. He was appointed to the rank of surgeon in the Royal Navy in September 1828.  Forman was an experienced convict ship surgeon when he embarked on Eden. He had sailed with Lady McNaughton 1835 (NSW), Platina 1837 (VDL) and Pyramus 1838/39 (VDL). His journal was somewhat longer than most – at 30 pages; much of the additional material was in his General Remarks. Unfortunately two key pages of these remarks are missing from my copy.

The Nosological Synopsis indicates that there was only one case of Scurvy during the voyage. The 71 attendances to Sick Bay were mainly minor conditions for which most were cured and returned ‘to duty’. However, two men were hospitalised and three died: Thomas Marshall the soldier mentioned above, Stephen Buckingham a convict who died of a continual fever (Febres Synachus) and James Jones a seaman who died of Meningitis.