Unfortunately (and unusually) the convict voyage of Duncan is not recorded in Lloyds Register of shipping during the period of her voyage as a convict ship to Van Diemen’s Land. After a long search, I now have notes from a miscellany of sources which have brought me to this conclusion: 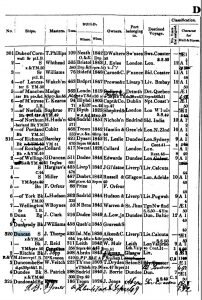 Duncan was built in 1836 at the ‘Bath’ shipbuilding yard, Isle of Man, owned by James Aiken (Aikin) of J Aiken & Co. a merchant and shipowner of Liverpool. She was registered in Liverpool as Ship No. 3815 and was the 192nd ship to be registered in that year.  By at least 1835 the Bath yard was under the management of Mr John Winram, a well-known Manx ship builder and owner in his own right. In 1836 when Duncan was launched, Aiken was residing in Liverpool and had been nominated to stand for the Reform Party in Liverpool’s local government elections (he declined). In 1839 he was back in Douglas, Isle of Man, preparing to establish a rope-walk and chain-cable manufacturing business on an ‘extensive scale’. It would appear likely that Winram also managed this business – or at least was set up in the business by Aiken – as by October 1840 Winram was advertising in the Douglas newspapers.

I didn’t find Aiken’s ship Duncan in Lloyd’s Register until 1850, by which time she was sailing from Liverpool to Calcutta and some changes had been made to her structure since launch, resulting in an increase in tonnage from 533 (1836) to 644. She had large repairs made to her in 1846 including a new deck (no doubt responsible for the additional tonnage). In 1850, she was sheathed in felt and yellow metal and other small repairs were undertaken. She was surveyed in Liverpool in 1850 as First Class. 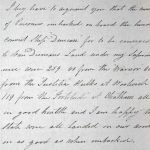 Two hundred and fifty-nine male convicts embarked on Duncan: 60 from the prison hulk Warrior and 80 from Justitia at Woolwich, with a further 119 from Fortitude at Chatham. These men had been sentenced to an average of 11 years transportation, 24 with life imprisonment. Twenty-three were convicted in the Old Bailey (Central Criminal Court); 20 in Justiciary Courts of Scotland; the remainder in the Assizes and Quarter Sessions of England. The ship’s surgeon remarked that the convicts were ‘all in good health and I am happy to state were all landed on our arrival in as good as when embarked’.

During 1841 sixteen convict ships arrived in Van Diemen’s Land from British ports; Duncan was but one of them, and it was her only voyage as a convict transport. The 96th Regiment guards for the voyage comprised Lieutenant Hon. J M Stourton, two sergeants and 38 privates. Of the two soldiers who later served in Western Australia, Private William Dilley would purchase his Army discharge in the Colony and settle there. None of the soldiers were admitted to the Sick Bay during the voyage. 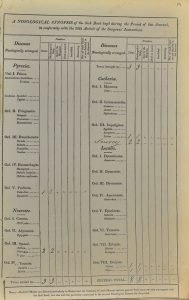 McDowell maintained a journal for Duncan‘s voyage from 24 Nov 1840 to 29 Apr 1841. This appears to be one of the healthiest ships I have thus far recorded. McDowell’s notes show that he was prepared to vaccinate for variola (smallpox) anyone who embarked from the prison hulks who had not been vaccinated or previously had the disease, and from thereon he records case notes on only eight passengers which are included in the 34 attendances on the Sick List (see Nosological Synopsis right).