The brothers William and John Mowbray Gales both born late in the 18th century, began building ships out of the South Hylton shipyards (left) as early as 1812. They, along with their offspring, possibly built over 200 ships in the yards on the south bank of the River Wear, about 3 miles west of Sunderland.

Canton, a ship of 507 tons, built in 1834, first appears in the Lloyds Register Supplement in that year. She was built by William Gales at a time when the brothers were operating separate enterprises. Canton made her first voyage as a trader to China. She became a convict ship in 1839 making her only voyage in this role from Spithead in the English Channel to Portsmouth and onward to Van Diemen’s Land. 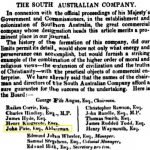 Canton was built by Gales for Pirie & Co. which I can only tentatively identify as being a company headed by Sir John Pirie, a merchant and one of the largest ship brokers in England. Pirie (1781-1851) was made 1st Baronet of Camberwell in 1842 upon his retirement as Lord Mayor of London. He had strong connections in Australia and New Zealand, becoming a director of the South Australian Company in 1836. He part-owned the schooner, John Pirie, which was the first ship to leave for the new Colony of South Australia.

By the end of Canton’s only voyage as a convict ship, she was sold to Gould & Co. After repairs she returned to her trading route to China from 1842 to 1845, after which she was sailed by Captain David Friend to Quebec. Friend then brought her to Sydney in 1848 and for his trouble went down with the ship (see final paragraph on this page).

Eleven convict ships left Britain for Australia in 1839. Canton was the fifth one to set sail for Van Diemen’s Land that year. The ship left Deptford with guards from the 96th Regiment and the ship’s surgeon on board. She sailed into the Solent and arrived at Spithead the following day where 240 convicts from the hulks Leviathan and York were boarded.

Both hulks had been 74-gun Third-rate naval ships of the line. Leviathan was launched in 1790 at Chatham. She fought at the Battle of Trafalgar and used as a prison hulk from 1816. After spending two years as a naval gunnery practice target, she was sold out of service in 1848. York was launched at Rotherhithe in 1807 and converted to a prison hulk in 1819 in Gosport and London. She was taken out of service as a prison ship in 1854.

The prisoners’ average sentence was 11 years with 24 ‘lifers’ among them. Around 200 had been sentenced at the Central Criminal Courts (the Old Bailey) in London, or county assizes and quarter session courts all over England. Their journeys from English local gaols to the hulks had been relatively short – at least in distance if not time served. However, the balance of the prisoners had come from overseas – sentenced in military courts in Bermuda, Corfu, Jamaica, Malta, Nova Scotia and Upper and Lower Canada. Those from Canada were French Canadians and Americans who sympathised with the ‘Patriot’ cause and had been involved in the 1837 uprisings against the British and had arrived at Liverpool from Quebec on Captain Ross in December 1838. Some would be sent immediately for incarceration at Newgate Prison prior to facing another Court appearances in London, others sailed to the Portsmouth hulks. They were all to be transported to Van Diemen’s Land on Canton, as were their fellow insurrectionists on the convict ships Buffalo, Marquis of Hastings and others which sailed with guards from the 51st Regiment and are also the subject of pages on this website.

American-born Linus Wilson Miller was one such American sympathiser. This brash young student of law was among 12 men indicted at Upper and Lower Canada between July and October 1838 who journeyed from Quebec, to Liverpool, London, the Portsmouth hulks, and thereafter embarked on Canton. Linus Miller, Jacob Beamer, James Gammell and John Grant were tried at Niagara and received ‘Life’, the remainder, lesser sentences. Miller spent his 22nd birthday on the convict ship Canton, was five years in VDL, and received a full pardon. Upon his return to America he wrote and published Notes of an Exile to Van Diemen’s Land. It is a harrowing account of conditions on the ships and in the gaols, but at times is glib and entertaining – especially his courtroom grandstanding, captured in detail by extraordinary recall. His story is available online through ‘Google Play’. About forty rank and file of the 96th Regiment Guards embarked Canton at Deptford on 5th September 1839. Lt. Colonel William Hulme and Lieutenant E W Scovell would accompany them on their journey from Portsmouth to Hobart. The detachment of guards would then sail on to Sydney where the main body of the regiment was stationed. Only one of the guards ultimately saw service in the Swan River Colony, but he happened to be one who was discharged in Perth and settled in the Albany area of Western Australia.

A Sergeant, Corporal and six privates from 96th Regiment were recorded on the sick list. Catherine Sale was also recorded with Dyspepsia. She was the wife of Private John Sale, our ‘settler’.

Master of Canton was Captain John Mordaunt, and the Surgeon Superintendent was John Irvine R.N. The surgeon had no cases of scurvy on board, and it was therefore decided unnecessary to put into St Jago or the Cape of Good Hope for fresh provisions. The journey was a fast passage of 112 days.

John Irvine R.N. maintained the Canton‘s surgeon’s journal from 24th August 1839 to 17th January 1840. Irvine received his appointment as Superintendent Surgeon on Canton on the 24th and embarked on Canton 27th August. In a long career with the Royal Navy, it was Irvine’s first and only voyage on a convict ship. In a number of comments throughout his journal, Irvine indicates he was a little unsure of the protocols involved in his position. He wrote out his own ‘Rule and Regulations’ in duplicate which he posted in conspicuous parts of the prison ship.

Although there were 130 attendances recorded on the Daily Sick List, more than half of the visits were for common ailments – mild Diarrhoea and Catarrhus.  Unusually there were no cases of Scurvy (as mentioned above). The Lieutenant Governor gave his approbation as follows

There were two convict deaths on board; both had been soldiers court-martialled in Bermuda. William Mackie died of Apoplexy on 2nd December, and Denis Gennings finally succumbed to Phthisis on 5th December 1839. The Journal shows that Gennings (Case No. 8) received a major portion of Irvine’s ministrations (seven pages of notes) indicating a high level of care before Gennings died.

Canton (now owned by Gould & Co.) sailed from Plymouth on 20th February 1848 with over 200 immigrants and merchandise on board; she arrived in Sydney on 12th June 1848. The ship, carrying livestock, then set sail for Hong Kong on 3rd September. However, on 4th October, during a very heavy gale, Canton ran stern-first onto Tinian Island in the Northern Marianas Group and within ten minutes was a total wreck. Just one boat was successfully launched with a handful of crew aboard and after ten hours it reached shore. The small number of survivors later made their way to Manilla via Guam. Twenty of her crew, including Captain David Friend and John Stamp, First Mate, were lost.