This convict ship’s name derives from the 1704 Battle of Blenheim in the War of the Spanish Succession, when John Churchill, Duke of Marlborough and Prince Eugene of Savoy attained a major victory against the French and Bavarian forces. Marlborough, of course, was rewarded by a grateful Sovereign. Three hundred years later, despite many financial and political set-backs, Blenheim Palace is a World Heritage Site, a mecca for tourists and famous for being the birthplace of Sir Winston Churchill.

This Blenheim, built in 1834, was utilised as a convict transport to Australia on three occasions: 1834 (NSW), 1837 (VDL) and 1839 (NSW). Following that, she transported immigrants to Australia and New Zealand.

We have found no fewer than eight other vessels named Blenheim in the 19th century Lloyds Register. One of these, built by the Middle Dock Company of South Shields in 1845, made three other trips with convicts to Van Diemen’s Land and/or Norfolk Island and should not be confused with the three voyages between 1834 and 1839 already mentioned.

Lloyds of London Register 1839 lists ‘Brown & Co.’ as the ship’s owner. As our Blenheim was built in 1834 in Jarrow, we assumed this was Brown & Co., Newcastle, England, not J & A Brown of Newcastle, New South Wales. In 1844 Blenheim‘s ownership changed to H Barrick of Whitby.

As for Blenheim‘s builder, this was even more problematic. In 1834 there were about 45 ships built at the various Tyneside yards; however, some builders were unidentifiable and Blenheim at Jarrow was one of them.

Blenheim, 375 tons, was classified as a Barque and was a wooden sailing ship with at least three masts, all of them fully square rigged except for the stern most one, which was fore-and-aft rigged. A Lloyd’s Survey certificate issued in October 1835 assigned an A1 character for nine years. The Lloyd’s Surveyor noted that the frames and planking were of good quality English oak and between decks pine was used. She was copper-fastened, and by the 1839 voyage was sheathed in yellow metal.

On 19th May 1839, 200 male prisoners sailed from Kingstown, Dublin, bound for Port Jackson, NSW. The ship’s journal indicates that only 196 of the convicts landed with James Maginness, Martin Graham, Michael Farrely and James Benson dying at sea.

A dozen ships transporting 2300 convicts arrived in NSW from Britain in 1839; another left Calcutta with 16 military prisoners on board, called in first to Hobart, and then to Port Jackson, NSW. The number of ships coming and going became so commonplace, that even the press barely mentioned any detail other than the departure and arrival dates. In the case of Blenheim, the press and many other sources under-stated the number of 51st  Regiment military guards on board. The Chatham Depot Musters and Pay Lists indicate that 30 men embarked on Blenheim on 23rd April, all paid in advance to 30th August: Ensign Walter Kirby, one NCO and 28 Other Ranks. Sergeant William Burrell and Private Francis Mason later became part of the Swan River Colony detachment, took their Army discharges in Perth and settled in the Colony. The Master of the vessel was John Grey, the Surgeon Superintendent William McDowell R.N. A 28th Regiment Adjutant/Ensign McGregor was also on board on arrival in NSW. He may have been on board since April, or perhaps embarked with the convicts at Dublin on 8th May 1839.

The 51st guards presumably remained with the convicts until they disembarked at their destination in Port Jackson, a process that was completed on 8th October 1839. The Army records indicate that the guards arrived in Hobart on 11th November 1839 – but unfortunately not the name of the vessel that took them to VDL where they joined the rest of the detachment. It was most likely a coastal schooner. Meanwhile, Blenheim sailed to India via Manilla from NSW on 25th October 1839.

Blenheim sailed from London in April 1839 (specific date unknown) bound for Ireland. She arrived in Kingstown, Dublin in the first week of May and sailed on 19th May for New South Wales. By 6th August she arrived at the Cape of Good Hope and took on water and provisions. About four weeks out from the Cape, Blenheim ran into some bad weather but arrived unscathed in Port Jackson on 27th September (131 days). 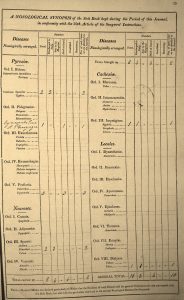 William McDowell R.N. was born c.1793 and became a member of the Royal College of Surgeons in 1814. He joined the Royal Navy and was appointed to the rank of Surgeon in August 1815. McDowell must have been comfortable in his role as Surgeon Superintendent on convict ships as he made six voyages from Britain to Sydney or Hobart between 1824 and 1842; Blenheim was the fourth of these journeys. Each time he was required to maintain a Journal documenting the specific and general health of his charges – and this included ship’s military guard and crew as well as the convicts.

McDowell began his 27-page Journal on 23rd April and completed it on 8th October when the last of the convicts disembarked. Out of 200 convicts, only ten reported to the ship’s sick bay. Of the deaths mentioned above, three died of dysentery which almost certainly was caused by the poor quality of water on board. McDowell wrote: [the water] emitted a most offensive putrid effluvia, almost intolerable, and caused many bowel complaints. Benson, the fourth of the deaths at sea, died from tonsillitis. 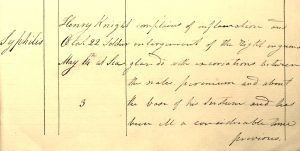 Three of the 51st guards were on the sick list: George Baker, Henry Knight and James Punter (twice). Each of them was treated and discharged to duty. In the case of Private Knight, he was put on the sick list on 14th May 1839, at sea prior to reaching Dublin, and discharged by McDowell on 23rd July 1839. The Surgeon recorded tht he had been ill a considerable time before presenting to him with gonorrhoea. Knight denied any ‘connection with the girls’ before embarking having previously been turned down for transportation because of a similar infection.

Blenheim was sailing from London to Quebec in 1845/46 when she was reported missing. She was not listed in Lloyds thereafter.