Augusta Jessie was built at Sunderland in 1834, a 385 ton Barque. She first appeared in the Lloyds Register as Entry No. A1088 both owned and captained by ‘Chamberlain’. I can find nothing about a Chamberlain company except that it was probably London-based. On 29th September 1834 the Master, Henry Edenborough, sailed her from Portsmouth to Hobart in Van Diemen’s Land, arriving 22nd January 1835. It is likely that during her return voyage, negotiations were underway for her sale to Pirie & Co. of London as she appears in Lloyds Register of 1836 under that ownership. Subsequent convict voyages to VDL (1838) and Norfolk Island via Sydney, NSW (1839/40) were under the ownership of Pirie. All three journeys carried British Army troops acting as Convict Guards.

The 155 male convicts who embarked on board Augusta Jessie at Kingstown, Dublin, had been tried and sentenced in an assortment of county courtrooms in Ireland. Some of those on board were ‘young offenders’ – 15 years and younger – and at least another eight convicts were military prisoners. The latter were co-opted as a ‘constabulary force’, enforcing cleanliness and good order on the voyage. These men displayed such excellent conduct throughout the voyage that it was reported to Governor George Gipps, who ordered them all to be landed at Sydney to join the mounted police of the Colony. There were no convict deaths on board, although four were admitted to hospital upon arrival. 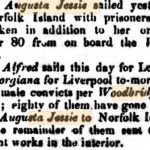 For further information about shipboard health, welfare and general activity and behaviour, click here for the ‘Surgeon’s General Remarks’ which, while accurately reported, is a summary transcript written in the third person provided by the National Archives, Kew.

On the 14th March the Sydney Gazette reported that eighty of the men of the Woodbridge (the previous ship into Port Jackson) had been boarded on the Augusta Jessie. They joined 120 of the Dublin men for a complement of 200 convicts to sail on to Norfolk Island.

Between October 1839 and February 1840, up to a dozen ships transporting around 1200 male and female convicts arrived in New South Wales, Norfolk Island or Van Diemen’s Land, along with their guards from the 51st Regiment. During this period we have a good many newspaper reports on the comings and goings of these ships. Augusta Jessie was just one of them.

The 51st guards for Augusta Jessie‘s voyage embarking at Deptford, comprised only eleven privates, two women and a child and no officers or NCOs. The military command for this voyage fell to Captain Edward Hill and Ensign L Mitchell of the 96th Regiment with 31 of their own men. Three of the 51st Regiment guards later served in the Swan River Colony including Private Samuel Wynne who took his Army discharge in Perth and settled in the Colony. The Master of the vessel was Captain J S Sparke (notwithstanding the Lloyds listing of Henry Edenborough) and the Surgeon Superintendent Thomas Russell Dunn.

Eleven 51st Regiment guards disembarked at Port Jackson (their arrival is not mentioned in the Press), while the Augusta Jessie and eleven men of the 96th Regiment sailed on to Norfolk Island.

The 51st guards embarked Augusta Jessie at Deptford on 11th October 1839. The following day they sailed to Kingstown, Dublin whereupon arrival on the 24th, the convicts were embarked in four batches, a number of them rejected by Surgeon Dunn as being unlikely to survive the voyage. This process took almost three weeks and Augusta Jessie finally left Dublin on 11th November bound for Norfolk Island via Sydney. Upon arrival in Port Jackson on 25th February 1840, there was a reshuffle of convicts as described above and the 51st troops disembarked. The passage from Dublin to Norfolk Island took 161 days.

Meanwhile, the eleven men of the 51st Regiment sailed from Port Jackson on the schooner Marian Watson which arrived in Hobart on 4th April 1840; thus their passage from Deptford to their final destination took almost six months. 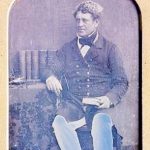 Thomas Russell Dunn RN was born in Scotland in about 1805. He became Assistant Surgeon in the Royal Navy in 1824 and appointed Surgeon in 1835. He received his medical degrees from Glasgow University (MD 1828, CM 1860). He led a varied and interesting career both before and after his two convict voyages. His overseas naval service included stations in St Helena, South America, the Mediterranean and the Pacific. At home he held positions as Deputy and then Inspector General of Hospitals and Fleets, and Honorary Surgeon to HM Queen Victoria. 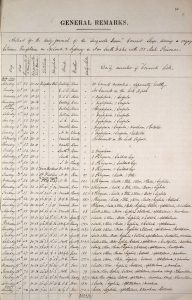 The last of Augusta Jessie’s convict voyages (1839/40), was the first convict voyage undertaken by Surgeon Dunn. It was a long and convoluted journey and we are fortunate that Surgeon Dunn excelled himself in record keeping. His ‘General Remarks’ are available in a link from a previous paragraph herein and the ‘Abstract of Daily Journal’ Dunn made of the journey is also invaluable (extract right); it is something not often seen within the pages of a surgeon’s journal.

The Nosological Synopsis indicates that there were 16 cases recorded in detail in Dunn’s journal and although 76 visits were made to the Sick Room, only one man died on board – a seaman. Scurvy seems to have been absent from this voyage which is unusual.

Back in England after the Augusta Jessie voyage, Dunn made another convict voyage on Waverley from Dublin to Hobart from April to September 1841. While still in Australia he was appointed to investigate conditions on the New York Packet, the enquiry being held at Sydney’s Quarantine Station in October 1841. Dunn returned to England in February 1842 and his career became land-locked thereafter. He died in Scotland in 1866.

Augusta Jessie does not appear in the Lloyd’s Register after 1860/61. She was listed as missing on a journey commenced on 3rd January 1862 from New York to the United Kingdom carrying grain and other cargo. It was assumed her crew of 12 perished.