HMS Anson has arguably been the most interesting convict ship profiled on this website to date. Of over 600 voyages transporting around 162,000 prisoners to Australia from 1788 to 1868, Anson was the largest vessel and carried the most convicts. Despite this, only one death was recorded on board. Nonetheless, she was not your run-of-the-mill Royal Navy ship of the line. About her arrival, one newspaper reported, HMS Anson once a 72 [sic] line-of-battle ship which has often carried the thunder of Britain amongst her foes. How different now her destiny! – employed as a receptacle for the degenerate Englishmen who have been spurned from the bosom of society. In fact, Anson never fired a shot in anger throughout her career of nearly 40 years!

HMS Anson, built in 1812 for the Royal Navy at Paull on the river Humber, was one of ten ships of that name built between 1747 and 2021. Undoubtedly all but the first two were named for Admiral Lord George Anson, 1st Baron.

George Anson joined the Royal Navy at the age of 15 and served for over 50 years. He was elected Member of Parliament for Hedon in Yorkshire in 1744. He was appointed First Lord of the Admiralty in Whig governments from 1751 to 1756, and again in 1757 to June 1762 when he died in office at the age of 65. His reforms included the removal of corrupt defence contractors; improved medical care; submission of a revision of the Articles of War to Parliament to tighten discipline throughout the Navy; uniforms for commissioned officers; the transfer of the Marines from Army to Navy authority; and a system for rating naval ships according to their number of guns.

HMS Anson was launched on 11 May 1812. She was a 74-gun 3rd rate ship of the line built under contract for the Royal Navy. Her specifications are comprehensively recorded here. By August 1812 she was in Portsmouth dockyard where final fitting was completed. She remained in Portsmouth until 1831 when she was fitted as a ‘Lazarette’ (hospital ship), following which she served in Leith and Stangate Creek in quarantine service.

Anson underwent a refit for her voyage to Australia starting in May and completed in August 1843 at a cost of £19,137. In July 1843 plans were drawn for ‘The Lower and Orlop decks of Anson as fitted for a female convict ship prepared for the guidance of the authorities in the Colony’. In October 1843, Anson made her last sea-going journey conveying a consignment of all-male convicts. Some sources indicate that female convicts were aboard, but this was not the case.

Boat builder Thomas Steemson was bankrupted at Fishlake, South Yorkshire in 1788. About ten years later he set up a ship building business in Thorne which, by the turn of the 19th century was doing well, thanks to a government contract for a frigate. Steemson put his Thorne yard up for lease and moved to Paull in about 1805 after securing further contracts for the Navy. His Thorne yard was sold to Gilderson, Pearson & Co. From 1807 to 1812 Steemson had launched two more frigates – Proserpine and Owen Glendower, and three ships – Apollo, Anson and Atlas. It seems that Steemson was a man of vision – but perhaps with a propensity to over extend. With the end of the Napoleonic Wars, came a downturn in ship building. Steemson’s final project at Paull, the building of the Greenland whaler Brunswick in 1814, most likely led to his bankruptcy in 1819.

So who were the prisoners on this, the largest convict ship to arrive in Australian waters? The surgeon’s journal indicates that the Chatham Dockyard authorities declared the ship ready for boarding and from 1st September 1843, 200 prisoners from the hulk at Chatham embarked. Given the timeframe and place, this was probably York, a third-rate ship of the line that had been converted to a prison hulk in 1819.  Six of the Chatham men embarked were judged to be too sick to travel and were hospitalised at Spithead about a fortnight later. Anson then took on a further 306 prisoners from Portsmouth, giving a total complement of 500.

There were 25 convicts who had been sentenced at courts martial from around the globe: ten from New Brunswick, Nova Scotia and Newfoundland, Canada; others from Corfu, Gibraltar and Malta; four military prisoners were sentenced in Portsmouth. Of the civil prisoners, there were 152 tried in the Central Criminal Courts in London (the Old Bailey), two from Jersey Court Royale and the balance from counties all over England. Interestingly there seemed to be none from Ireland, Scotland or Wales. The prisoners were classified by ‘age, crimes and dispositions’.

One convict named John Millar (a former soldier) aged 36, was the only death on the voyage. He had a number of ailments, the most serious of which was epilepsy from which he had suffered 72 attacks on board ship. It is from this that he died on 30th January 1844.

In 1843 Anson was one of 16 convict ships arriving in Van Diemen’s Land from British ports – her only convict voyage. She carried such a large number of convicts that guards from a number of different regiments were tasked for the journey to Hobart. These were officers and men of the 51st, 58th and 96th and 99th. Seven soldiers attended Sick Bay during the voyage, but none were those of the 99th detachment.

Sergeant Graham William and eight privates of the 99th Regiment very soon after their arrival on Anson made haste to Sydney and arrived on Waterlily on 22nd February in order to join the majority of 99th troops garrisoned in Parramatta, NSW. Private John Naghton – one of the nine men from Anson – later made his way to Western Australia and took his Army discharge, with gratuity, and settled in the Colony.

The Master of Anson was Captain Coghlan, RN and Andrew Millar was the Surgeon Superintendent on the voyage.

The first stop in the long journey from the River Medway in Kent to the River Derwent in Hobart, was at Chatham on 1st September 1843. After the embarkation of 200 convict Anson sailed on and made Sheerness by the 6th, and then Spithead arriving on the 13th where six convicts were disembarked and hospitalised for existing health conditions. Next came Portsmouth where more convicts embarked, rounding out the number to 500. Anson arrived at Plymouth on the 19th where she anchored for the remainder of the month. She finally left Britain’s shores on 1st October. Her passage of 126 days was broken only at Rio de Janeiro, a respite of 14 days for the crew, and where water and fresh food was taken on board. She arrived in Hobart, Van Diemen’s Land on 4th February 1844. 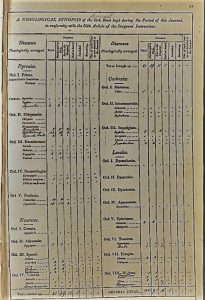 Andrew Millar achieved seniority in the Royal Navy on 31st July 1833. He graduated with his MD from University of Edinburgh in 1835. He served on HMS Carysford prior to his appointment as Surgeon Superintendent on HMS Anson. Carysford was a sixth-rate frigate, smaller than Anson, with a complement of men a quarter of his potential patients on Anson! In 1848, he was appointed Staff Surgeon at the Royal Infirmary, Plymouth and died in 1861 while in its employ. Millar maintained his journal from 7th July 1843 to 24th April 1844. His association with the ship almost three months prior to sailing can be explained by his interest in the fitting out of a ship of its size it was, after all,  Millar’s only voyage on a convict ship. The duration of his stay in Hobart after arrival was possibly to assist in the setting up of Anson for her next role.

The Nosological Synopsis in Millar’s journal (right) shows that there were 108 attendances to the Sick Bay: 91 discharged to duty; 16 sent to hospital upon arrival; one death. The cases were predominantly dysentery, bronchitis, syphilis and ophthalmia. Unusually, especially in such a large number of convicts, there were only two reports of scurvy. Surgeon Millar comments, I attribute the small amount of scorbatic symptoms to the ventilating system established on board. His journal [folio 33] gives an account of the plans for the ventilation system given to him by Dr. Neil Arnott of London, as well as the management of the system while on board.

On arrival in Hobart, Anson‘s rigging and other equipment was sold for £12,307. Anson would never again set sail. She was refitted (perhaps utilising the helpful plans prepared in July 1843) to become a ‘prison hulk’ of sorts and towed to Prince of Wales Bay, Risdon near Hobart. She was used to accommodate female convicts from 1844 to 1849 as a Probation Station. Once they had satisfactorily served six months probation they were hired into service as probation pass holders. 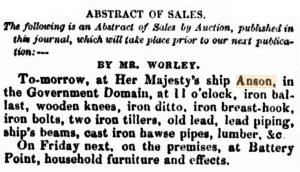 The advertisement (left) indicates that by January 1851 Anson was to be broken up. This was ultimately achieved after her materials, inside and out, were sold at auction in September 1851.