In 1755 the 51st Regiment of Foot was renumbered (from the 53rd). It received a county designation in 1782, as the 51st (2nd Yorkshire, West Riding) Regiment of Foot. In 1821 the regiment received royal status, becoming the 51st (2nd Yorkshire, West Riding, The King’s Own Light Infantry) Regiment.During the early 19th century the regiment served in the Napoleonic and Peninsular campaigns and served at Waterloo in 1815.

Thomas Swift was a long-serving soldier who intended to discharge from the Army with a Chelsea Pension. However, he died before he could realise his shilling a day. Because of problems with time and distance in army administrative matters, he was ‘admitted to pension’ with a formal examination planned, just eleven days AFTER his death. The same thing happened to his comrade in arms, Thomas Prendaville. In Prendaville’s case, his discharge to pension documents had already been drawn up (and are available to researchers) when he too died a week before his examination.

In Swift’s ‘examination’ document there is a check mark against service in ‘India East’, but this applies to every soldier on the page; it may have been written for something else entirely.

Upon arrival in Australia (1838) and throughout all the Pay Lists until he was discharged, Swift is paid 2d. per day ‘additional’ pay. This does not appear to relate to a Good Conduct Badge payment (although it is surprising that he did not receive a badge during his career). The genesis for this payment may be found in Pay Lists not available in Australia. 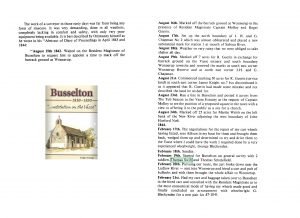 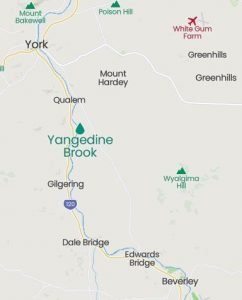 During Swift’s posting to Bunbury, he was assisting in surveying work for Henry Ommaney, the government surveyor in the area early in 1844 (see extract left).

After Swift was discharged in March 1847, he may have gone to work for a J T Smith on a farm at Yangedine Brook, or perhaps at the mill in the area [Geonoma Landgate]. Yangedine Brook is between York and Beverly – about six miles (ten kilometres) south of York on the Avon River (see map right). This speculation is based on the fact that Swift’s death was registered at ‘Yangerdin’.