Between August and December 1837, six convict ships left Britain with 51st Regiment guards on board bound for New South Wales and Van Diemen’s Land. The regiment continued to arrive in Australia as convict guards, and in larger numbers on troopships, during the decade that followed. Some of these ships are profiled on the Ships page. Arguably the most famous of the journeys made by 30 officers and men was on the ship Buffalo. That story can be read on the Anecdotes page.In June 1840, a detachment of 145 officers and men arrived in Western Australia on Runnymede from Hobart; a further 46 men arrived on Eudora and Champion between 1841 and 1844. Thirty three 51st men took their discharge and settled in Western Australia; one of them was this man featured on the right.

As a young man of 22 with less than two years Army service, it would have been a surprise to him to discover he would be at sea on his way from Quebec to Australia by the time of his next birthday. And after arriving in Hobart on the convict ship Buffalo, it would be less than four months before he set sail on Runnymede, another convict ship returning to England from Hobart, via the Swan River Colony arriving in June 1840; it was certainly an adventure.

During his time in the Colony, Richard Seaton spent 22 months, although not consecutively, at the military post on Rottnest Island. He would have served there during the period when depositions were taken before Charles Symmons, J.P in August 1846, at Rottnest, relative to certain charges of ill-treatment to the native prisoners, made against Mr. Henry Vincent, the Superintendent. Eight soldiers from the 51st Regiment, a native prisoner, a Fremantle gaoler and an interpreter gave depositions before a bench of magistrates. Seaton was not one of those deposed.

Just over nine years from his enlistment he chose to discharge from the Army. Perhaps he could envisage yet another long journey at sea ahead of him! Richard Seaton’s Army records are sparse. A number of details have been deduced from his enlistment record, but unfortunately this does not include his birthplace or year of birth. 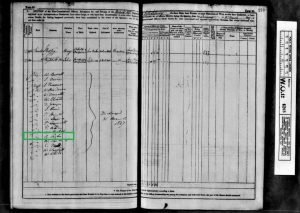 Similarly, details of the conditions of his discharge (along with 17 other privates of the 51st Regiment) are not available. Musters and Pay Lists have been checked for possible records from Hobart and Java, the regiment’s departing ship to India, from WO12-6208 folios 289-364; from Western Australia WO12-6208 folios 181-211; and from Chatham WO12-6209 folios 346-361. Just one record is sufficiently legible to show the names of the discharged men on 31st March 1847 (right).

The Commandant of Troops’ General Orders often show the conditions of discharge, if a discharge to pension is not relevant, i.e. by purchase, free, free with gratuity, etc. but the status of the privates discharged from the 51st Regiment was not recorded. No General Orders are extant from 27th June 1846 by Major & Commandant F C Irwin [WO28-266 folio 61] until 4th August 1847 by Brevet Major Robert Bush of the relieving 96th Regiment, confirmed by Lieutenant Colonel & Commandant F C Irwin [WO28-266 folio 66]. This may be because none was written or none survived.

Perhaps Seaton had been a butcher before he joined the Army, because shortly after discharge he advertised in the Inquirer newspaper his intention to start a butchering business. In September the same year a W J Gibbs announced that he and Seaton had commenced a business partnership in the butchering trade. This was a very short lived affair as both parties advertised the dissolution of their partnership in October the same year.

*The registered age at death (40 years) conflicts with Seaton’s age at enlistment in the Army records.