William Alexander Rummer was born and raised in Norfolk. On 25 Dec 1828 his mother Mary Rummer married James Greenacre, a policeman, some five years after William’s birth. His siblings are shown in English records as James (b.1829), John (b.1834), William (b.1836) and George (b.1840). William’s eldest brother (or half brother) arrived in Western Australia in 1863 on the ship Tartar, his wife and two children having died a few years previously.

William Rummer served in the Army less than nine years, all but 12 months of it in Australia, as can be seen in his profile. After receiving his conditional discharge in April 1849, he worked as a barman for Mr H L Cole, a butcher. He is recorded as appearing as a witness at the Quarter Sessions in a trial relating to a leg of mutton stolen from his employer! [Inquirer 27 Jun 1849].

William moved to Toodyay most likely after his official discharge came through in July 1851. While in Toodyay he commenced a hotelier’s business career after meeting Joseph York and Alexander Warren.

Joseph York had previously worked as a farm manager at Culham, about ten miles out of Toodyay. When his brother John acquired pastoral leases in the Gingin area, Joseph joined him for a few years then moved to Toodyay. Alexander Warren managed an inn named Bonnie Laddie but decided to move on; thus in February 1852 he re-named it The Toodyay Hotel and put it up for sale along with three town allotments R10, R24 and R25. All three lots had been granted by the end of January 1852 [Cromb:124, Perth Gazette 6 Feb 1852; WASRO Cons. 5000-537]. 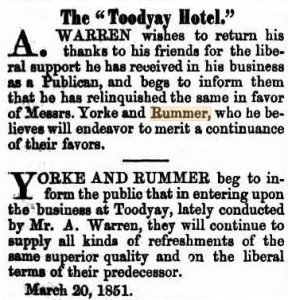 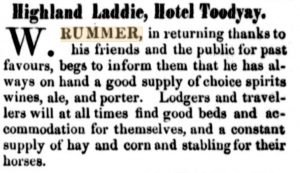 On 20 Mar 1852, Joseph York and William Rummer in partnership took up the lease of the Toodyay Hotel but within a year the partnership was dissolved [Perth Gazette 2 Apr 1852, 18 Apr 1853]. This left William as sole lessee and within six months he changed the name to Highland Laddie [Inquirer 26 Oct 1853]. 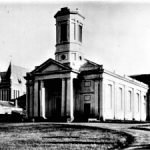 Meanwhile, in July 1852 William had married in St George’s Church close to the Army Barracks in Perth. His bride, Susan Trayhorn(e), was the daughter of a 96th Regiment colleague who had served with him in Launceston, Van Diemen’s Land. Richard Trayhorn left for India with the regiment, returned to England, and after discharge from the Army arrived in Western Australia as an enrolled pensioner guard on Hashemy with his family (including Susan). After the marriage William and Susan returned to Toodyay and the hotel business.

In December 1854 Rummer made application to the licensing authority to conduct business at the Guildford Hotel which, the following day, he leased from Jonathan James (J J) Jones [Perth Gazette 22 Dec 1854]. 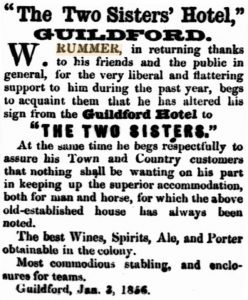 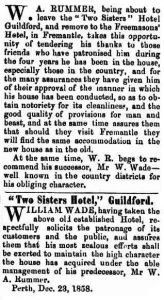 Just over 12 months later Rummer changed the name of the Guildford Hotel to The Two Sisters [Inquirer 23 Jan 1856]. Why would he do such a thing? He had no sisters of his own, although ‘the twins’ may have made some sense as his daughters Mary Ann and Katherine Rummer had been born in 1855. However, these two sisters were Rummer’s landlord J J Jones’s wife Elizabeth and her sister Caroline [Andrewartha wikitree]. The site of this hotel is uncertain, but Jones’s Guildford Hotel and thus the Two Sisters Hotel may have … stood in the Woodbridge Estate, on a site about three hundred yards east of the present East Guildford railway station [Hasluck:Early Days 1927]. Rummer sold the lease to William Wade in December 1858 and auctioned his stock on 12 Jan 1859 [Perth Gazette 31 Dec 1858; Perth Gazette 9 Jan 1859]. 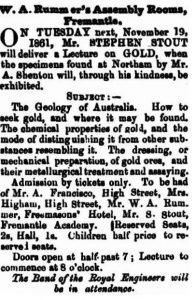 The longest term of William Rummer’s hospitality activities (by a small margin) would have been as licensee of the Freemasons Hotel in Fremantle. Although he took over the lease from N Paterson in February 1859, he seems not to have started operating until September that year [Inquirer 16 Feb 1859; Perth Gazette 23 Sep 1859]. This venture seems to have allowed him to branch out in other business activities and gain influence in the community. While at the Fremantle Hotel, he hosted meetings and lecturers, often at ‘WA Rummer’s Assembly Rooms’ (left); whether these rooms were part of the hotel or some other venue is not clear [Perth Gazette 15 Nov 1861]. 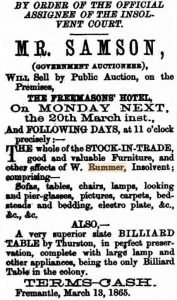 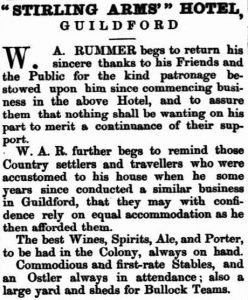 In 1865, much newspaper space was given to advertisements relating to William Alfred Rummer’s insolvency. This most definitely alluded to William Alexander as there is a government file on the topic [WASRO Cons 3429-47] and an auction of his stock in trade at the Freemasons‘ by the government auctioneers on 20 Mar 1865 [Perth Gazette 17 Mar 1865].

Rummer’s insolvency must have been resolved, because he was back in Guildford managing the Stirling Arms Hotel in October 1865 [Inquirer 25 Oct 1865]. This business continued until January 1870 when the licence was taken up by H P Lyons [Express Fremantle 6 Jan 1870]. He was apparently not entirely ‘down and out’ in the hotel business after relinquishing his lease at the Stirling Arms. In 1847 he applied for a general publican’s licence in Fremantle but was refused [Inquirer 9 Sep 1874]. 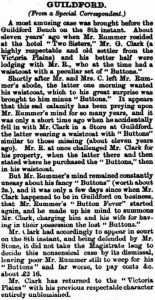 Commencing with his appearance as a witness about the leg of mutton above, Rummer was a frequent visitor to the Courts. In his position as a publican, there is no doubt he ran into some interesting situations. He can be found in the Magistrates Court, Criminal Court, Civil Court, Quarter Sessions and Supreme Court as witness, juryman, plaintiff and as administrator of an estate. He stepped into his own limelight as an insolvent, and a plaintiff in the extraordinary case of ‘the buttons’ (left) [Perth Gazette 12 Apr 1867]. Furthermore, he was listed in the Jurors Book for 1860 [Legislation: 23rd Vict., No. 13] his eligibility for which required a personal estate [assets] of £150. One of his appearances was in the Supreme Court on 4 Jul 1861, a case brought against John Templeton for stealing. Newspaper reports can be found for the intrepid researcher for his many Court appearances.

William Rummer has been cited as a ‘Lt. in the Militia at Fremantle’. I have examined records extant for the Fremantle Volunteer Rifle Volunteers (raised in September 1861) and have not found him mentioned. The only reference I can find to William Rummer is that he hosted many of its meetings at the Freemasons Hotel ... that the thanks of this meeting are due to Mr Rummer for the use of his room, not only on the present occasion, but on all other public occasions, when he has so kindly, without any charge whatever, placed the room at our disposal [Inquirer 18 Sep 1861]. 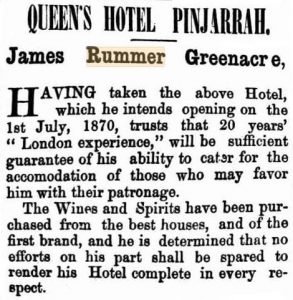 As it happens I found mention of William’s brother in the Pinjarrah Mounted Volunteers as Trooper John [sic] Rummer Greenacre enlisting in December 1870 and last noted in May 1882. This makes sense as James took over the Queens Hotel in Pinjarrah on 1 Jan 1870 [The Herald 25 Jun 1870]. I was a little doubtful about … trusts that 20 years London experience will be sufficient guarantee of his ability to cater … However, he was licensee of the Hoop and Grapes in Bishopsgate, East London from October 1860 to January 1862 [1861 Census of England & Wales; pubwiki.co.uk].

Rummer has been mentioned as an employer of ticket of leave men throughout the 1860s and 1870s. These instances can be verified in convict records at the State Records Office, the Australian Joint Copy Project or online at ancestry.com.au.

I have not verified the claim that Rummer purchased five acres in the Avon District in 1857 while publican at Toodyay [Erickson:2700]. I have no reason to refute this except that he had left the hotel in Toodyay at the end of 1854 to take up the licence of the Guildford Hotel/Two Sisters which he was managing in 1857. 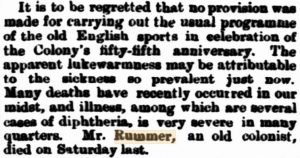 Without a certificate of death or a verifiable source reference, I can only fortify the cause of Rummer’s death as cancer of the throat [Erickson:2700] by citing a visit by Reverend D G Watkins, Fremantle with relief to a man named Rummer suffering from Cancer [WASRO Cons 527-1884-2047]. However, food for thought is the report (left) of a diphtheria outbreak at the time of Rummer’s death [Inquirer 4 Jun 1884]. Not much of an obituary for such a colourful man, is it?

I would like to thank Alison Cromb for gifting me her book The Road to Toodyay which was of so much assistance; Beth Frayne from the Toodyay Historical Society for rallying the members to search for additional information; Garry Gillard (Fremantle Stuff website) for his help on the background of the pubs in this article as well as the quotes from Hasluck in Early Days Volume 1; John Andrewartha for the references from his family tree and his continuing interest in my work. Private Rummer has been a pleasure.