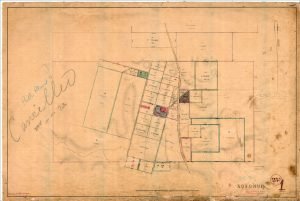 An intrepid researcher will need to clarify Nathaniel Newstead’s land holdings and the execution of his estate. The plan at left has no original drafting date on it, nor specific dates to identify when amendments were made. However, the plan makes perfect sense of the advertisement placed by the Land Titles Office in January 1911 regarding the Transfer of Land Application made by Newstead’s step-daughter Mary Elizabeth Bagg nearly 14 years after his death. His other step-daughter, Eliza Catherine (Mrs Krakouer), died in 1894.The Application does not cover the ten acres of enrolled pensioner force land referred to as P9 on the plan. This was not granted to Newstead directly, but assigned to him after his marriage to ‘Mary’ Robinson, née Cody, the widow of an enrolled pensioner guard who had resided in Kojonup prior to his death in 1859. The Lot was assigned to Newstead in 1862. He applied for and received full title to P9 on 14 July 1879 – Title No. 2991. 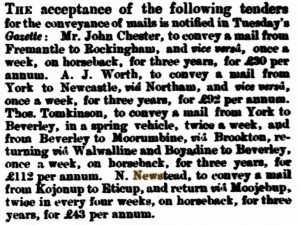 From the early 1850s, Newstead was tendering for mail delivery contracts from Kojonup. The successful contractors were advertised in the newspapers. One of his early contracts was for delivery from Kojonup to Albany at $8 pounds per trip (monthly). He was still delivering mail on horseback at the age of 60 plus from Kojonup to Eticup. See advertisement (left).


Witness for the Prosecution
In January 1851 Nathaniel Newstead by an act of kindness in return for a drink at the pub, inadvertently assisted in a crime. He was in the Magistrate’s Court and then Quarter Sessions 2nd to 3rd April 1851 to explain his side of the story. Click here to read about the robbery of a chest of tea and a bag of sugar and Newstead’s part in it.

In February 1855 Newstead was merely doing his job as a carrier from Albany back to Kojonup when he was asked by William Burrell, Gaoler at Albany to take a passenger. He had to hand the prisoner over to the Kojonup to Perth carrier to continue the journey to the Perth Hospital where the prisoner was to receive treatment. The story continues with a cast of characters of whom I have already profiled: William Burrell (above), David Granger and Constable Mooney – soldiers formerly of the 51st and 21st Regiments serving in the Colony. Read the story here.

In August 1885 a Supreme Court Criminal Sitting was considering an incident which took place the previous June. It concerned the shooting of a sailor named Rhodber by an Albany storekeeper named Abraham Krakouer. Newstead has a non-speaking part in the murder trial – mentioned only in passing. However, his involvement was of a personal nature – the accused Krakouer was his son-in-law, the husband of Eliza Catherine, Newstead’s step-daughter. One of the witnesses at the trial was Newstead’s other son-in-law, Samuel Bagg. In fact Bagg and Newstead appeared to be together drinking in the Weld Arms. The entire plot is about men, drink and guns. Read the story here. 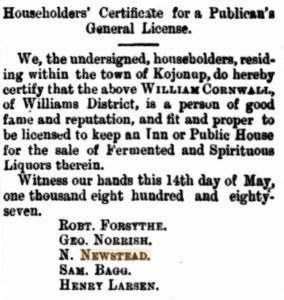 In the last decade of his life, Newstead made a point of putting forward his name as a ‘Householder’ in order that a Kojonup Householders Certificate could be issued to those applying for an Inn or Publican’s Licence. Some of those he certified to be ‘fit and proper’ to hold a licence were William Cornwall, Thomas Godriche Palmer, William House, and William Thomas Jones.