George Innes was shown in many records throughout his army career in Australia as INNIS. In seeking his record of birth and/or baptism in Fife, I found him in many sources recorded as George Innes born 12 Sep and baptised 23 Sep 1821 in Kingsbarns, Fife, son of Alexander Innes and Ann Dougal.  I can categorically state that this is not Private George Innes/Innis, the subject of this profile. George Innes born in 1821 was a seaman who attained his Mate’s Certificate of Service after 16 years in the British Merchant Service Coasting and Foreign Trade. I have the document to prove it [Ticket No. 170.966].

Twelve months prior to arriving in Western Australia, George Innes was on detachment with his regiment in Port Phillip, NSW.  Within just over two years it would be part of the new Colony of Victoria.  George then embarked on 18 Sep 1848 on a ship to Adelaide, landing on 8 Oct 1848.  He spent almost five months in Adelaide before embarking on Ratcliffe, 4 Mar 1849. After 28 days on board, he arrived in Western Australia with 107 officers and men of his regiment. Eighteen men from 96th Regiment either transferred or attached to the 99th awaiting discharge. A few arrived later from the regiment in eastern Australia, bringing up the complement of the 99th Regiment in the Colony to 129 men.

Sometime after his discharge from the Army in 1852, George went back to Victoria – by which time gold fever had enveloped the Colony.  George tried his luck in the goldfields for a time, before making his way back to Adelaide, the city in which he had served four years earlier.

George Innes was a success story – a rank and file soldier who served his ‘old country’ well, and made a large contribution to the new country of his choosing.  There is much more to George Innes than this profile and this can be found in an article by Chief Superintendent W B Budd Q.P.M. of the South Australian Police which appeared in the October to December edition, 1985 pp.122-124 of the Australian Police Journal. 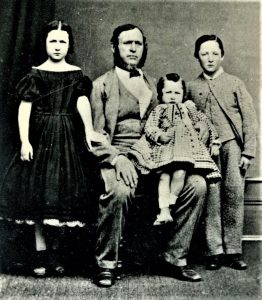 Acknowledgements
Robert Innes, great-great-grandson of George Innes, who has done a great deal of research for which I am grateful to have shared.
Donna Hargreaves, Australian Police Journal, who very promptly sent me a copy of the journal article referenced here.
Chris Ward, who once again enthusiastically assisted in identifying burial locations in West Terrace Cemetery, South Australia.
And finally, I would like to thank the Innes family member who kindly contributed the photograph (right) to this website.