Local History Claims
In his book ‘The Williams’, H G Cowin writes: Following the advice of his brothers, David and John Grainger, who a few years previously had arrived in the Colony, Henry Grainger of the 23rd Fusiliers, decided to migrate. The three brothers had fought together at the Crimean War and the Indian Mutiny and wished again to be near each other. Given the incorrect statement that David Grainger had fought in the Crimean War and Indian Mutiny we must wonder how the author connected David with a John or Henry Grainger.The only John Grainger we can identify in the Colony concurrent during David’s time of arrival and settlement, is a man whom, according to various sources, was born between 1802 and 1807 in Sussex, and was a servant to Captain Thomas Bannister when they arrived on board the Atwick (1829); this John Grainger later purchased a Town Lot and lived in Fremantle. This version of the three brothers has been picked up by newspaper articles and the State Heritage Council.The Reality
In reality David Grainger joined the 90th Regiment and six months later transferred to the 51st Regiment. There were three privates in the 51st that made their way to Van Diemen’s Land from England: David, James and William Grainger. It is possible that David’s rapid transfer to the 51st is because he had a brother (or cousin) serving in that regiment. All three Grainger privates all came to the Swan River Colony between 1840 and 1844 with the 51st detachment. James and William Grainger left the Colony for Calcutta, India in 1847. William’s ultimate fate is unknown, but James left the Army with a special (invalid) pension under Royal Warrant in 1848, which he collected in London, followed by Tasmania and Melbourne until at least 1860. Meanwhile, Henry Grainger enlisted in the 23rd Fusiliers and discharged from the Army in 1860 (probably while still serving in India) after service in the Crimean War and Indian Mutiny. He arrived in Western Australia shortly thereafter.The Streatley, Berkshire Connection
The three Grainger Redcoats are connected through their common birth place: Streatley, Berkshire: James (1809), David (1816), Henry (1821). There may have been other military men in the family but if the family was baptised at St Mary’s Church, Streatly the records are not extant online. The village of Streatley can be found in records as Streatly and Straitley. 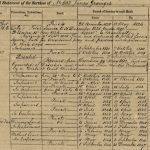 While David and Henry seem to have been model soldiers and industrious settlers with unblemished records, James’s Army record (seen left) is a litany of bad behaviour. He was 16 when he joined the Army and during his 23 years in uniform earned no accumulation of days for a service pension owing to his constant periods of confinement. His record includes at least five District Courts Martial in Portsmouth, Chester, Dublin, Kilkenny and Hobart Town, the charges almost always for desertion and/or drunkenness. However. he seems to have behaved himself while in the Swan River Colony.

David Grainger on Board Minerva
David’s voyage from England to Van Diemen’s Land included two days off duty on the sick list. He was listed in the Sick Book from 18th to 20th July with Haemoptysis and then released as ‘cured’. Haemoptysis is described in modern medical dictionaries as the coughing up of blood or blood-stained mucus from the bronchi, larynx, trachea, or lungs. In other words, it is the airway bleeding. This can occur with lung cancer, infections such as tuberculosis, bronchitis, or pneumonia, and certain cardiovascular conditions.

Private 402 William Grainger left England the following year, embarking on the convict ship Waverley in January 1839 which picked up 176 prisoners in Dublin and transported them to New South Wales, arriving at Port Jackson on 17th June, and ultimately Van Diemens Land, the Swan River Colony and India.

Skinning and Tanning at the Spring
David Grainger is mentioned at Stanton/Staunton Spring in the the Wollaston Diaries; John Ramsden Wollaston was the first Church of England Archdeacon in the Colony and travelled extensively throughout his territory. The most commanding spot I have ever seen, and abounding with game. I bought a quantity of skins (opossum) ready tanned of Granger [sic] at Stanton Spring to send to England. A solitary discharged soldier, living among natives, hunting and tanning, and making a good thing out of it. Two V huts -one for himself – and another for his skins [p. 134]. I have only to add I returned ‘Dobbin’ after a couple of days rest and got back my ponies safe and uninjured. They had stopped where I thought they would – at Stanton Springs – where Granger tethered his horses by the roadside. 101 miles from Cojonup, so the foolish beasts had travelled 202 miles further than they need have done [p.136]. Grainger had acquired land at Avon Loc 81, Staunton Spring in 1851.