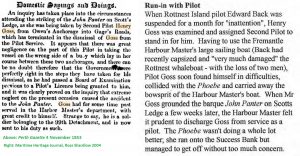 Henry Goss became an almost full-time fixture on the Rottnest Island Military Post from the date he transferred from the 96th to the 99th detachment in June 1849. He had been on a list for discharge while serving with the 96th (see left sidebar), but found that he could wait out his time in a pleasant location and at the same time engage in a bit of ‘moonlighting’. He finally discharged from the Army on 31st December 1854, with the threat of service in India far behind him.

Goss was born in Dock, an area of Stoke Damerel near Plymouth, Devon. One might think that he had seafaring in his blood, but his father’s occupation in Dock was that of Warder. Stoke Damerel was incorporated under a local Act of Parliament to manage its own poor law administration from the 1700s, and it is possible that Goss Senior was employed in its Poor House. Nonetheless, Henry chose a career at sea even before his discharge from the Army. In 1853, he was granted a Pilot’s Licence for the Port of Fremantle.

There followed some adverse publicity: In September and November 1853, the very inexperienced Henry was involved in incidents with the convict ship Phoebe Dunbar and John Panter respectively (see sidebar). However, Henry’s reputation was vindicated by his heroic action in a mere dingy, as follows:
“Last week an accident occurred to the pilot boat off Rottnest, which might have been attended with most serious, if not fatal, consequences, but for the very timely assistance which was rendered by Henry Goss, late private of the 99th detachment, who happened to be on the lsland at the time. After the pilot had brought in the American whaler ‘Bragansa’ to her anchorage on Friday the 5th instant, on making his way back to Rottnest Island, he ran his boat against the rock known as “Fisherman’s Rock.” The consequence was that one of the planks was stove in, and the whole of the boat’s crew were in imminent danger. While on the rock they made signals of distress, which were seen from Rottnest Island by the crew of a cargo boat lying there, who were unable to render any assistance. Henry Goss in a small dingy, and at great personal risk, put out and soon had the satisfaction of seeing the pilot again upon the Island.” [Inquirer 17 Jan 1855].

It appears that the Head Pilot, Edward Back (based on Rottnest Island from 1848), was not an intrepid pilot himself and in 1855 a newspaper reporter received some suspect intelligence that Back would soon be dismissed from the service, “… we are informed that this officer has frequently been taken to task for his manner of discharging his very important duties, a repetition of which he had been told, would probably lead to his removal from his appointment. Henry Goss, lately discharged from the 99th Regiment, has been appointed to succeed Mr Back.” [Inquirer 31 Jan 1855]. In fact Back prevailed and remained in his official position as Port Pilot until 1857.

Goss’s transfer to the Military Post on Rottnest Island  would have coincided with the completion in 1849 of the first stone lighthouse built to provide a safer sailing passage for ships to Fremantle Port and the Swan River Colony. The photograph (see left) was taken at the opening of the second lighthouse in 1896 and shows the original, much smaller model, in the background. The original was demolished soon after.

After another unfortunate incident involving the convict ship, Stag, Goss gave up his aspiration of becoming the lead pilot. He, the Harbour Master James Harding, and Pilot Edward Back all fared badly in the press: “I hope that the voice of the Chamber of Commerce will now be heard in this matter, … the necessity of the Government in engaging good and efficient men as Pilots.” [Argus of Inquirer 30 May 1855].

Henry Goss then turned his hand to becoming ‘Master’ of a number of small schooners and cutters working coastal cargo routes from Fremantle to Port Gregory in the north, and to King George’s Sound in the south. Some of these were:

The last reference I have found of Henry’s seagoing escapades was as Master of Arabian. Goss was charged with stealing six bottles of gin from a consignment he shipped to Arthur Lewis, a publican in Bunbury, in mid-October 1867. The trial took place in the Supreme Court before Chief Justice Burt on 2nd January 1868. A verdict of not guilty was brought in after the appearance of many witnesses (see Perth Gazette 3 Jan 1868). The verdict was not a popular one and letters to the newspapers followed.

Goss died three years later and was buried in East Perth Cemetery’s Church of England section. His registration of death was recorded in the same manner as his baptismal record: Henry James Huxtable Goss. I have never found a record of marriage or children for this man, who was the last soldier on duty at Rottnest Island Military Post.

An enigmatic newspaper item appeared during September 1867 relating to the sighting of a cairn in the Abrolhos near ‘Goss Monument’, when several ships, including Albert, were searching for a wreck. I have not been able to discover for whom the monument was named, but it appears that an explorer W P C Thomson was on board and mentioned it in his journal in 1867 (see left).