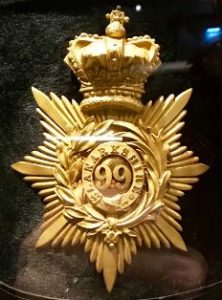 From 1761 to 1818, five regiments of foot with the numeral 99 had been raised and disbanded. A sixth was raised in 1824 in Glasgow which in 1832, while serving in Mauritius and Seychelles, was formally granted its name 99th (Lanarkshire) Regiment. In 1874, it became 99th (Duke of Edinburgh’s) Regiment.

The 99th was stationed in Ireland for five years, before being detailed to escort convicts to Australia in 1842. It remained in Australia until 1856, but also sent two companies to New Zealand during the Flagstaff War (or First Māori War) in 1845-46.

In 1849 a Company of the 99th arrived in Western Australia, and in 1856 joined with the regiment from Hobart to return to England. When it sailed for home, over 400 of its men stayed behind in Australia to transfer to other units.

This soldier is difficult to identify in records because of the variants in the spelling of his surname. This is particularly so in his death and burial records.

He is recorded in the Surgeon Superintendent’s Journal on board John Renwick; in the Sick Book and Case No. 2 (as Fattis) where the treatment of catarrh is described from 16 Nov to 2 Dec 1842 after which he is returned to duty [ADM101-39-4 folio 4]. 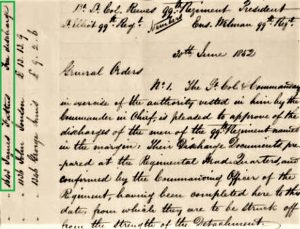 His involvement (as Fattus) in an accidental shooting while employed as a Warder Overseer in a convict road party is reported in the Inquirer, Wednesday 23 February 1853, page 2.
A fearful accident occurred on Monday at the Canning. It appears that at half-past 6 a.m., the men belonging to the road-party were about to proceed to work, when the overseer, formerly a soldier of the 99th Regiment [James Fattus], but who had obtained his discharge, went to the stand of arms in the hut to procure his musket, and, in pulling it out, the hammer, which was down on the nipple, instead of being half cock, caught in the fold of a great coat placed over the arms to preserve them from the damp, caused it to descend upon the cap and discharged the piece, the contents entering the neck of a soldier of the 99th Regiment [Private George Phillips], who was taking his breakfast outside the tent, and causing instantaneous death. The Assistant Police Magistrate, Mr. Symmonds, proceeded to the spot early in the day to investigate the matter. Colonel Reeves also attended to watch the proceedings.