Four line infantry regiments with the numeral 96 were raised and disbanded between 1761 and 1818.A fifth 96th was raised in February 1824 at Salford Barracks, Manchester. It was later allowed to carry the battle honours awarded its predecessor – Peninsular, Egypt and the Sphinx.

The character reference given by Major Robert Bush, Dreury’s 96th Regiment commanding officer, was probably genuine.  The evidence against Dreury at his felony trial on 6 Jan 1848 was not wholly convincing; everyone was under the influence of alcohol, it seems.  Dreury’s early release from his imprisonment was organised by a fellow soldier – Commandant of Troops, Lieutenant Colonel Frederick C Irwin, while in the position of de facto governor. [WO28-266-85].  It is interesting that Bush commented on Dreury’s ‘court martial-free status’ at this time, as this was about to change. 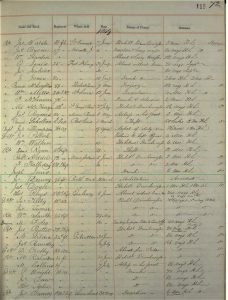 On 13th March 1849, Dreury faced a Garrison Court Martial which was described as an ‘accident’; no sentence and no stoppages for this incident were described.  Errington did not have a record of Dreury being imprisoned in the Fremantle Gaol (Round House) and there were no comments in the newspapers in the relevant timeframe.  Nonetheless, the explanation can be found in the document  ‘Examination of Invalid Soldiers’ dated 9th October 1849 [WO23-150].  Dreury suffered a gunshot wound when firing at a tribute for H.M. birthday. It seems too obvious to suggest that March is not a month associated with the sovereign’s birthday (24th May). Supposition: Was this an Army cover-up for the fact that the wound was self-inflicted and Dreury wanted to ensure he stayed in the Colony and not sail to India with the regiment.  He was a man in his 20s, perhaps without any reason to discharge from the Army after only nine years’ service.  Perhaps the gunshot wound to his right hand guaranteed a discharge.  However, a court martial was held as a firearm had been discharged; the Army inflicted no punishment; the newspapers did not report the incident; Dreury’s service papers were ‘lost’; no pension was paid; but Dreury did not go to India!
Final Discharge 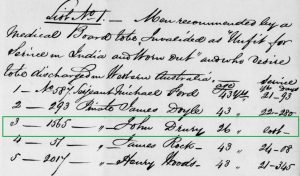 In General Orders dated 14th May 1849, Dreury was one of three soldiers whose service records were ‘lost’ [WO28-266-101].
In General Orders dated 25th August 1851, all three 96th Regiment soldiers – John Boag, John Drury, and John Sale, were finally granted their discharges, albeit at that time they were ‘attached’ (not transferred) to the 99th Regiment detachment in Perth.  It was confirmed that pay had been issued to 31st August 1851 but would cease from that date; they would be struck off; and receive their Parchment Certificates of discharge [WO28-266-135]. In the event, John Boag’s service records were ‘found’ and he received a pension. Dreury and Sale appear not to have been so fortunate. All were recorded as ‘non-effective’ in the Pay List of 99th Regiment for the quarter July to September 1851 [WO12-9817-50].