Four line infantry regiments with the numeral 96 were raised and disbanded between 1761 and 1818.

A fifth 96th was raised in February 1824 at Salford Barracks, Manchester. It was later allowed to carry the battle honours awarded its predecessor – Peninsular, Egypt and the Sphinx. 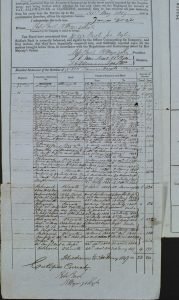 James Doyle has just about the worst military service record of any soldier I have encountered.  He seems to have been a career prisoner.  His record will speak for itself – if you can read it; my apologies for the image at left, the best I could do [WO97-1039-45 folio 3]. It seems, however, that he managed to keep his nose clean until two days prior to his discharge; celebrating perhaps?  His farewell to the Army meant hard labour, solitary confinement and no beer! [WO86-6-119].

Mr Doyle in civilian life was no less a problem – to the researcher, at least.  He received his pension in Perth until 30th June 1857.  Sometime after October that year he made his way to Adelaide where he is listed resident until the end of June 1858.  At that point there is no record of him receiving his pension – although his name appears on the pension returns.  There are notes on the last page of his discharge documents shown below.  I have – on previous occasions tried to work out the War Office reference numbers for what is obviously correspondence and/or forms – but to no avail.  It would appear the War Office was looking for him, as am I.  A contact in South Australia reports that the name James Doyle is recorded in the Police Gazettes on five occasions. I would not be surprised. We may, when the Gazettes for this era come online, catch up with him as the police seem to have done!