Quarterly Pay Lists WO12-9624 for the period Quarter 1st April to 30th June 1849 are not available in Western Australia, thus it is not posssible to identify exactly which men received approval in Perth for their discharge. Most are recorded in the Commandant’s General Orders in WO28-266 in April or May with a conditional discharge, and ten received a pension. But three men who did eventually settle in the Colony: John Bowra, Thomas Briggs and William King are not mentioned.

In the case of Briggs, it appears that he sailed on Radcliffe with his regiment to India in May 1849; the proof of this was the death and births of three children in India. The regiment remained in India until it returned to England in 1855; it did not return to Australia.  Thomas Briggs was in Lahore with the regiment in the first quarter of 1851. By 1853/54 the family was back in Perth where another child was born and Briggs took over the licence of the Trumpeters Arms public house in King William Street, Perth and relinquished it by May 1854 (see sidebar). 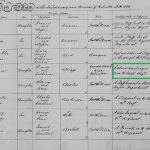 It is possible, but at this stage not proven, that Briggs received a conditional discharge in April or May 1849 and chose to continue with his regiment until approval from London was available; for most of the 96th settlers this was in July or August 1851. The words on daughter Catherine Briggs’ birth/baptism certificate (right) may indicate that this could be the case.

Thomas Briggs’ first foray into the hotel business occurred after he and the family returned from India – as mentioned above – when he ran the Trumpeters Arms.  Briggs then established the Halfway House on the Perth-Fremantle road on the site of the present Albion Hotel in Stirling Highway, Cottesloe.  It superseded the Bush Inn, the first half-way public house between Perth and Fremantle, a hostelry run by John Butler in the 1830s as the first licenced wayside inn in the Colony.  Briggs’ wife, Catherine, would have been an asset as she had experience in business from her previous marriage.  She and Edward Tanning ran a bakery which she continued after Tanning’s death until her marriage to Briggs and departure to India. [TUCK & ERIC]. 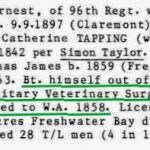 I have found nothing to verify the claim that Thomas Briggs left his business interests and responsibility for his large family in the Colony to dash off to the Indian Mutiny in 1857 [ERIC p.310]. Only one man named Thomas Briggs can be found among those who were awarded the Indian Mutiny Medal; he was a Private with the 2nd Battalion of the 60th (King’s Royal Rifle Corps) Regiment of Foot [WO100-38-4].