Quarterly Pay Lists WO12-9624 for the period Quarter 1st April to 30th June 1849 are not available in Western Australia, thus it is not posssible to identify exactly which men received approval in Perth for their discharge. Most are recorded in the Commandant’s General Orders in WO28-266 in April or May with a conditional discharge, and ten received a pension. But three men who did eventually settle in the Colony: John Bowra, Thomas Briggs and William King are not mentioned. 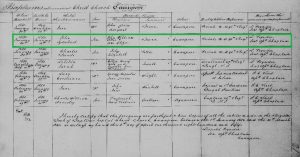 In the case of Bowra, it appears that he sailed on Radcliffe with his regiment to India in May 1849; the proof of this was the birth of his eldest son in Cawnpore in January 1850 [click to enlarge image on left].  The regiment remained in India until it returned to England in 1855. It did not return to Tasmania as mentioned in at least one newspaper account of Bowra’s Army career.  He was not in Lahore with the regiment in the first quarter of 1851 and by 1852 the family was in Hobart where their second child, a daughter, was born.  Bowra returned to Perth by 1854 where he was conducting business as a repairer of watches and their third child was born.

It is possible, but at this stage not proven, that Bowra received a conditional discharge in April or May 1849 and chose to continue with his regiment until approval from London was available; for most of the 96th settlers this was in July or August 1851.  He then decided to return to Hobart and within a few years, to Perth. Whether he purchased his discharge, received it free or was paid a gratuity is unknown [Diane Oldman Jun 2020].