Following his enlistment, Thomas Allmond spent around 18 months ‘at home’ – the regiment was stationed in Ireland. The first detachments of the 99th Regiment arrived in Australia with transported convicts aboard the transport ship North Briton, destined for Van Diemen’s Land (Tasmania), in 1842. The rest of the 99th arrived with successive shipments of convicts, Allmond and two other ‘settlers’ arrived on Asiatic in 1843, first serving in NSW.

99th Regiment troops were dispatched to New Zealand to take part in the New Zealand Wars. Detachments of the 99th took part in the Hutt Valley Campaign, seeing action at Battle Hill. Following the capture of Te Rauparaha in 1846, the Regiment left New Zealand and returned to Australia, although detachments would be sent as needed to reinforce the British forces in New Zealand for the next few years to keep the peace. For its service in the First Maori War, the regiment earned its first battle honour: New Zealand.

During this approximately five year period of his Army career, before the 99th detachment arrived in Western Australia (April 1849), Allmond had two promotions: from Private to Corporal in 1845 and Corporal to Sergeant in 1848. 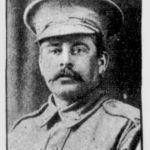 Once in WA, Allmond took no time at all finding a bride. Within six months of arrival he married Emma Matilda Leeder whose family settled in WA on one of the early Swan River Colony’s migrant ships – Rockingham (1830). They had nine children, all but one born in Perth. Early tragedy befell two of the children: Emma Elizabeth who was only six years old when her clothes caught on fire; William Leeder who was only ten months old when he died. Arthur William, the son born in England, died in WWI. He was almost 44 years old when he enlisted in the 50th Bn. AIF and died in September 1917. [Left: Arthur William Allmond 1853-1917],

In late 1851, a vacancy arose for the position of Commandant’s Clerk. Colonel Frederick C Irwin, Commandant (and later a Governor in WA), recommended him for the position and he started work on 1 Nov 1851; his Army transfer did not officially take effect until 1 Feb 1852. Captain John Bruce, Staff Officer of the Enrolled Pensioner Force succeded Irwin as Commandant in November 1854 and Allmond would work for him for sixteen years.

In October 1855 Allmond was mentioned at the Quarter Sessions when a female servant was charged with stealing sundry items from him (and possibly the family). Ellen Holder was found guilty, but thanks to a former employer giving her a good character reference, she received mercy on the recommendation of the Prosecutor and was gaoled for just one month.

Emma Allmond was the first teacher at the Pensioner Barracks School, part of the complex at the western end of St George’s Terrace, when it was completed in 1866. Her salary was £25 per annum; this was five pounds a year more than generally received by female teachers in the Colony at that time. There had been 90 children admitted into the school initially and 87 enrolled by June 1867, 67 of whom were under seven years old! From her husband’s pension documents a notation suggests she may have been teaching in a school in Newcastle-upon-Tyne when they moved to England.

And that brings us to their departure from Western Australia. Allmond applied for his discharge from the Army on 27 Jan 1871. In his work with the Commandants he, of all people, would have known how long it would be before his discharge to pension was processed through the War Office machine. He also assumed he would receive a permanent pension without difficulty and in the meantime would be free to make his own life choices. He was nearly 54 years old and had been in the Army for almost 29 years. He, Emma, five children and the infant Bertha Mary, left for London on Hastings as steerage passengers on 30 Jan 1871.

While awaiting his final discharge – which was issued on 13 Jun 1871 – he served for a time with another regiment. He is recorded in the first quarter Musters of 1851 at the London Recruiting Depot of the 4th (Royal Irish) Dragoon Guards. His pension payment in East London confirms his whereabouts until 1 Oct 1871 where he can be found in Newcastle. The family moved again in 1873 to Sunderland, County Durham, where Arthur William’s birth was registered.

No other records of the family can be found until they boarded the ship Atma from London to Port Adelaide – Thomas, Emma and four of their children, James, Walter, Bertha and Arthur. On this voyage they were saloon class passengers. This was the ship’s maiden voyage which left London on 13 Jun and arrived in Port Adelaide on 1 Oct 1879.

No particular reason for the family’s return to Australia is recorded … nor why they returned to South Australia, rather than Western Australia. Perhaps they had simply decided to return to Australia when Thomas retired. It is clear from an appearance in the Adelaide Local Court that the Allmonds purchased land and arranged for a house to be built in Murray Park, Magill.