Joseph Somes (born 1787, Stepney, London) began his maritime career as an apprenticed lighterman to his father Samuel, a ship owner, and at age 21 Joseph was captain of one of his father’s ships. In 1818, after his father’s death, he and his elder brother took over an already prosperous business which included sailmaking, a chandler business and chartering for the East India Company; later, after the EIC broke up its fleet, Joseph acquired a number of its ships. He became sole owner of the company and by 1830 was the largest ship owner in Britain. By the time of his death in 1845, he was the owner of up to forty ships making him one of the largest private ship owners in the world. In 1844 he became Member of Parliament for Dartmouth. He had been one of the founders of Lloyds Register of Shipping (1834), and chartered ships to the government for the transport of convicts, troops and cargo to India, Australasia, Africa and The Americas. He left a personal wealth of about £434,000.

Layton was a 513 ton Barque built in Lancaster in 1813 and registered in London. She sailed as a convict transport on a total of five voyages: to Van Diemen’s Land in 1827, 1835, 1839 and 1841, and to New South Wales in 1829. Nothing else is known about her builders or her specifications at the current time. The Lancashire Maritime Museum and the Lancashire County Council Archives have been contacted for further information.

On board were 260 male convicts, four of whom died on the voyage. Out of these ‘passengers’, the average sentence was 12 years, including 54 ‘Lifers’. There were 34 military convicts on board who had been courts martialled in locations such as Upper and Lower Canada, Demerara (later British Guiana), Malta, Corfu, Glasgow, Edinburgh and London. The four deaths were from Phthisis (Tuberculosis), Diarrhea and two from Dysentery.

The Ship’s Surgeon gives a good accounting of the start of the voyage, detailing in his ‘General Remarks’ the problems that assailed the ship, as does the newspaper report. 120 convicts boarded on 26th June at Woolwich – taken off the hulks in the Thames. Then 143 convicts boarded on 13th July at Portsmouth – three of the total were hospitalised and did not sail. Layton left Portsmouth the same day but had to put in at Plymouth on 15th July for repairs. She eventually said goodbye to England on 26th July at Plymouth and called at Teneriffe for supplies on 13th August. She arrived at the River Derwent, VDL on 7th December 1839 after 147 days at sea since leaving London. 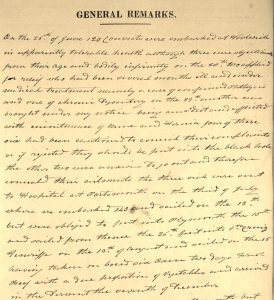 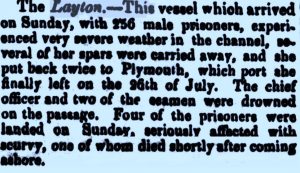