The main objective of this website is to profile men of the Military Establishment in Western Australia who discharged from the Army to settle in WA. A list of those who died while in military service is one of a number of secondary objectives . John Dalton of the 21st and 51st Regiment detachments belongs in the latter group. I am presenting this Anecdote about him, because he planned to settle here and died while still in military service possibly only seven months short of what he anticipated would be his discharge date; all dreams of settlement gone. One newspaper’s comment, “He was a man much liked by his comrades, and bore an excellent character.”

John Dalton was born in Church Town, County Westmeath c. 1809. He enlisted in the 21st Regiment of Foot on 19th May 1830, Private #715, at that time the regiment was known as the Royal North British Fuzileers [Brereton]. John and his brother Thomas (Private #314) embarked for New South Wales on 12th September 1832 as guards on board the convict ship Camden comprising twenty-nine rank and file of the 21st regiment, accompanied by five women and ten children. Camden left Plymouth on 13th October 1832 and arrived at Port Jackson on 17th February 1833. It was reported that the detachment “marched to the Barracks to the tune of their national music, the bagpipes”.

The Dalton brothers had little time in Sydney leaving immediately on the Guardian for Hobart, Van Diemens Land, less one of their fellow-guards, John Muirhead, who had died shortly after embarking on the ship from England. Just a few months later, a detachment for the Swan River was selected. John sailed with the two companies on the ship Jane on 12th August 1833, comprising six officers, four sergeants and 120 other ranks. John’s brother Thomas was not among this detachment but remained with the 21st Regiment and died in November 1847.

In 1837 the York Military Post boasted two officers, one sergeant and 35 other ranks; the highest quota of troops outside Perth HQ; the district was becoming a hotbed of trouble between the indiginous population and the settlers. John Dalton’s activities in the 21st are not clear from the muster rolls from the time of his arrival in 1833, but in November 1839 the roll shows that he was posted to York. The murder of Sarah Cook and her infant daughter in May 1839 had led to the apprehension of the perpetrators in June 1840 by John Nicol Drummond, appointed Special Constable in Governor John Hutt’s newly created Native Police Force. By this time (in December 1839), the 21st Regiment not only had eight men at the York Military Post, but another two men operating as York Mounted Police. It seems Privates John Dalton and John Reid were in these positions.

In this capacity Dalton and Reid were involved in a case tried at the April 1840 Quarter Sessions as follows: 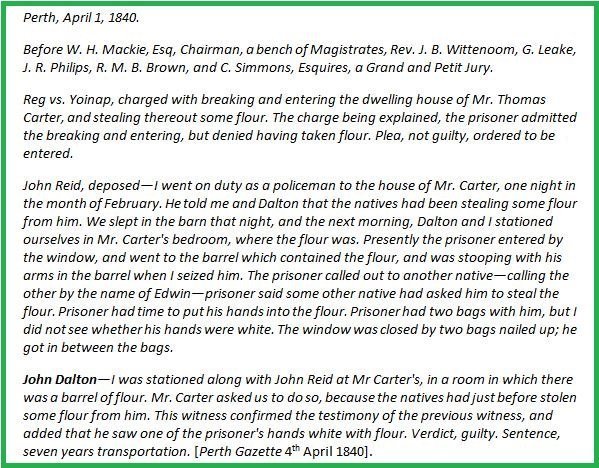 At this time it was known that the 21st detachment would be moving on to duty in India with others of the Regiment from Hobart. John Dalton, decided to request a transfer to the relieving regiment – a detachment of the 51st Regiment – from which he could eventually discharge from the Army and become a settler. At this point he had served only ten years.

Dalton would have known of the first judicial execution in Western Australia which took place at York on 10th July 1840 . The trial of Doodjeep and Barrabong (there are many variations in the spelling of these names) took place at the Quarter Sesssions on 1st July 1840 where both men were sentenced to be executed by being hung [sic] by the neck.

On 1st August 1840 Dalton transferred to the 51st Regiment; the detachment had arrived from Hobart to relieve the 21st on the ship Runnymede on 25th June 1840. Dalton was Private #715 with the 21st and for over two years his service number with the 51st was not recorded. But in January 1843, he appears in the musters as Private #1509.

He remained in York after his transfer and the 51st detachment Musters show that he was stationed nowhere else. Seven months before the 51st detachment moved on to Calcutta, John Dalton drowned crossing the Avon River. The Army recorded his death as variously 18th or 19th August 1846. He left no Will, but his brother Thomas was listed as his next of kin. At the present time it is not known where John was buried.